Tilray stock forecast: can TLRY stock recover from an 88% drop?

Where do the experts see Tilray heading towards the end of 2021 and beyond?

Canadian firm Tilray (TLRY), one of the largest global cannabis companies, has seen its share price plunge more than 88% from its February all-time high and follow a steady downwards trajectory ever since despite a strategy of diversification.

Is there more of a downturn to come or can we expect to see a rebound in the next year?

The TLRY share price started the year at $8.43 before surging more than 700% to hit a peak of $67 on 10 February. The stock skyrocketed thanks to plenty of attention on social media platforms such as Reddit and Twitter.

The retail crowd turned their attention to Tilray ahead of the merger between Tilray and fellow medical marijuana company Aphria, as well as a more favourable political landscape for cannabis producers in some countries. After the US elections in 2020, the Democrats held both the White House and a majority in Congress, boosting optimism that marijuana could be legalised at federal level.

However, the hike was unsustainable and the TLRY share price has trended lower since, losing 83% and hitting a nadir of $10.01 on 18 October.

There have been several attempts to push higher. There was a short-lived 62% rally between mid-May and mid-June after Tilray finalised its merger with Aphria. The deal turned the company into the largest Canadian marijuana producer, boasting a 17% share of the North American retail market with annual revenues of $1bn. The stock rallied to a high of $21.43 per share on 9 June before quickly giving up those gains and extending losses towards $10.

After finding a floor at $10 the share price rebounded, rising 39% between mid-October and mid-November. However, once again the rally higher proved unsustainable and the price quickly moved lower again.

On 7 October 2021, Tilray reported fiscal first quarter results for the period ending 31 August and there was plenty for shareholders to cheer. Net revenue jumped 43% compared to the same period last year. Along with being the largest share of the recreational and medical cannabis markets in Canada, the firm is also the market leader for medical cannabis in Germany. While it doesn’t sell cannabis in the US yet, it is raking in some revenue from beer sales through its SweetWater Brewing Company subsidiary there.

Meanwhile, Tilray also announced $55m in cost-saving synergies from its merger with Aphria, which have gone some way to boosting gross profits by 46% year-on-year to $51m, up from $35m the same period last year. While this is an encouraging number and certainly shows that Tilray is on the right track, the firm still isn’t anywhere near turning profitable. In fact, net losses widened to $34.6m from $21.7m.

In the last quarter quarter, Tilray also completed its acquisition of amendable convertible notes in MedMen, an American cannabis company. However, this would only happen in the case that cannabis is legalised at federal level in the US and even then, Tilray would only own a 21% stake of the company, a small percentage of what is expected to be a huge growth industry. 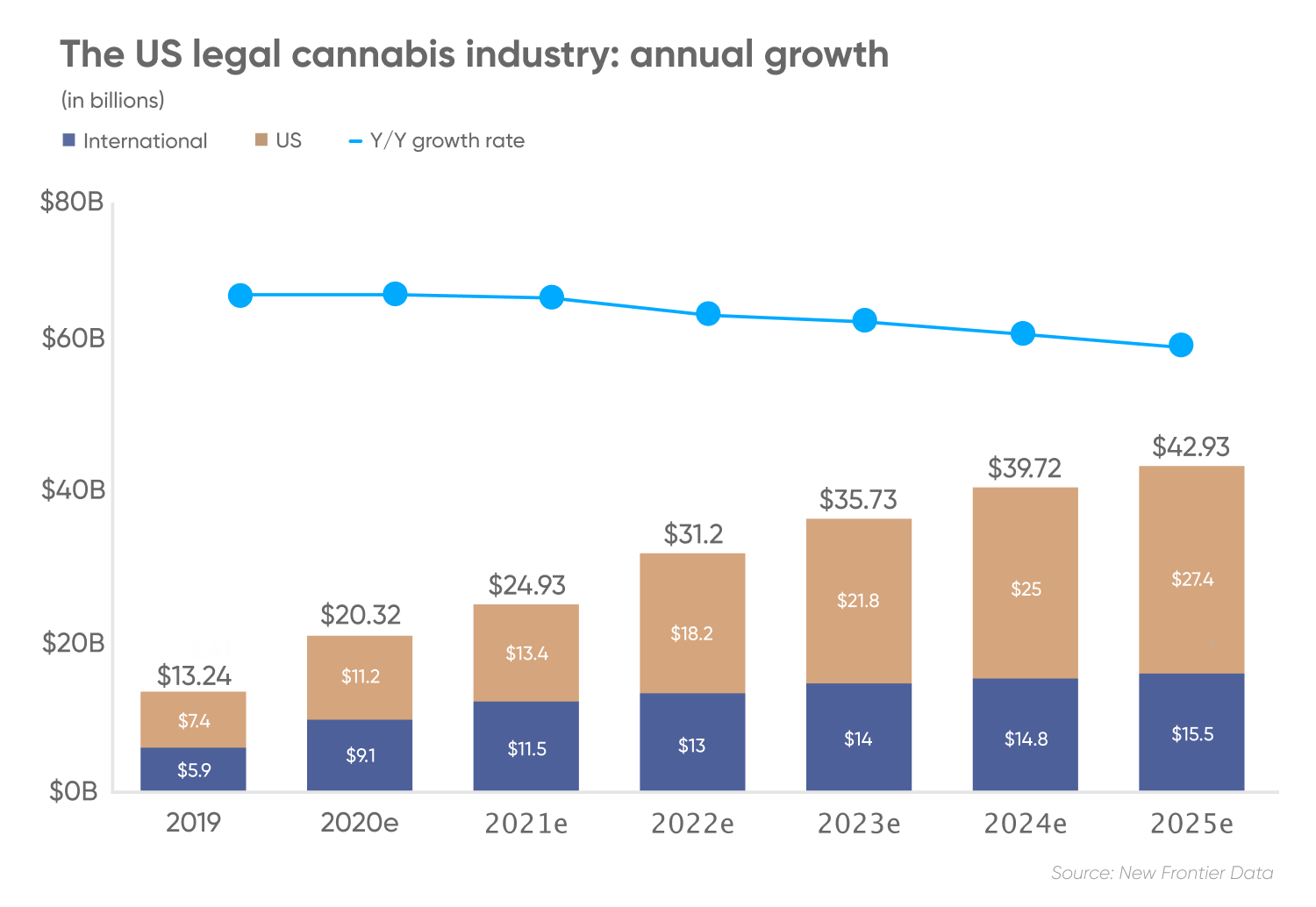 While Tilray continues to wait for cannabis legalisation in the US, the firm is expanding worldwide, particularly in Europe. In the lastest Tilray stock news, the company announced that it had been selected by the Luxembourg Ministry of Health as a certified medical cannabis supplier for the country’s medical cannabis programme. Irwin D. Simon, chairman and CEO, commented following the announcement.

“We believe that Tilray’s growth potential in the European Union represents a $1bn opportunity, and today’s announcement affirms that we are turning potential into performance. With today’s validation from the Luxembourg Ministry of Health, Tilray now offers branded medical cannabis in 20 countries around the world – a testament to our high standards and status as a trusted partner to patients in need.”

In his interview with New Cannabis Ventures, CEO Simon Irwin said that Tilray could generate $4bn of sales in Europe by the end of 2024. However, it’s important to note that  these markets are only just starting to open up to cannabis, making them both small and uncertain.

Covid-19 has been a headwind for Tilray and this could continue to be the case for some time. Tilray management highlighted Covid as the cause of lower net revenue, particularly in Germany. Covid cases in Europe are rising again as winter approaches, which could continue to hamper revenue going forward.

On 8 December Tilray announced what it called the "strategic acquisition" of Breckenridge Distillery, a distilled spirits maker, as part of its ongoing plan to leverage "our growing portfolio of US CPG (consumer packaged goods) brands to launch THC-based product adjacencies upon federal legalisation in the US."

Where do the experts see Tilray heading towards the end of 2021 and beyond?

Tilray shares continue to come under pressure despite revenue growth and margins trending in the right direction. The stock holds number one position for market share in Canada, which leaves little room for opportunity. In fact some analysts believe that the stock is dependent on legalisation in the US for meaningful growth.

In her Tilray stock price forecast, Claudia Valladares, financial adviser at Kovar Wealth Management, highlighted this point in her note to Capital.com: “Tilray's share price heavily depends on what the government will decide on cannabis. If they decide to make it legal, then Tilray's share price will likely increase. It's a risky investment, speculative but it's currently at a reasonable price if an investor wanted to get their feet wet in this industry.”

Emily Flippen, senior market analyst at The Motley Fool, is downbeat regarding the outlook for the stock when speaking to Capital.com.

“Tilray is one of the most widely held cannabis companies, especially amongst retail investors, but its risk still outweighs the potential for reward. Unlike many of its US-based competitors, Tilray has not been able to generate positive operating income, has taken on substantial levels of high-interest debt, and has a history of impairments and asset write-downs. While Tilray has attempted to “roll up” many of its competitors in the industry, these actions have historically resulted in significant shareholder dilution and substantial losses. Tilray’s share price is notoriously volatile, so predicting where it may be over the short-term is a fool’s errand. However, what we do know is that management has a poor track record for long-term shareholder returns and serious financial concerns still plague this business. Investors can do better than Tilray.”

Analysts at Barclays initiated cover on the stock in mid-November classifying the stock as underweight. The analysts set a target price of just $10. The Tilray share price fell over 18% across the course of that same day.

According to MarketBeat, 14 analysts have issued ratings on Tilray over the past 12 months. Three of them issued a buy rating, ten issued a hold rating and one issued a sell rating. The result is a hold consensus rating. The average one-year Tilray share price forecast is $14.35. The high price target is set at $23, while the low is at $10.

Meanwhile, according to forecasting service AIPickup, their TLRY stock forecast is flat projecting that the price will reach $10.68 by 2025 and then land at $10.56 by 2030.

However, it is important to note that analysts and web forecasting services can and do get their predictions wrong. It is always recommended that you carry out your own research and stock analysis taking into account current market conditions.

Tilray has experienced high levels of volatility across this year, rallying to a peak of $67 per share before crashing to below $10 per share. This volatility and the speculative nature of the stock is not for everyone. Whether the stock is a suitable fit for your portfolio depends on your personal circumstances, investment timeframe and risk tolerance.

At the time of writing, the consensus rating was hold, according to MarketBeat. It’s crucial you carry out your own research and analysis of a stock to decide whether it’s a good buy or not.

Whether Tilray’s share price goes up depends on several factors. These could include whether there is progress on federal legalisation of cannabis in the US and how successful Tilray’s broader international expansion is into Europe and emerging markets.

Rate this article
Rate this article:
72% 28%
Ready to get started?
Capital.com Download
The difference between trading assets and CFDs
The main difference between CFD trading and trading assets, such as commodities and stocks, is that you don’t own the underlying asset when you trade on a CFD.
You can still benefit if the market moves in your favour, or make a loss if it moves against you. However, with traditional trading you enter a contract to exchange the legal ownership of the individual shares or the commodities for money, and you own this until you sell it again.
CFDs are leveraged products, which means that you only need to deposit a percentage of the full value of the CFD trade in order to open a position. But with traditional trading, you buy the assets for the full amount. In the UK, there is no stamp duty on CFD trading, but there is when you buy stocks, for example.
CFDs attract overnight costs to hold the trades (unless you use 1-1 leverage), which makes them more suited to short-term trading opportunities. Stocks and commodities are more normally bought and held for longer. You might also pay a broker commission or fees when buying and selling assets direct and you’d need somewhere to store them safely.
Capital Com is an execution-only service provider. The material provided on this website is for information purposes only and should not be understood as an investment advice. Any opinion that may be provided on this page does not constitute a recommendation by Capital Com or its agents. We do not make any representations or warranty on the accuracy or completeness of the information that is provided on this page. If you rely on the information on this page then you do so entirely on your own risk.
Share Article
How has the stock performed so far in 2021? What did we learn from fiscal Q1 2022 results? Where do the experts see Tilray heading towards the end of 2021 and beyond? FAQs