By Nicole Willing and Peter Henn

The Terraform Labs stablecoin UST and its accompanying LUNA cryptocurrency token collapsed in May, sending shockwaves throughout the crypto markets from which they have yet to recover. But in an attempt to restore the ecosystem, Terra relaunched its LUNA token with a 2.0 version at the end of May.

The LUNA 2.0 token launched on 28 May 2022 and immediately plunged in value by 74%. It then fell by another 60%, but has since stabilised somewhat.

In this article we look at what happened to LUNA and the launch of the new token, and examine some of the LUNA 2.0 price predictions that were being made as of 12 October 2022.

Terra attempts to rebuild with LUNA 2.0

The project ironically aimed to drive the adoption of blockchain and cryptocurrency technology by focusing on price stability and user experience.

Terra focused on creating algorithmic stablecoins such as TerraUSD (UST), which maintained its peg to the US dollar through a swapping mechanism with the LUNA token that enabled users to redeem 1 UST for $1 worth of LUNA tokens.

UST depegged from the US dollar over a few days from 9 May 2022, collapsing by 12 May and causing hyperinflation as sales of UST resulted in the minting of billions of LUNA tokens.

On 28 May, Terra relaunched the LUNA token without UST as a hard fork, or spin-off, of the blockchain. According to the project’s migration documentation, the “original Terra has rebranded to Terra Classic and a new chain is created with the existing Terra name… The original Cosmos chain will still run, with market swaps (mint/burn function) disabled.”

“The new chain is also a Cosmos chain, but will not have the treasury, oracle, or market modules of the original chain. The new chain’s native mining token will be LUNA. There will be no Terra stablecoins (UST, KRT, EUT, etc.) on the new chain.”

The initial maximum supply of LUNA coins on the new Terra chain is just over one billion, of which 127.4 million were in circulation at the time of writing on 12 October.

“The mint module will release new coins every block as staking rewards at a default rate of around 7% [per annum],” the documentation said. 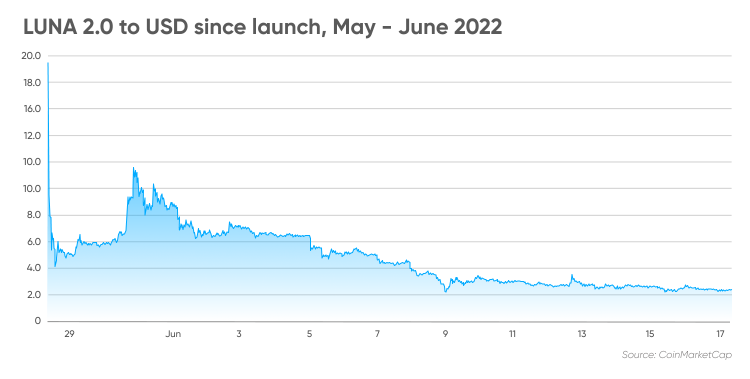 Let's now take a quick look at the LUNA 2.0 price history, or at least the new version of it. While past performance should never be taken as an indicator of future results, knowing what the crypto has done in the past can help give us context if we want to either examine a LUNA price prediction or make one of our own.

Although the price moved back up to $11.97 on 30 May 2022, it fell again and by 8 June reached an intraday low of $1.96. Things got worse after the cancellation of withdrawals on the Celsius (CEL) crypto lending platform confirmed the bear market, and LUNA sank to a low of $1.66 on 18 June.

While there was some recovery after that, with LUNA trading at above $2 in early July and the start of April, there was still downward pressure and, on 29 August 2022, the coin reached an all-time low of $1.53.

How do analysts view LUNA 2.0?

“Terra has already caused enough harm to individuals and the crypto market as a whole.”
by Mads Eberhardt, Saxo

Mads Eberhardt, a cryptocurrency analyst at Dutch bank Saxo, commented following the LUNA 2.0 launch that Terra “is somewhat ignoring that it has caused a meltdown worth billions”.

The UST collapse wiped out a total market capitalisation of $58bn, of which UST accounted for $18bn and LUNA $40bn.

“At some point, one should acknowledge one’s defeat and let a project die out. Terra should have been such a project,” the analyst said in a note published on 30 May.

“In our view, Terra has already caused enough harm to individuals and the crypto market as a whole. It genuinely seems the people behind Terra believe that they can always give it a new shot, in case their first effort did not turn out well, thus neglecting that their flawed design has already caused a meltdown worth billions.

“The case of Terra does not put the crypto market in a good light nor does the Terra 2.0 narrative of ‘let us just try again’. The crypto market should focus on projects that create value to become something else than a speculative asset class.”

Anders Helseth, a senior analyst at cryptocurrency research firm Arcane, pointed out that Terra’s stablecoin UST “worked as the perfect exit liquidity in what can be described as a prolonged pump and dump scheme”.

“A combination of LUNA supply control, the psychology of the dollar, and guaranteeing high yields secured with their own pre-mined tokens created sustained exit liquidity,” he said in a note.

As the Terra protocol had no built-in inflation mechanism, early token holders had two ways to profit – selling tokens to new token buyers or holding the tokens until they appreciated in theoretical paper value.

“No block reward and a highly concentrated LUNA supply gave all power to the early holders,” Helseth wrote.

“Terra blockchain data shows that wallets connected to Terraform Labs and the large early LUNA holders have made tremendous profits… sets of John Doe wallets interacting closely in clusters have massive net outflows from the Terra ecosystem to bridges and centralised exchanges.

“The common denominator among the clusters is that one or more wallets in the cluster received significant transfers from Terraform Labs wallets or the largest John Doe wallets as of 3 October 2020.

“From October 2020 to 5 May 2022, the clusters have net outflows of $6 billion to exchanges and through bridges (flow value calculated by using market prices at the time of transfer). In contrast, all the other hundreds of thousands of wallets have a net inflow of $6.5 billion.

“By pumping the LUNA token, the burn/mint mechanism, and creating a sustained demand for the UST token through Anchor, the perfect exit liquidity for large LUNA bags was created. And the UST exit gates were used at scale for a set of very early LUNA holders. At best, the profits can be described as collateral winnings in a failed bootstrapping attempt.”

There were claims that Terra’s co-founder Do Kwon cashed out to the tune of $2.7bn in the months ahead of the UST crash, which he refuted in a Twitter thread.

The yellow flags included the fact that UST was an algorithmic stablecoin and that Terra is highly centralised around Do Kwon.

The red flags included the fact that Terra offered 19.5% in annual Interest through the Anchor protocol, paid from its reserves; and that Anchor held 75% of the Terra supply – unlike Ethereum, for example, which has a rich ecosystem of decentralised applications (dApps).

Do Kwon raised further red flags with instant plans to relaunch LUNA as a standalone token without the stablecoin, and by changing the proposal after voting began. That the vote still passed was another red flag, according to Hargrave.

“You'd have to be a LUNAtic to re-invest. As value investors, ask yourself: Where’s the value? Is Terra, the technology, really providing additional value to the world?” Hargrave wrote.

“Creating a new token out of thin air, getting rid of the stablecoin, and pretending as if nothing happened: How is that creating value? This is crypto, so anything could happen.”

With that all out of the way, let’s take a look at some of the LUNA 2.0 price predictions that were being made as of 12 October 2022.

It is important to remember that price forecasts, especially when it comes to something as volatile as cryptocurrency, are often wrong. Also, we should point out that long-term crypto price forecasts are often made using an algorithm, which means they can change at any time.

Next, Coin Codex had a short-term LUNA 2.0 price prediction for 2022 that argued the coin could drop to a little below $1.54 by 17 October. The site said that it considered the overall analysis for LUNA to be bullish, though, saying it had 16 indicators that were bullish, and just four that were sending out bearish signals.

That was as good as the site thought things could get, though, saying that by September 2027 LUNA should be worthless. There was also no prognosis of a recovery, with its LUNA 2.0 price predictions for 2030 and 2040 both coming in at $0, making it a de facto dead coin.

Finally, WalletInvestor was a lot more optimistic when it came to making its Terra 2.0 price prediction. The site said that the coin could rise to reach a potential $34.64 in September 2023 and then hit a little below $160.23 in five years’ time.

When considering a LUNA price prediction, it’s important to keep in mind that cryptocurrency markets remain extremely volatile, making it difficult to accurately predict what a coin or token’s price will be in a few hours, and even harder to give long-term estimates. As such, analysts and algorithm-based forecasters can and do get their predictions wrong.

What is Terra Luna 2.0? Everything you need to know about Terra’s fork

THOR price prediction: What is THOR?