Is Shopify a good stock to buy? Analyst ratings

After a bumper pandemic, Shopify now powers over one million businesses in more than 175 countries, with its platform used by brands such as Gymshark, Heinz (KHC) and Staples. May 2022 saw the firm announce its largest ever acquisition – a $2.1bn deal for logistics and delivery startup Deliverr.

The past three months have seen the Shopify share price plummet. Today (10 May) it’s down over 80% on its November 2021 high. The most recent Shopify earnings report proved a mixed bag, and investors are on high alert for signs that online shopping is running out of steam.

Can the e-commerce giant keep up momentum? We take a look at the latest Shopify stock forecast.

The rise was driven by the development of an Amazon-style fulfilment centre and soaring customer numbers, which saw Shopify reach one million users by October 2019.

As the pandemic forced physical stores to close, consumers flocked online, and 2021 marked Shopify’s ‘biggest year ever’, with the number of merchants using Shopify almost doubling. 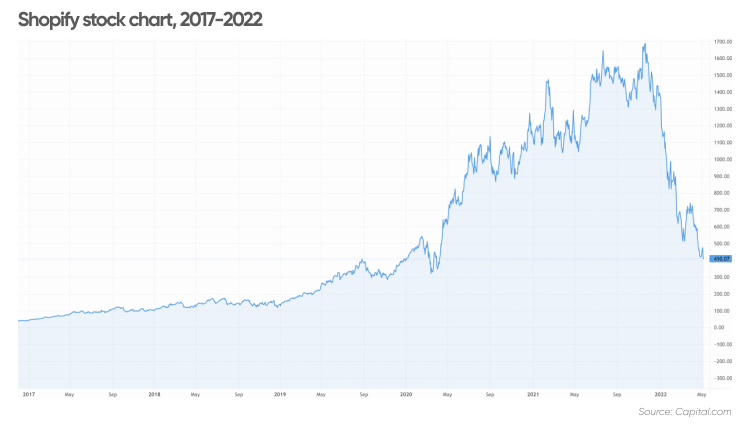 The new year heralded even more share price volatility when fourth-quarter and full-year results were announced on 16 February 2022. Despite positive earnings figures, CFO Amy Shapero raised the prospect of decelerating retail sales. The share price dropped by over 15% in the days following results.

On 11 April 2022, Shopify proposed a 10-for-1 stock split, along with plans to protect CEO Tobi Lukte’s voting power, preserving “stability of leadership”.

The press release stated that the planned share split would also “make share ownership more accessible to all investors”, but markets were not reassured. The Shopify share price reached a post-pandemic low of $416.20 on 27 April 2022, and was again rocked by financial results released on 5 May.

Mixed second-quarter results saw the share price fall by almost 10% on 5 May as investors feared a slowdown in the pace of online shopping.

Looking at the Shopify stock technical analysis, the relative strength index (RSI) reading was ‘bullish’ at 29.5 as of the time of writing (10 May). This figure suggests that the stock is undervalued and could see an upwards breakout.

The first quarter of 2022 saw the e-commerce giant report revenues of $1.2bn. Though this represented a 22% year on year increase, it did mark a deceleration in its rate of revenue growth.

The first three months of the year saw Shopify post a net loss of $1.5bn, compared with net income of 41.3bn for the first quarter of 2021.

Gross Merchandise Volume (the value of products sold on the platform) increased 16% year on year, however this was roughly half the growth rate reported in Q4 2021.

But in a show of the company’s enduring confidence in e-commerce, 5 May also saw Shopify announce its $2.1bn acquisition of Deliverr, a US based fulfilment start up.

Shopify described the move as “doubling down on logistics to help merchants adapt and thrive”. The company hopes to use the Deliverr’s logistics capabilities to facilitate reliable next-day and two-day delivery.

The biggest question mark hanging over Shopify’s stock price forecast is whether demand for online retail will keep pace as the pandemic recedes.

Analysts have been generally confident that pandemic-induced shopping habits will persist, with Deloitte’s 2022 Retail Industry Outlook finding that even though customers are more comfortable returning to stores, “their preference for online channels remains higher than before the pandemic”.

What is your sentiment on SHOP?

Give SHOP a try

What’s more, with US inflation hitting 8.5% in March, shoppers are feeling the squeeze. Shopify’s earnings release acknowledges that the “effects of an inflationary environment on consumer spending” could, alongside other headwinds, prove to “be dilutive to operating margin this year”.

But some analysts are confident that Shopify’s model could leave it better placed than rival payments platforms.

Unlike newer rivals, Shopify operates as a ‘two-sided’ product: a check out solution for customers that has also been adopted by merchants. And this could leave it better placed to withstand a challenging macroeconomic climate.

“In our view, during the past ten years, new payment methods have found success first by owning one side of the network––either the consumer or the merchant––and then extending distribution to the other side,” said ARKInvest analyst Maximilian Friedrich in a 2 May note.

“Consumer-facing payment startups Fast and Bolt learned the hard way how difficult it is to scale into a two-sided product.”

Is Shopify a good stock to buy? Analyst ratings

Further pessimism followed on 3 May, with Wedbush’s Ygal Arounian lowering his Shopify price target from $937 to $630, and Loop Capital’s Anthony Chukumba cutting his from $660 to $460 – which represented just a 0.26% upside on the report date share price.

Desmond Lau at Veritas Investment Research was even more bearish. After Shopify’s first-quarter results were released, he downgraded the stock from a ‘buy’ to a ‘sell’ rating. On 5 May, analysts at Jefferies lowered their Shopify price target from $1,350 to $550 – a drop of almost 60%.

It’s worth noting that analyst predictions are frequently wrong, and a Shopify share price forecast is no substitute for your own research. Always perform your own due diligence before investing. And never invest or trade money you can’t afford to lose.

Looking to the longer term, algorithm-based forecasting service Wallet Investor rated Shopify a “very good long-term investment” at the time of writing (6 May).

Wallet Investor’s Shopify stock predictions use the historical data to inform the stock’s future price movements. The service saw the share price reaching $450.2 by May 2023 and hitting $544 by May 2024.

Note that algorithm-based price predictions can be wrong. Forecasts shouldn’t be used as a substitute for your own research. Always conduct your own due diligence before investing. And never invest or trade money you cannot afford to lose.