A growth spurt that lifted the stock price of intelligence software company Palantir Technologies (PLTR) out of the doldrums may have run out of puff for now as the price has declined 13% this week to open at $12.84 today (8 April).

In the second half of March the stock rode a wave of market high tech sentiment - and then some - to lift itself by over 40%.

The stock had plunged to an all time low in February shortly after its fourth quarter results which disappointed the market and the stock price dropped 25%.

Those results showed revenues had risen 34% year on year but it was the losses that disappointed the market - an operating loss of $59m leaving earnings per share at 2 cents where the analysts had been hoping for 4 cents.

The company produces software platforms widely used by the US intelligence community but has been trying to find new markets for the systems. Over the year its commercial revenue grew 34% year-over year to $645m while its government revenue grew 47% to $897m.

As an outlook the company said it expected $443m in revenue for the first quarter 2022.

Clearly the stock has struggled for some time but with a strong balance sheet, no debt and growing margins, will Palantir prove to be a good long-term investment? Is PLTR stock currently a buy, sell or hold? We look at the company, its fundamentals and the latest Palantir price predictions. 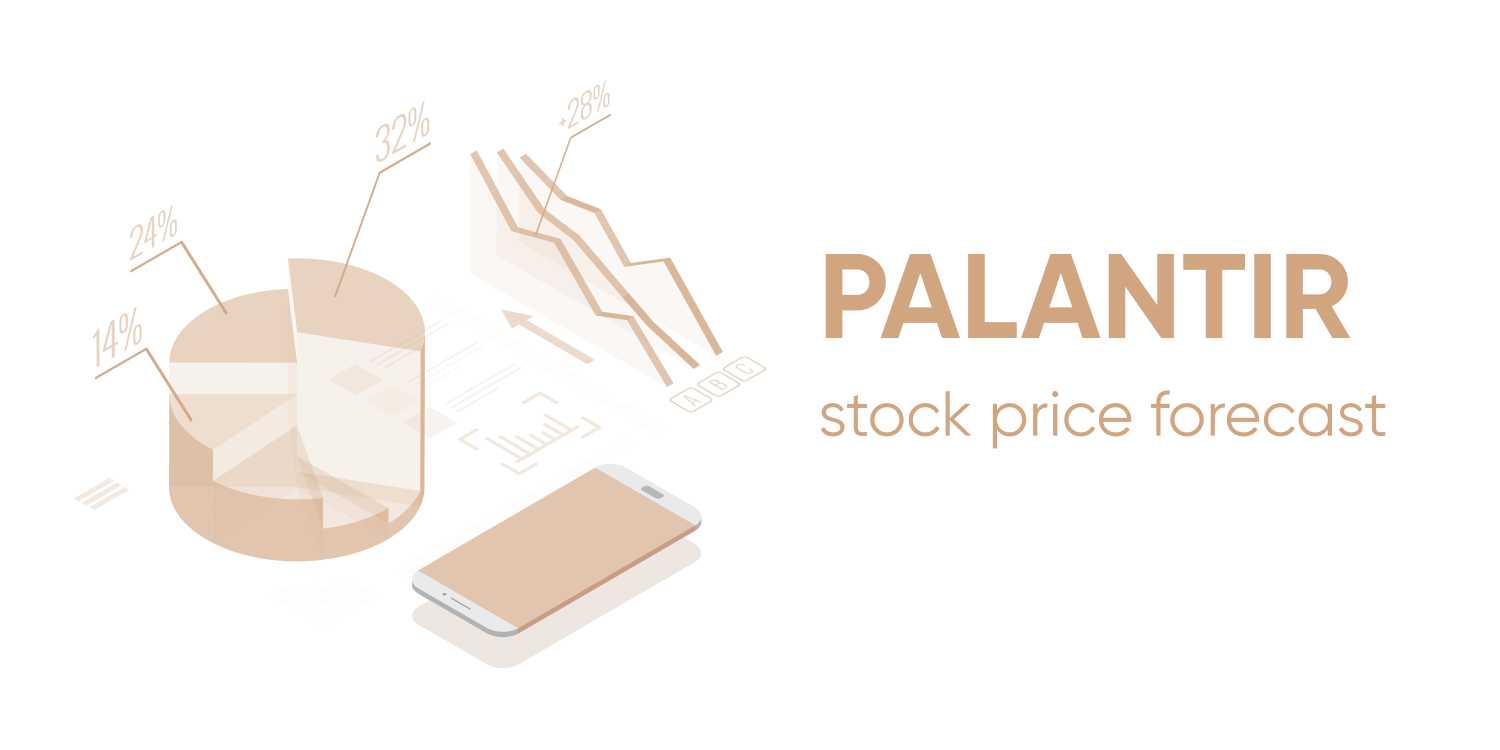 Palantir was founded in 2004 by a group of investors including Peter Thiel, co-founder of PayPal. The company debuted on the New York Stock Exchange through an initial public offering (IPO) on 30 September 2020, where it closed on its opening day of trading at $9.50.

Having held a steady base following a seemingly speculative peak of $39 on 27 January 2021, the Palantir share price has been on a downward trajectory since a 9.35% contraction on 9 November 2021.

The last week continued to demonstrate a sustained selloff for Palantir stock, which contracted by 7.46% on 21 January.

The selloff of Palantir stock follows a pattern exhibited across the tech sector, demonstrating two years of a sustained bull market that heavily favoured tech stocks. The Nasdaq 100, a tech-heavy index which grew by nearly 30% in 2021, has contracted by 13.16% in January so far. PLTR stock predictions are accordingly coming from a base of uncertainty.

Palantir share price technical analysis shows some pessimism remains around a stock already in the midst of heavy losses. One-day oscillators had the stock in bearish territory at the time of writing, with a relative strength index (RSI) reading of a neutral 36.9 while a MACD level of -0.28 was giving a sell signal at the time of writing (8 April). 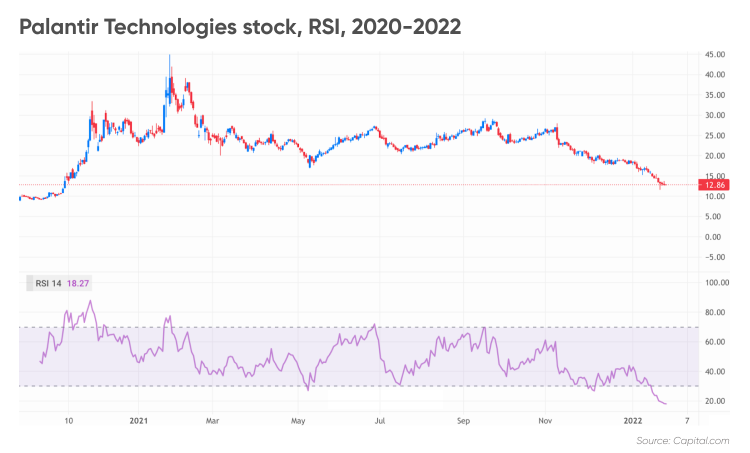 With each passing year, the artificial intelligence (AI) market is continuing to increase its footprint as it embeds itself in the structural framework of the commercial and government sectors.

According to research from Gartner, the worldwide AI software market is forecast to grow by 21.3% in 2022, amounting to more than $62bn (£46bn). This includes a 31.5% growth in knowledge management and 20.1% growth in autonomous vehicles.

It is a trend indicative of increased awareness in the benefits of AI among companies, and of increased demand, with a Gartner survey suggesting that among all chief information officers asked, 48% said that they had deployed or intended to deploy AI and deep learning machine technologies in the next 12 months. 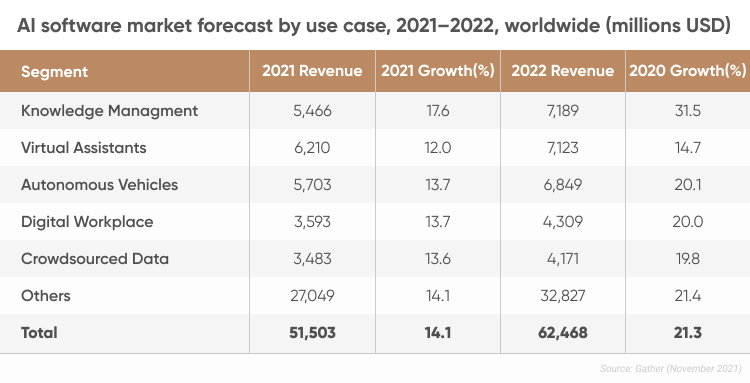 The engines for this growth are accordingly myriad. One study projects cybersecurity-driven AI to build revenue at an annual rate of 23.6%, reaching $46.3bn by 2027. Palantir’s InfoSec technology will hope to enjoy a healthy portion of this growth, while the company tries to extend its reach across AI’s potential.

Palantir’s earnings figures for the third quarter of 2021, released on 15 November 2021, proved to accelerate the stock’s climbdown from recent highs and back towards its IPO price, despite general signals of a strong balance sheet.

Total revenues grew by 36% year-on-year, hitting $392m in Q3 2021. Extra revenue was acquired through the onboarding of new customers (organisations), with customer count reaching 203 compared with 142 in the prior year quarter, while commercial customers grew by 46% since Q2 2021.

Revenues are split between Government, up 34% from a year ago, and Commercial, up 37%. The group saw Government revenue grow on the back of new deals with the armed forces, the space force and the US Department of Health and Human Services, among others in 2021.

The resilience and funding of these departments could give investors an extra incentive to buy Palantir stock ahead of AI firms with a stronger commercial footprint, particularly as markets turn more bearish.

US military spending as a percent of GDP rose between 2017 and 2020 to 3.741%, while US health expenditure accounted for 19.7% of US GDP in 2020, representing $4.1trn. Even a fraction of those proceeds could help Palantir’s burgeoning balance sheet. 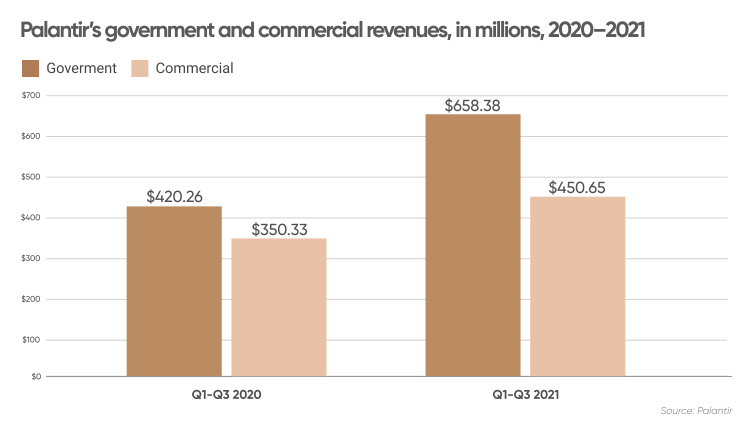 Adjusted earnings per share (EPS) of $0.04 exceeded analysts’ estimates by $0.01, however the company did experience a loss of $102m, for GAAP net loss per share of $0.05. The notable difference between GAAP and non-GAAP comes from stock-based compensation, with the company having spent $611m on this channel through the first nine months of 2021.

This has allowed Palantir to free up significant levels of cash reserves, which measured $2.4bn as on 30 September 2021. This could point to a company with a strong balance sheet less reliant on debt, which should embolden Palantir as monetary policy starts to move contractionary this year.

Palantir’s positive cash flow is anomalous across high-growth tech stocks. The software firm’s decision to repay all of its debtors meant that Palantir, compared with similar market-cap tech stocks, in some cases had more than $1bn difference in debt levels.

At the same time, the company continued to add cash from operations, adding $240m in the first nine months of 2021, compared with MondoDB which lost more than $15m, and ANSYS’s $448m cash addition, although with long-term debt levels of $753m. 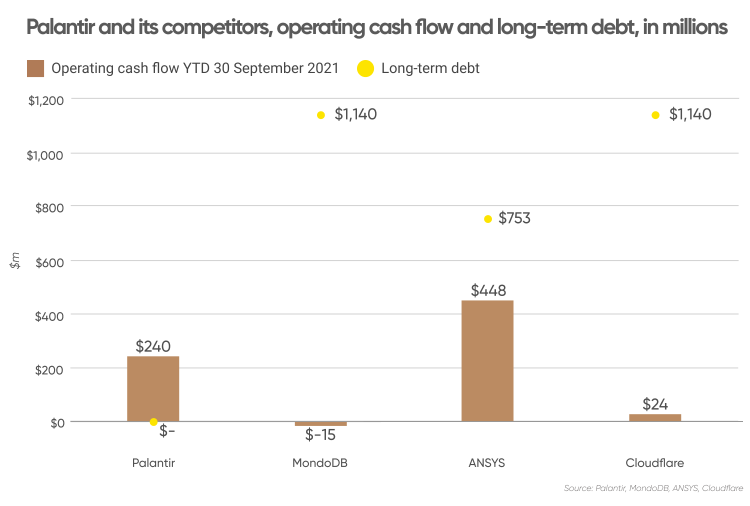 While the company’s ability to deliver cash without addressing debt does point to security, it may also cause the group to experience quick devaluations to its cash levels as inflation, running at 7% for the US in December, also works to devalue the debt levels of Palantir’s competitors over time.

As huge levels of cash continue to burn a hole in Palantir’s pocket at the expense of stock issuing or reinvestment, investor selloffs may continue in the same vein.

But strong cash levels are accompanied by growing efficiency in Palantir operations, with the company’s margins increasing from 11% in the first nine months of 2020 to 32% in the first nine months of 2021, and a five percentage point increase between Q3 2021 and Q3 2020. This indicates the company’s balance sheet has strong upside to return gains in its price in the long run.

The company raised its guidance for the year at its last earnings call, projecting full-year revenue growth of 40% to $1.53bn for 2021, with free cash flow expectations raised by more than $100m to over $400m, with a longer-term revenue outlook of 30% or more per year between 2021 and 2025.

Palantir share price forecasts as of 8 April, showed an average upside of 20% to a price target of $15.38 for the next 12 months, ranging from the high of $25 to the low of $9, according to eight analyst views compiled by MarketBeat.

The stock had a consensus ‘hold’ recommendation at the time of writing (8 April), with two analysts rating it as a ‘buy’, four as a ‘hold’ and another two as a ‘sell’.

Deutsche Bank provided a downgrade prediction from $25 to $18 on 21 January 2022, which helped the company’s share price fall by 9.63% on the same day. Yet this still represented a 23.12% upside on report day, which could be suggesting some overzealousness in the selloff.

However, it may look more rational in the context of previous downgrades, including Jefferies Financial Group’s reduction in its PLTR stock price target from $31 to $24, at the time still a 43.37% upside. 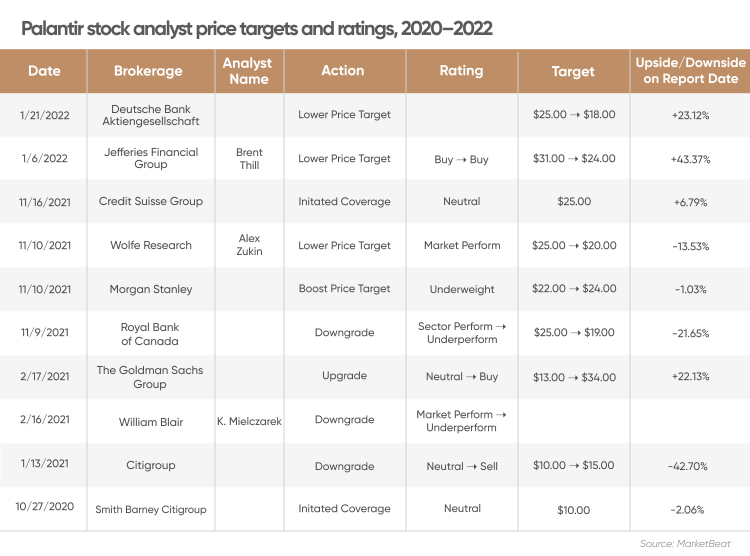 Wallet Investor’s Palantir stock price prediction indicated sustained decline over the medium term. The algorithm-based forecasting service projected a price target of $5.13 for this time next year. However for five years’ time, in March 2027, the service forecasted Palantir to be effectively zero.

Note that analyst PLTR predictions can be wrong. Forecasts shouldn’t be used as a substitute for your own research. Always conduct your own due diligence before investing. And never invest or trade money you cannot afford to lose.

Natural Gas 2.860
Trade
+0.740%
US100 12164.8
Trade
+1.340%
BTC/USD 23139.65
Trade
+0.120%
XRP/USD 0.41076
Trade
-0.600%
ETH/USD 1590.29
Trade
-0.630%
The difference between trading assets and CFDs
The main difference between CFD trading and trading assets, such as commodities and stocks, is that you don’t own the underlying asset when you trade on a CFD.
You can still benefit if the market moves in your favour, or make a loss if it moves against you. However, with traditional trading you enter a contract to exchange the legal ownership of the individual shares or the commodities for money, and you own this until you sell it again.
CFDs are leveraged products, which means that you only need to deposit a percentage of the full value of the CFD trade in order to open a position. But with traditional trading, you buy the assets for the full amount. In the UK, there is no stamp duty on CFD trading, but there is when you buy stocks, for example.
CFDs attract overnight costs to hold the trades (unless you use 1-1 leverage), which makes them more suited to short-term trading opportunities. Stocks and commodities are more normally bought and held for longer. You might also pay a broker commission or fees when buying and selling assets direct and you’d need somewhere to store them safely.
Capital Com is an execution-only service provider. The material provided on this website is for information purposes only and should not be understood as an investment advice. Any opinion that may be provided on this page does not constitute a recommendation by Capital Com or its agents. We do not make any representations or warranty on the accuracy or completeness of the information that is provided on this page. If you rely on the information on this page then you do so entirely on your own risk.