Natural gas was one of the strongest markets in 2022, substantially outperforming other commodities as well as more traditional asset classes such as stocks and bonds.

Natural gas prices have risen considerably since the conflict in Ukraine started in February 2022. This event precipitated a catastrophic energy crisis in Europe throughout the course of the summer, which impacted worldwide markets and has yet to be resolved.

In the United States, the Henry Hub price of natural gas had a wild year. After soaring by as much as 170% from $3.5/MMBtu in early January to $9.97/MMBtu in August, the highest level since July 2008, US natural gas prices plummeted by 40% between their summer peak and early December.

EU Dutch TTF prices, Europe's benchmark for natural gas, skyrocketed from roughly €70/MWh prior to the start of the war to an all-time high of €350/MWh in August before falling to €130/MWh in early December.

Will natural gas be able to repeat its excellent performance next year, or will a recession in the first quarter of 2023 accelerate the decreasing trend that began in the autumn? 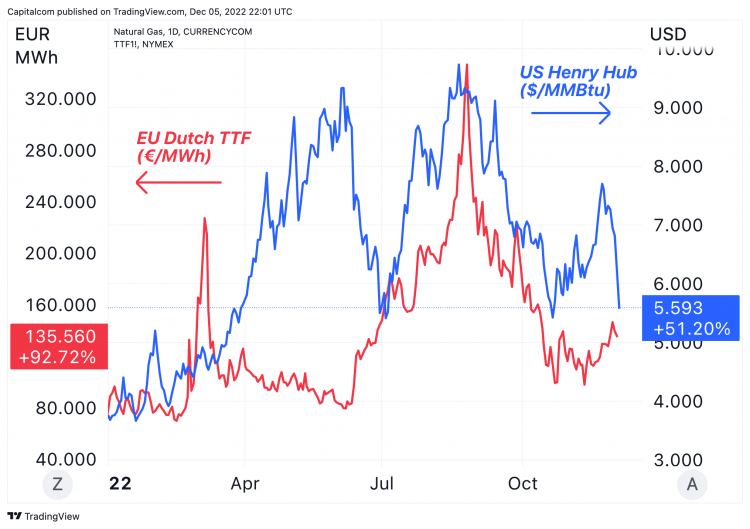 Natural gas was one of the best-performing asset classes in 2022.

As of December 5th, the year-to-date increase in US Henry Hub natural gas prices was 51.2%, the highest annual increase since 2016 and up from the 47% recorded in 2021.  EU Dutch TTF prices have climbed by 92.7% year to date, but lower than the 262% spectacular performance experienced the previous year (2021).

The real start of the natural gas crisis in Europe actually was in the summer of 2021, when a drop in wind energy generation led to an increase in gas consumption at the same time that Russia began to restrict supply.

The Ukraine crisis has further exacerbated an already tight market, with Gazprom opting to suspend gas supply via the Nord Stream pipeline before summer 2022, forcing Dutch TTF prices to reach an all-time high of almost €350/MWh on August 23, 2022.

Henry Hub prices have risen as a result of increased price premiums of LNG exports from the United States to Europe. The Northern Hemisphere's mild winter so far has prevented an early seasonal depletion of gas supplies in Europe and the United States, which are still at adequate levels. As a result, natural gas prices have been under pressure, falling rapidly from the sky-high levels seen in the summer.

High levels of gas reserves in the US and Europe have given the natural gas market a cushion in the short term to prevent price spikes leading up to the winter of 2022–2023. Nevertheless, natural gas demand is very sensitive to factors such as the typical severity of winter and the geopolitical concerns produced by the conflict in Ukraine.

As of early December 2022, Europe's gas storage levels were 92% full, a very high level for the time of year and near to 10-year highs due to milder weather conditions heading to the winter.

Most EU countries' gas storage levels are well above their 5-year averages, but key questions depend on how European reserves will be refilled after winter, assuming that Russian supplies do not resume.

In fact, when operating at full capacity, Nordstream 1 and 2 were able to cover up to 31% of total European gas demand. Thus, if the pipelines are irretrievably lost, European will have to act swiftly to fill the structural gas shortfall. 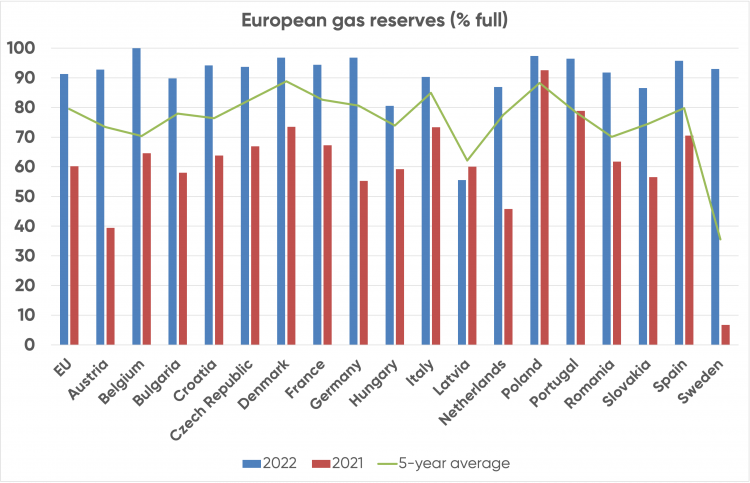 When winter ends in Europe, at around the end of the first quarter of 2023, the need to replenish gas reserves could result in a rise in seasonal demand for natural gas from other suppliers, such as LNG from the United States and Asia.

As European gas reserves dwindle, seasonal demand may drive up gas prices in Europe ahead of the summer. The natural gas market could confront a fresh period of acute tightness, exerting upward pressure on prices, if China reopens its economy in the first half of 2023 and gas production is not increased substantially elsewhere.

However, a US recession may weigh on US natural gas demand, forcing prices to decline, but a price premium greater than the pre-Ukraine war period is expected to exist for a longer period of time in this market.

US Natural gas price performance during the most recent US recession

Since natural gas is an energy commodity, its price is influenced by the economy's growth rate. Other things being equal, increased economic growth raises demand for natural gas, placing upward pressure on prices.

A recession, on the other hand, leads to less consumption and, as a result, poorer performance, as has historically been the case in previous US economic recessions.

The Henry Hub price decreased by 42% from March to November of 2001. During the Great Financial Crisis, the price of natural gas fell by 47% between December 200 and June 2009.

In the first months of the pandemic in 2020, from February to April, the price of the Henry Hub increased by nearly 4% since rising household gas consumption as a result of lockdowns more than compensated for the drop in industrial demand.

Natural gas price seasonality: Why winter is not bullish for prices 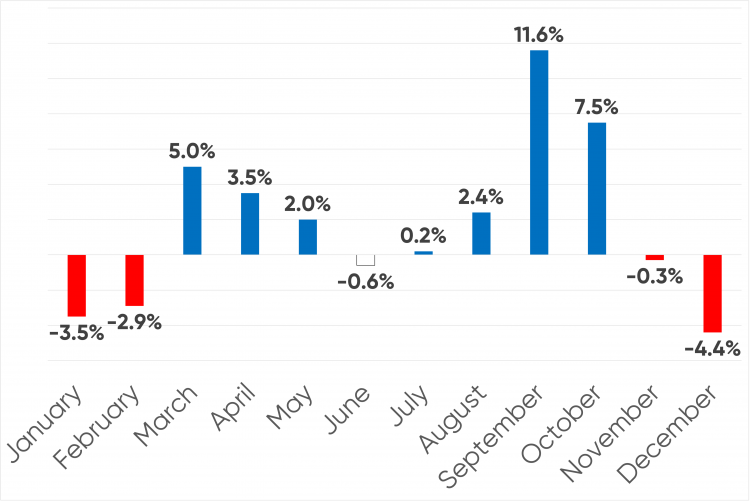 The seasonality of US natural gas prices is quite strong, yet contrary to popular beliefs, winter months have historically been unfavorable for this market.

When analyzing the performance of Henry Hub natural gas prices from 1990, the months of November through February showed negative average performances, with monthly returns of -0.3%, -4.4%, -3.5%, and -2.9%, respectively. Since winter stock levels are normally highest in December and January, these two months experienced the lowest natural gas average performance.

In contrast, natural gas tends to rise in the spring when reserves are at their lowest after the winter, and again at the end of the summer between August and October when reserves must be replenished in anticipation of the upcoming winter. 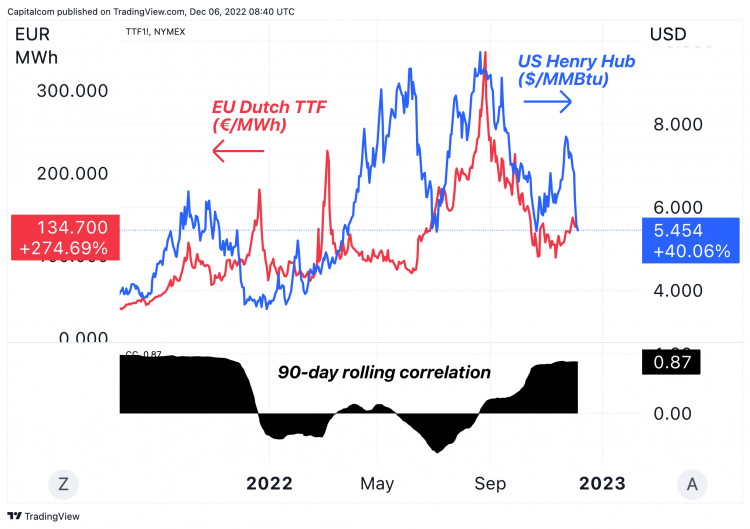 The relationship between the two major natural gas benchmarks, the EU Dutch TTF and the US Henry Hub, has increased this year, with the 90-day rolling correlation coefficient rising to 0.88 as of early December 2022 from negative levels at the beginning of the year (-0.38).

Currently, the link between the two gas markets is contingent on a number of factors relating to the equilibrium of supply and demand. Specifically, the focus is mostly on European developments, which were the primary factor in the summertime escalation of natural gas prices in the United States.

The amount of gas reserves in Europe, the weather, especially whether or not the winter will have colder or warmer temperatures than average, are very sensitive factors to changes in the price of Dutch TTF, which has an impact on the demand for LNG from the United States and, consequently, on domestic Henry Hub prices. 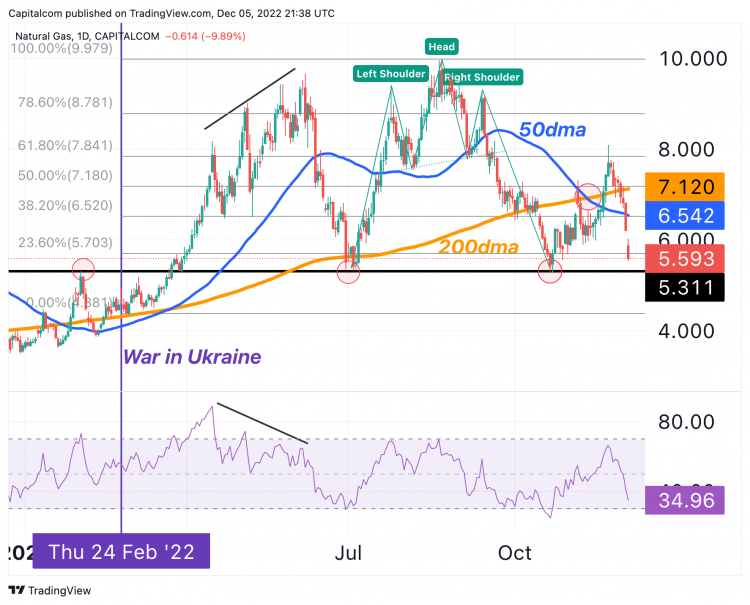 In the daily natural gas price chart updated to December 5, 2022, the recent price action witnessed eight consecutive sessions in the red, with prices falling rapidly and breaking below the moving supports of two moving averages (50dma and 200dma) and some key Fibonacci retracement levels, such as the 50% retracement of the post-Ukraine war rally to August highs.

Natural gas completed a head-and-shoulders pattern in the summer, falling back below $5.30/MMBtu price support. Bearish RSI divergence between April and June 2022 preceded that technical pattern and also resulted in significant bearish price action to the $5.30 support level.

This level indicates a particularly important confluence zone, as demonstrated by the double bottom in October and July, as well as the strong technical resistance between November 2021 and March 2022.

If the conflict in Ukraine continues, it's quite unlikely that prices would fall back to the $4.3 level, which is the area at which they traded on February 24, 2022, when Russia invaded Ukraine. As a result, bulls may resurface on dips between $5 and $5.30. If that doesn't happen and natural gas prices break below $4.30, the 2022 lows of $3.5 may serve as a major support level.

Looking at the upside, the insane price levels witnessed in the summer of $9.5 or more are also unlikely to be retested, since they correspond to an unprecedented supply crisis in Europe which caused a jump in US domestic prices due to higher LNG exports.

A sideways market trend with prices ranging from $4.30 to $8 appears to be a probable scenario for US natural gas in the first quarter of 2023. The bullish market phase may occur after the first months of next year when gas reserves in Western economies begin to dwindle and demand for refilling stocks resumes its cyclical comeback.

Natural Gas 2.696
Trade
-5.600%
Oil - Crude 78.67
Trade
-1.040%
Gold 1929.38
Trade
+0.070%
Oil - Brent 85.29
Trade
-0.960%
Silver 23.774
Trade
+0.750%
The difference between trading assets and CFDs
The main difference between CFD trading and trading assets, such as commodities and stocks, is that you don’t own the underlying asset when you trade on a CFD.
You can still benefit if the market moves in your favour, or make a loss if it moves against you. However, with traditional trading you enter a contract to exchange the legal ownership of the individual shares or the commodities for money, and you own this until you sell it again.
CFDs are leveraged products, which means that you only need to deposit a percentage of the full value of the CFD trade in order to open a position. But with traditional trading, you buy the assets for the full amount. In the UK, there is no stamp duty on CFD trading, but there is when you buy stocks, for example.
CFDs attract overnight costs to hold the trades (unless you use 1-1 leverage), which makes them more suited to short-term trading opportunities. Stocks and commodities are more normally bought and held for longer. You might also pay a broker commission or fees when buying and selling assets direct and you’d need somewhere to store them safely.
Capital Com is an execution-only service provider. The material provided on this website is for information purposes only and should not be understood as an investment advice. Any opinion that may be provided on this page does not constitute a recommendation by Capital Com or its agents. We do not make any representations or warranty on the accuracy or completeness of the information that is provided on this page. If you rely on the information on this page then you do so entirely on your own risk.