The Meta Platforms (FB) stock performance has been bearish so far this year. Losses have almost doubled those of the tech-heavy Nasdaq 100 (US100) Index as confidence in the company’s ability to keep growing after its drastic pivot toward the metaverse is not at its highest point.

Meta Platforms, formerly known as Facebook, has cited multiple headwinds that could negatively affect the business’s financial performance in the near term, including changes in Apple’s iOS privacy features and increased competition from other platforms such as TikTok and Snap.

Meanwhile, macroeconomic conditions in the United States have worsened amid a high inflation rate of 8.3% that has prompted a risk-off attitude among market participants.

Finally, FB stock slightly declined on 1 June after the company announced that COO Sheryl Sandberg is stepping down after nearly 14 years at the helm. Javier Olivan, the company’s Chief Growth Officer, will take the lead, although Sandberg’s functions will be spread across the organisational structure as part of a new scheme Zuckerberg has devised to run the business more effectively.

“I think Meta has reached the point where it makes sense for our product and business groups to be more closely integrated, rather than having all the business and operations functions organized separately from our products,” said Meta Platform’s CEO Mark Mark Zuckerberg.

What could be expected from this social media stock considering the current environment and the management’s plans to reshape its business model?

In this article, we analyse the latest Meta Platforms stock news along with its price action and fundamentals to outline plausible FB stock projections for 2022, and possibly beyond.

Meta Platform’s downtrend started back in September 2021 when the pandemic tailwind that had lifted the business’s performance faded on the back of mass vaccinations.

The decline accelerated in November and peaked in February this year after the management made downbeat comments about the company’s future growth and Meta Platforms reported a slight decline in Facebook’s daily active users (DAU) in Q4 2021. This was the first time that such a deceleration had occurred for many years.

Shares fell more than 26% on the day that the report was released. The price has not managed to recover.

On 31 May, Meta Platform announced that it is changing its ticker symbol to ‘META’. It will replace the current ticker ‘FB’ used since the company’s initial public offering (IPO) in 2012. According to the company: “The new ticker symbol aligns with the company's rebranding from Facebook to Meta.”

Meanwhile, as of 8 June, the price action has remained on a downtrend and there were no signs that the stock is ready to change course anytime soon. Since the year started, the FB stock value has dropped 42.3% compared to the 22.8% the Nasdaq 100 index has shed during that same period.

Meanwhile, the stock has been trading nearly 50% below its 52-week high and 31% below its 200-day simple moving average. FB technical analysis indicated that momentum remained unfavourable. The Relative Strength Index (RSI) has been standing at 48 (bearish) and has not moved to overbought levels in months. This typically means that buying interest is fairly subdued. The Moving Average Convergence Divergence (MACD) has remained in the negative territory. 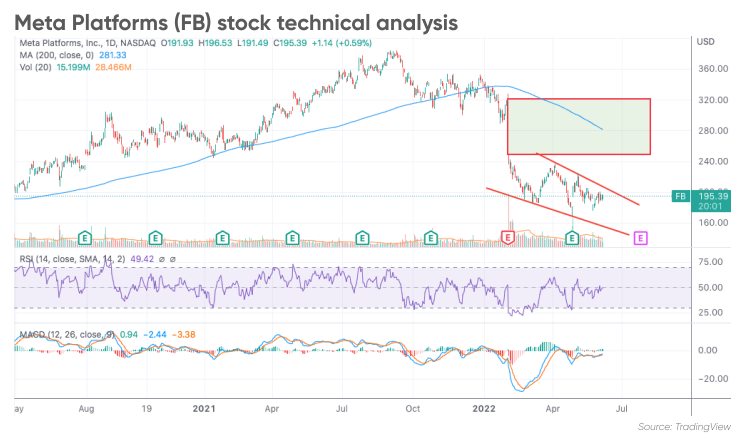 On April 27, Meta Platforms reported its financial results covering the first quarter of the 2022 fiscal year. During the three months ended 31 March, the company reported total revenues of $27.90bn, resulting in a 7% year-on-year jump. Of that total, $695m came from the Reality Labs unit, the company’s metaverse-focused business segment.

In regards to its operating metrics, daily active people (DAP) from Meta’s Family of Apps increased 6% compared to the same period a year ago at 2.87bn. Meanwhile, Facebook’s daily active users (DAU) and monthly active users (MAU) experienced a 4% and 3% year-on-year increase, respectively.

Income from operations stood at $8.52bn, resulting in a sizable decline compared to the $11.38bn the company reported a year ago amid higher operating losses from the Reality Labs unit. As a result, Meta’s operating margin fell to 31%.

By the end of this period, Facebook had no long-term debt, while its liquid reserves – composed of cash, equivalents, and marketable securities – stood at $43.89bn. In addition, the company produced free cash flows of $8.52bn, resulting in a 9% jump compared to Q1 2021. 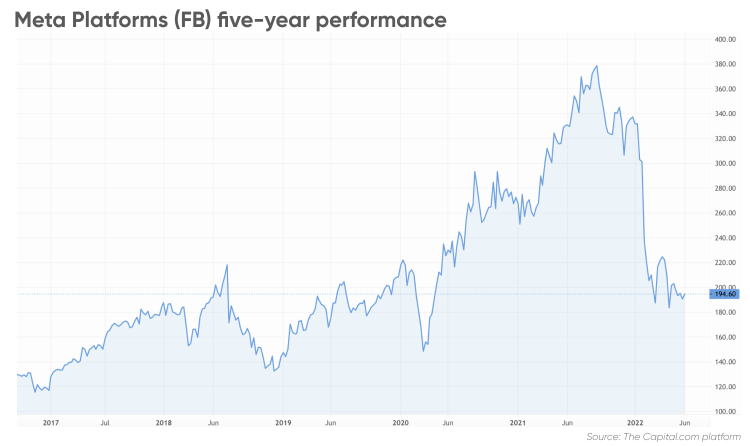 What is your sentiment on META?

Give META a try

What’s next for the FB projected stock price? Read on to learn the latest FB stock outlook.

The consensus recommendation from analysts surveyed by MarketBeat, as of 8 June, was bullish. Of 44 financial services companies rating the stock, 32 gave it a ‘buy’, one a ‘strong buy’ rating, 10 ‘hold’ and one ‘sell’.

The analysts set an average FB stock price target at $307.3 a share, resulting in a 57% potential upside from its 7 June’s closing price of $195.65. The highest 12-month Meta Platforms share price forecast from analysts was $466 and the lowest $220.

Since April this year, most analysts have lowered their price targets for the firm. One notable contrarian opinion came from Citigroup, which upgraded Meta Platforms from ‘neutral’ to ‘buy’ on 20 April.

This upgrade came only days after the American bank issued the report Metaverse and Money: Decrypting the Future, in which it discussed the potential of this up-and-coming industry.

According to Citi, the total addressable market for the Metaverse could be $8trn-$13trn by 2030, while the number of users could rise to 5 billion, or 65% of the global population.

Meanwhile, according Ali Mogharabi, senior equity analyst at Morningstar, the resignation of Meta’s long-tenured COO should not affect the company’s prospects as she “surrounded herself with talented colleagues over the years”.

“For this reason along with the firm’s network effect moat source that continues to attract advertisers to its various platforms, this announcement does not change our $384 fair value estimate of Meta or our exemplary rating of the firm’s capital allocation.
“We view the departure of Sandberg as another indication of Zuckerberg and the firm’s focus on metaverse. However, we do not believe Meta’s leadership team will lose sight of just how successful its advertising business has been and can still be going forward. We think for this reason, Zuckerberg stressed that the firm will try to integrate its various business and product groups, which we believe will allow the firm to more efficiently and quickly cross-sell to advertisers and users, possibly accelerating adoption of its metaverse platform, Horizon, by both,” said Mogharabi. 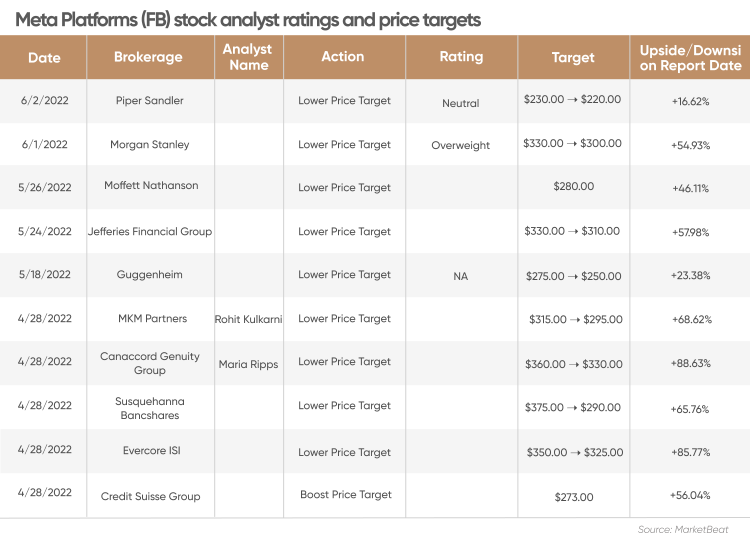 Although the service did not provide price targets for 2030, its five-year Meta stock forecast expected it to reach $389.775 in June 2027.

These predictions have been drafted by algorithms based on an analysis of Meta Platforms’ historical stock price performance. There are no guarantees that the price of FB stock will reach those levels. Your own due diligence should be performed before trading Meta Platforms stock.

Note that algorithm-based predictions can be wrong. Past performance is no guarantee of future returns. Always conduct your own analysis before trading. And never trade money that you cannot afford to lose.