Prices for steel-making iron ore have rebounded in the first half of 2022 after slumping around 27% in 2021, mainly due to China’s move to restrict steel output.

Tight supply, partly caused by the ongoing war between Russia and Ukraine and expectations that China will step up infrastructure spending to boost its economy, have supported iron prices so far this year.

As of 14 June, the price of import-grade iron ore with 62% iron content (62% Fe Fines) to China’s Tianjin port at the Chicago Mercantile Exchange (CME) has gained around 33% in the past six months. Iron ore futures at the Singapore Exchange have risen more than 12% this year.

There are also concerns about a slowing global economic growth as several central banks have been hiking rates to combat inflation.

Will iron ore prices keep the momentum and continue to rebound? Here we take a look at the recent iron ore price movement, supply and demand conditions that shape the prices, and the latest iron ore price forecast for 2022 and beyond.

Just like other commodities, iron ore was not spared the impact of Russia’s invasion of Ukraine. The ongoing war has hampered iron ore shipments from the country.

The country has the capacity to produce around 75 million tonnes (mt), with a large proportion feeding its domestic steel mills. It exported 44mt in 2021, of which 45% went to Europe.

“Ukraine’s output is only a fraction of the volumes exported by Australia (884mt in 2021), but it is enough to make an impact on a market with relatively low spare capacity. The war in Ukraine has squeezed this supply,”
by said ANZ Research’s senior commodity strategist Daniel Hynes and commodity strategist Soni Kumari in the note.

According to data from Australia’s industry ministry, Russia and Ukraine exported a combined 70mt of iron ore in 2021 or equivalent to around one month of Australia’s exports. They shipped the iron ore mostly to China, the European Union and Asia.

Supply from India is also facing constraints after the Indian government raised export tax on iron ore and concentrates to 50% from 30% to fight inflation. The government also imposed a 45% export tax on iron pellets, New Indian Express reported on 21 May. The taxes were effective the following day.

“The news saw exporters rush to beat the increased tariffs, with exports soaring in the weeks up to the implementation. However, we expect a sharp fall in exports in June as the higher tariffs significantly reduce the profitability for exporters,”
by Hynes and Kumari said in the note.

Australia is forecast to export 919mt in 2022, an over 5% increase year-over-year as new mine supply comes from major Australian producers, according to Australia’s industry ministry. In 2021, the country shipped 872mt of iron ore, a 0.6% increase from 2020.

“Australian producers have continued to be impacted by labour supply shortages in recent months,” the ministry said in the Resources and Energy Quarterly March 2022 report.

“This includes issues at existing operations, as well as the tie-in of replacement capacity. With an ongoing rebound in China’s steel output so far in 2022, these labour shortages raise the risk of global supply shortfalls in the near term.”

“As major miners are focusing on value over volume in FY2022, with announced production targets still being subject to multiple risks,  we expect global iron ore supply to remain constrained this year. Increases in capex are largely following inflation and not driving significant increases in output or shipments,” Fitch Solutions wrote in the note published on 31 May.

Some of the risks on production include mining disruptions and cyclones in Western Australia that may affect transport operations. The firm also expected Brazilian miner Vale SA to struggle to recover its production to the levels prior to the dam collapse at its mine in Brumadinho in January 2019.

Australia’s industry ministry also said that China’s expansionary fiscal and monetary policy this year after a relatively tight stance during 2021 is expected to bolster steel and iron ore demand in 2022.

In January, the Chinese government announced it will front-load infrastructure investment and push forward the 102 mega projects earmarked for the 14th Five-Year Plan period that runs from 2021 to 2025. The mega projects include roads, railways, public transit systems, airports, nuclear power plants, power transmission lines and pipelines.

“We think that China's infrastructure stimulus still has legs thanks to abundant funding, a strong project pipeline, accelerated project construction at local levels. We expect infrastructure investment to boost demand for construction steel, aluminium and cement over the next 3 to 6 months” CreditSights’ analysts wrote in a note on 20 May.

According to ANZ Research, the property sector accounts for roughly 40% of China's steel and iron ore demand. Construction accounts for more than half of global steel demand.

Fitch Solutions is also more positive towards Chinese demand for iron ore, primarily due China’s push on fiscal and monetary stimulus to support its economy.

In addition, the firm said iron ore consumption from China’s steel sector is expected to pick up strongly in 2022 after power shortages in the second half of 2021 curbed steel manufacturing activities.

The prices of iron ore 62% Fe hit a record high of $219.77/tonne in July 2022. Producers struggled to increase output amid a rebound in demand as economies started to reopen amid easing Covid-19 restrictions.

However, prices gave up their gains in the second half after China announced that it had curbed steel production to combat air pollution and lower emission ahead of the Beijing Winter Olympics in February this year. 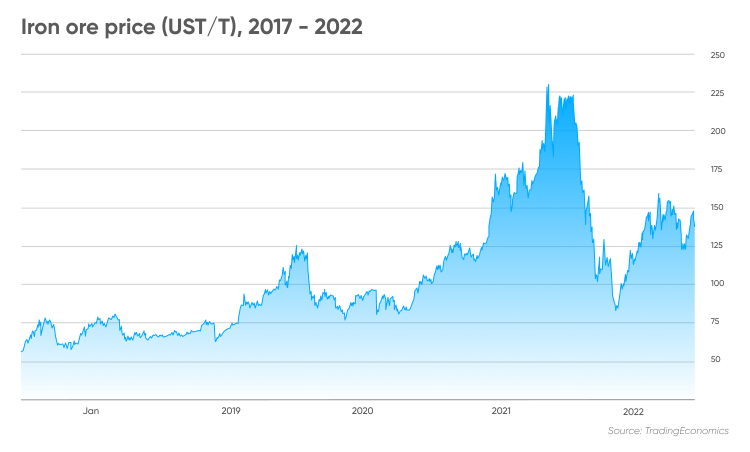 The country’s steel production was further constrained following power shortages which led to blackouts. A debt crisis faced by Chinese real estate firms, which began with problems for Evergrande, heightened concerns over demand from the country’s property sector and pressured iron ore prices.

On the production side, China’s steel output dropped 3% to 1,032.8mt in 2021 year-over-year, according to data from the World Steel Association.

The prices continued their advance going into 2022 after China announced the plan to boost infrastructure spending.

On 7 March, iron ore prices at the Singapore Exchange crossed above $160 on expectations that China may ease its stringent ‘zero Covid-19’ policy, leading to a recovery in steel demand. But prices have softened since then because China is set to reimpose Covid-19 restrictions amid rising cases.

“We expect prices to trend lower in Q4 and into 2023 as the impact of the stimulus measures peter out and iron ore demand ultimately weakens.”
ANZ Research

“We expect prices to trend lower in Q4 and into 2023 as the impact of the stimulus measures peter out and iron ore demand ultimately weakens,” Hynes and Kumari wrote.

“The boost in new infrastructure investment and easier credit conditions in China this year is expected to provide further support to prices for the rest of 2022,” the ministry said in the report.

In the longer term iron prices are forecast to decline, according to Australia’s industry ministry. It predicted benchmark iron ore prices to average $80/tonne in 2023 and continue to drop by 15% a year, reaching $55/tonne in 2027.

“This decline will come as a result of more modest growth in blast-furnace steelmaking (compared with the past decade) from major producers such as the EU, US and China, as the world undergoes a transition to a low emissions environment,” they said in the report.

“This softer demand growth will also take place alongside growing supply from Australia, Brazil and Africa, and is expected to dampen prices over the outlook period to 2027.”

“We maintain our view that iron ore prices will consistently trend downwards, as cooling Chinese steel production growth and higher output from global producers will continue to loosen the market,” the firm said.

Fitch Solutions forecast global iron ore mine output growth to average 2.8% over 2022-2026 compared to the average 0.9% contraction over the previous five years.

The growth would raise annual production by 367.1 million tonnes in 2026 compared to 2022 levels, slightly more than India, Russia and South Africa's combined output in 2022.

Note that iron ore price predictions can be wrong. Forecasts shouldn’t be used as a substitute for your own research. Always conduct your own diligence and remember that your decision to trade or invest should depend on your risk tolerance, expertise in the market, portfolio size and goals.