Fisker shareholders: Who owns the most FSR stock?

Investors in Fisker (FSR), the electric vehicle (EV) start-up, have had a tough year with the stock price falling 57%. However, there have been some recent positive signs.

In mid-November 2022, the manufacturer announced the production of Fisker Ocean, its all-electric SUV, was starting on schedule. The news initially pushed the stock price up almost 9% to $8.65, although it has since given up some of those gains and stood at $7.68 during early trading on 23 November, 2022.

But what does this mean for Fisker shareholders? In this piece we examine the company’s prospects and consider what this means for them.

California-based Fisker aims to develop the most “emotionally desirable and eco-friendly” electric vehicles on earth. It was founded in 2016 by Henrik Fisker and his wife, Dr Geeta Gupta-Fisker. It went public on 30 October 2020, following a merger with Spartan Energy Acquisition Corp, a special purpose acquisition company (SPAC).

The company trades on the New York Stock Exchange (NYSE) under the FSR ticker. Trading opened just below $9-a-share on its debut, with the stock touching $10.66 before closing at $10.14.

Fisker shareholders celebrated the stock hitting its all-time high closing price of $28.50 on 26 February 2021. However, the average FSR price for the last 52 weeks has been less than half that at just $10.89.

The company has delivered -64.73% in trailing returns, according to data compiled by Morningstar. This compares to the -49.54% achieved by the auto manufacturers industry. 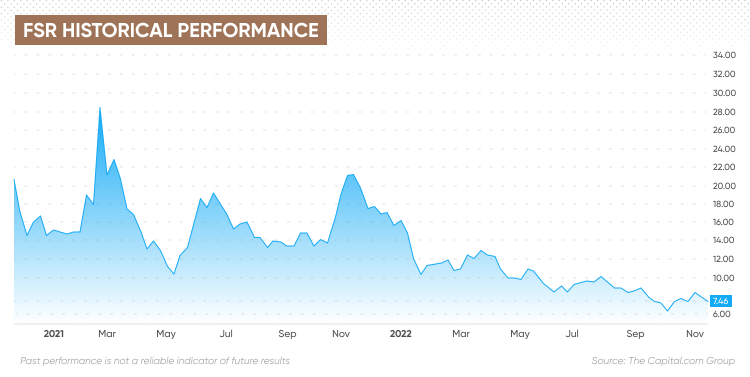 What is your sentiment on FSR?

Give FSR a try

In mid-November 2022, the company announced production had started on the Fisker Ocean all-electric SUV.  It added that more than 63,000 reservations reflected “strong global demand”, with two trim levels sold out in the US market for 2023.

Henrik Fisker said it was “an emotional day” and one for “our team and fans” to celebrate:

“We’ve challenged the old model of longer development timelines, reflecting our team’s agility and dedication to creating emotionally desirable vehicles with the newest, most unique experiences in our price range.

“We have the highest quality at launch, aligned with our commitment to leading the industry in sustainability.”

Losses from operations totalled $140m, including $11.2m of stock-based compensation expense, while net losses were $149.3m. However, the company said it projected operating expenses and capital expenditures for the full year, ending 31 December, to be at the lower end of the $715m to $790m range.

But what does this all mean for Fisker shareholders?

Public companies are owned by a variety of different investors – from global fund management giants to individuals holding just a few shares. However, it’s important to know who owns the most shares of Fisker.

For example, if a particular institution, or individual, has a very large stake, they can wield a significant degree of power. They can get a seat on the board and play an active role in decisions at executive level.

Investors should pay attention to the split between institutions, retail shareholders and insiders to gauge how the company is viewed. A large number of shares held by insiders suggests they are positive about the company’s prospects.

When senior executives are also significant shareholders, it means their interests are closely aligned to them. If they sell a significant stake, this may be a red flag necessitating further analysis.

According to SimplyWallStreet, Fisker is 43.4% owned by individual insiders, 31.4% by institutions, 24.6% by the general public, and 0.6% by private companies.

Let’s take a look at the Fisker major shareholders to find out who are the biggest institutional shareholders, according to data compiled by MarketBeat.

The index tracking asset manager holds 13,752,473 Fisker shares, which makes it the largest institutional investor in the business. The market value of this stock is $103.83m, giving it a 4.4% stake in the EV manufacturer, as of 15 November.

Vanguard is synonymous with index investing. Its founder, the late Jack Bogle, is credited with introducing these products to give people a cheaper way to invest. Its core purpose is to “take a stand for all investors”, treat them fairly and give them the best chance of enjoying investment success.

The global investment house is the second largest institutional investor in Fisker, with a 3.3% stake. BlackRock, which provides services to institutional, intermediary and retail clients, currently (23 November) holds 10,276,634 FSR shares with a market value of $77.59m.

Solutions offered by the global investment house include rigorous fundamental and quantitative active management approaches. It has declared: “We help our clients, and the people they serve, save for retirement, pay for their children’s educations, buy homes and start businesses”.

The New York-based global investment management firm is the third largest institutional shareholder in Fisker. As of 14 November, it held 7,183,630 shares with a market value of $54.24m, giving it a 2.3% ownership stake in the business.

Moore operates as a hedge fund manager and provides portfolio management and advisory services to private investment funds. The firm, which runs several privately offered funds, was founded in 1989 by Louis Moore Bacon, who remains its chairman and principal investment manager.

As far as insiders are concerned, who are the shareholders of Fisker? Here are the three biggest insider shareholders in the company, according to data compiled by Nasdaq.

Roderick K. Randall has served on Fisker’s board since March 2018 and is an executive partner at Siris Capital Group, a private equity firm. He previously had a 10-year span of leadership positions at two venture capital firms, according to a biography published by Fisker.

US Securities and Exchange Commission (SEC) filings from 7 October 2022 put Randall’s shareholdings at 2,213,720.

Henrik Fisker, the co-founder of Fisker with his wife, Dr Geeta Gupta-Fisker, indirectly owns 1,430,318 shares that are held by the Mayfair Trust. According to documents filed with the SEC, the couple are both listed as co-trustees of the Trust.

Henrik Fisker is the CEO of Fisker, while Gupta-Fisker serves as chief operating officer and chief financial officer.

Mitch Zuklie has served on Fisker’s board of directors since March 2021. He is also the CEO of Orrick, a global law firm. Zuklie is an experienced business and legal advisor who has completed hundreds of venture capital financings and numerous public offerings, mergers, acquisitions and licensing transactions.

So, what do analysts think of Fisker? As of 23 November, FSR was rated ‘hold’, based on the views of 12 analysts compiled by MarketBeat. Seven had ‘hold’ recommendations in place and five saw it as a ‘buy’. The consensus price target felt it could rise 92.47% to $14.92. The highest prediction came in at $28, while $8 was the lowest.

According to six analyst ratings compiled by TipRanks, the stock is a ‘moderate buy’, which has a potential upside of 87.09% over the coming year. This would push it up to $14.20. Again, the price target predictions range from $8 to $28.

While it may be useful to know who owns the most shares of Fisker, it shouldn’t be used as a substitute for your own research. Always conduct your own due diligence, looking at the latest stock news, analyst commentary, technical and fundamental analysis. Remember, past performance does not guarantee future returns. And never trade with money you cannot afford to lose.

Softbank shareholders: Who owns the most SFTBY stock?

Alphabet shareholders: Who owns the most GOOGL stock?