EGC’s losses came despite the EverGrow ecosystem seeing both the beta roll-out of its multi-chain non-fungible token (NFT) marketplace, LunaSky, and the launch of a new ecosystem token called LUCRO in recent weeks.

As of 19 October 2022, EverGrow’s EGC token is currently languishing with more than 4,000 cryptocurrencies valued above it in terms of market capitalisation, according to CoinMarketCap data.

Will EGC see a rebound in 2022? Let us read about the EverGrow protocol, its passive income-yielding offerings, price analysis of the EGC coin and the latest EverGrow coin price predictions from analysts.

EverGrow is a BNB Chain-based passive income protocol that rewards holders of its native token EGC with stablecoins.

The project, founded by Praveen Rai and Ajeet Singh, launched on 25 September 2021. According to the EverGrow website, investor Sam Kelly joined the team and was appointed chairman of its board. EverGrow’s updated roadmap was published at the end of 2021.

On 8 August 2022, Evergrow announced that Singh had stepped down as lead developer of EverGrow by mutual consent. EverGrow added that Singh will remain on its team as technical consultant.

According to the project’s whitepaper, 8% of every transaction fee is redistributed to EGC holders, and 2% transferred to an EGC liquidity pool on Binance-based DEX Pancake Swap. An additional 4% of transaction fees is shared equally between buyback programmes and project development.

In order to generate additional sources of income with which to reward EGC holders, EverGrow is developing an NFT marketplace called LunaSky, a social media platform called Crator, a crypto wallet, a DEX and a metaverse ecosystem.

EverGrow’s whitepaper also stated that the protocol had an “anti-whale system” that limits any sale amount to a maximum of 0.125% of EGC’s circulating supply.

EverGrow conducted a public sale of its new ecosystem token called LUCRO token on 10 September 2022. According to EverGrow, LUCRO will be used across its various applications.

Each LUCRO transaction will incur a nominal 1% tax, of which 0.8% will be used for EverGrow’s buyback and burn programme and 0.2% will be sent to LUCRO’s liquidity pool.

What is EverGrow? Tokenomics of EGC

The EverGrow token (EGC) is the native yield-generating cryptocurrency of the EverGrow protocol. According to CoinMarketCap, as of 19 October 2022 EGC was the 4,302nd-largest cryptocurrency, with a fully-diluted market cap of just under $93m.

The main draw of EGC is its passive income-earning ability – 8% of all transaction fees on the EverGrow protocol is rewarded to holders.

According to EverGrow’s website, rewards are calculated by the amount of EGC held and the token’s daily volume. BUSD is distributed only when certain volume thresholds are triggered – a low transaction volume may result in longer threshold trigger times.

EGC had an initial maximum supply of one quadrillion tokens. According to EverGrow’s whitepaper, the token has a buyback and burn feature and over 50% of EGC has been sent to a burn address.

EverGrow’s buyback reserve accumulates Binance Coin (BNB), which is used to buy back EGC from the open market and send them to a burn address. As mentioned earlier, 2% of transaction fees on EverGrow is allocated for its buyback reserve.

CoinMarketCap could not verify the circulating supply of EGC on 19 October 2022. 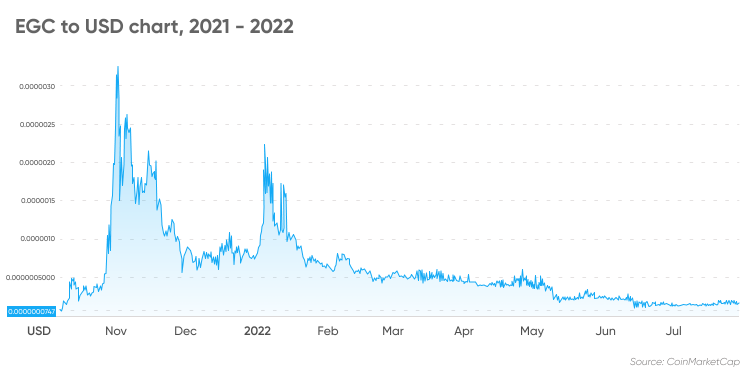 Interest in EGC peaked a few weeks after its launch, as EGC token transfers began to increase. BscScan data showed EGC token transfers surged in the last week of October 2021 and peaked at over 70,000 transfer counts on 1 November 2021, the same day that EGC hit an all-time high of $0.000003379.

Since then, the number of token transfers on EverGrow protocol has declined and the price of EGC has mirrored this downfall. In 2022, EGC has lost about 89.6% year-to-date, as of 19 October 2022.

More recently, EGC has endured a difficult end to the third quarter of the year. EGC’s losses over the last 90 days, as of 19 October 2022, amounted to about 50%. The launch of EverGrow’s new LUCRO token and NFT marketplace has done little to help recoup EGC’s losses.

EGC and LUCRO have suffered a similar fate of bearish price action that most cryptocurrencies have seen in 2022 due to risk-off investor sentiment.

On 26 September 2022, EverGrow announced the beta launch of its multi-chain LunaSky NFT Marketplace. According to EverGrow’s roadmap, LunaSky will be its ecosystem’s first utility platform.

LunaSky is designed to collect a 2% fee on all sales transacted on the platform. EverGrow said the fees collected will used to buy back EGC tokens from the market and burn them in order to support EGC’s price.

EverGrow marked the launch of LunaSky with the release of EverGrowMan NFTs, described as a collection of 15,000 superhero NFTs which give their owners the chance to win Tesla Model 3 cars, 50,000 BUSD and future LUCRO airdrops.

Over 30 trillion EGC have been burned since launch day, and in total 53% of all $EGC have been permanently obliterated! We have been regularly burning coins since launch, & this is without our EGC burning utilities being live yet. So much more to come! ????????????

EverGrow coin price prediction: 2022 and beyond

For the longer term, algorithm-based forecasting service Wallet Investor was bullish in its EverGrow price prediction for 2022, expecting the EGC token to trade at an average of $1.122 by the end of 2022.

Wallet Investor’s EverGrow price prediction for 2025, however, expected the token to reverse its gains and fall to an average price of $0.000000006 by the end of that year.

Note that algorithm-based EverGrow coin price predictions can be wrong, and that forecasts shouldn’t be used as a substitute for your own research.

Always conduct your own due diligence and remember that your decision to trade or invest should depend on your risk tolerance, expertise in the market, portfolio size and investment goals.

Crypto crash: Will crypto recover from Terra and 3AC collapse?