The cronos (CRO) coin, the native cryptocurrency of the Cronos crypto exchange and blockchain, took a hit after it was revealed that it had accidentally transferred ether (ETH) worth around $400m to the wrong crypto account.

The news came right after the collapse of the FTX (FTT) crypto exchange, and the price of CRO crashed almost 30% in hours, sinking to a low of $0.0563 on the morning of 14 November. By comparison, it had traded at a little over $0.08 the previous day.

The mishap, which saw Cronos accidentally send around 80% of its ETH reserves to a wallet held by the rival crypto exchange Gate.io, took place on 21 October, according to records from Etherscan.

The exchange’s CEO, Kris Marszalek, tweeted: “It was supposed to be a move to a new cold storage address, but was sent to a whitelisted external exchange address.”

After the collapse of the FTX exchange, the Cronos site published its holdings. On 11 November it appeared to have assets of more than $2bn but, by 16 November 2022, that figure was down to a little over $600m, before rising back to $3.3bn as of 1 December. Either way, it is important to note that the platform had no debts.

So, what is cronos (CRO)? Let’s take a closer look, and also examine some CRO coin price predictions that were being made as of 1 December 2022.

The cronos coin is the native cryptocurrency of both the Crypto.com blockchain and the Cronos EVM chain, which run parallel to one another.

The Cronos EVM chain claims to be the first Ethereum-compatible blockchain built using the Cosmos software development kit. It is open-source, meaning that anyone can use it,  and it’s permissionless, meaning that two different users can carry out a transaction without having to get the permission of a central authority figure on the network. The aim is to let developers move applications from other blockchains instantly, allowing them to benefit from low transaction fees.

Crypto.com, which is based in Hong Kong, operates as a platform and app where users can buy, sell and earn digital assets. It was founded in 2016 by Marszalek, a Polish-born entrepreneur, together with Bobby Bao, Gary Or and Rafael Melo, and has since acquired more than 50 million users.

The platform offers a non-fungible token (NFT) marketplace, as well a Visa card that allows people to gain 8% cashback and can be used in around 40 countries. It has a crypto wallet, a token-swap facility, the possibility of earning daily rewards and interest, and the ability to monetise crypto assets without having to sell them.

According to the Crypto.com whitepaper, the Cronos ecosystem “represents the next major phase in the adoption and utilisation of Web 3.0 by hundreds of millions of users”.

Apart from powering the system, cronos is also used for staking, which rewards users with perks such as free Netflix and Spotify subscriptions, a number of cashback fee rewards, better interest rates, higher yearly percentages on the Crypto.com exchange, an additional 2% a year on fixed-term deposits, and numerous other rewards.

By staking CRO, users can become liquidity providers. The cronos cryptocurrency is also used to settle transaction fees on the Crypto.com chain.

Let’s now take a look at the CRO price history. While past performance should never be taken as an indicator of future results, knowing what the coin has done in the past can help give us some important context if we want either to examine a cronos price prediction or make one of our own. 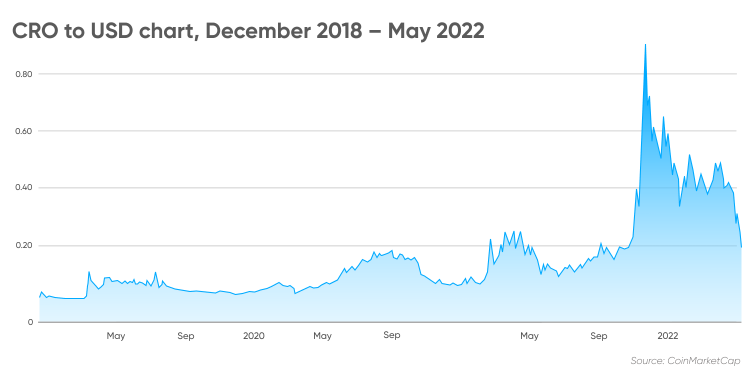 Crypto.com did not shy away from boasting of its fast-achieved popularity and great successes, becoming the first global crypto exchange to launch its own NFT platform, gaining the endorsement of Academy Award-winning actor and writer Matt Damon for its global brand campaign.

But 2022 has been a poor year for CRO. It fell down initially, before managing to briefly top $0.50 on 9 February. However, positive sentiment surrounding its value did not last long despite it rebranding from crypto.com to cronos, in an attempt to reflect “the decentralisation of the coin and tremendous growth of Cronos ecosystem”.

The price of CRO started to decline once Crypto.com decided to slash some of its staking rewards, as well as ending some prominent partnerships.

By 12 May 2022, with the market in turmoil after the depegging of the UST stablecoin and the collapse of the associated LUNA cryptocurrency, CRO was down to $0.1694. Things got even worse the following month, when the cancellation of withdrawals on the Celsius (CEL) crypto lending platform confirmed the bear market, and cronos sank to $0.09902 on 18 June.

In other CRO news, the platform announced on 25 July 2022 that it had launched a Google Pay in-app feature “allowing users to purchase crypto quickly and securely”.

A few days earlier, on 23 July 2022, the platform also announced a series of updates to its Crypto.com Visa cards.

At that time, there were 25.26 billion CRO in circulation out of a total supply of just over 30.26 billion. This gave the coin a market cap of about $1.65bn, making it the 29th-largest crypto by that metric.

Let us now take a look at some of the cronos price predictions that were being made as of 1 December 2022.

Keep in mind that price forecasts, especially for something as potentially volatile as cryptocurrency, are often wrong. Long-term crypto price predictions are often made using an algorithm, which means that they can change at any time.

CoinCodex made a short-term cronos crypto price prediction that said the coin could rise slightly to trade at about $0.067981 by 6 December with it then potentially dropping to $0.041197 on 31 December. The site’s technical analysis was bearish, with 19 indicators making negative signals against 12 making bullish ones.

Finally, Wallet Investor struck a far more bearish note in its CRO price prediction, suggesting that the crypto could face a torrid time over the next year and drop to a mere $0.00942 by December 2023.

When considering a CRO coin price prediction, it is important to keep in mind that cryptocurrency markets remain extremely volatile, making it difficult to accurately predict what a coin or token’s price will be in a few hours, and even harder to give long-term estimates. Analysts and algorithm-based forecasters can and do get their predictions wrong.

If you are considering investing in cryptocurrency coins or tokens, we recommend that you always do your own research. Look at the latest market trends, news, technical and fundamental analysis, and expert opinion before making any investment decision. Keep in mind that past performance is no guarantee of future returns. Never trade with money that you cannot afford to lose.

How many dogecoins are there? Everything you need to know