Blockchain network Bitgert and its native BRISE token have enjoyed a breakout year in 2022.

The cryptocurrency has gained about 56% year-to-date, as of 6 June 2022, on the back of the launch of Bitgert’s blockchain mainnet in February 2022.

Furthermore, BRISE’s listing on various cryptocurrency exchanges, including KuCoin and Crypto.com, has helped the token post gains in a bearish cryptocurrency environment. However, data shows a large token concentration held by whale addresses.

In this article, you will learn about features of the Bitgert network, recent BRISE price action, the latest news, potential red flags of the project and the outlook for 2022 and beyond.

Bitgert initially launched on the Binance Smart Chain (BSC) and used the binance coin (BNB) to pay out its rewards. According to Bitgert’s roadmap, the project first launched in July 2021 with a website release and listing of its native BRISE token on Binance’s DEX, Pancake Swap.

The project was initially known as ‘Bitrise’ before rebranding to ‘Bitgert’ in December 2021. In February 2022, Bitgert launched its native BRISE Chain, supported by the BRC20 smart contract, in what was the biggest development on the blockchain project so far. The launch of its native blockchain network has enabled developers to build dApps on the Bitgert network.

According to Bitgert, the BRISE Chain relies on a system of proof of authority (PoA) to support short block times and low fees. The BRISE chain has smart contract functionality and compatibility with the Ethereum Virtual Machine (EVM). Developers can issue new tokens, run full nodes to gain access to live updates on transactions, blocks, and consensus activities, and develop wallets and tools for Dapps on the BRISE chain.

The launch of the network’s incubation program, Bitgert Startup Studio, has played a big role in the numerous projects that have emerged on the BRISE chain.

Bitgert Startup Studio helps developers and entrepreneurs issue cryptocurrencies for their projects, allowing them to raise funds via private or public token sales. The program also provides marketing and technical support to launch projects on the BRISE chain.

“The Studio is the centre of the BRISE ecosystem. Its churning out the projects which ranges from DeFi to Sustainability to Gaming to Metaverse to You-name-it-they-have-it,” said OmniaVerse, a leading protocol on the BRISE Chain.

A number of projects hosted on the BRISE chain are still in their nascent phase. Waferrise, a passive income DeFi platform, expects its product release in the third quarter of 2022. OpenVault, an NFT staking platform, is projected to launch later in the year.

BRISE is the native token of the Bitgert network. It initially launched as a BEP-20 token on the Binance network. After the launch of the BRISE Chain, the coin was converted to its native BRISE chain token.

Users staking their BRISE will receive staking rewards in BUSD, according to Bitgert’s website. The BRISE coin is also used as a peer-to-peer payment method within the BRISE dApp Wallet, which has zero transaction fees. It allows both seller and buyer to transact crypto fees directly with each other without the need of a third party.

Additionally, the platform has added a buyback concept to cryptocurrency, making the BRISE coin a “token more attractive to hold”. The buyback policy gives investors more confidence to purchase and hold on to the coin, which consecutively aims to grow its demand and increase its price.

Each transaction collects 5% in buyback tax, which is stored within the contract. If a sale occurs, part of the paid buyback tax is used to purchase tokens from the liquidity pool, which are immediately burned following the buy.

BRISE’s maximum supply is capped at one quadrillion tokens, according to CoinMarketCap. As of 6 June 2022, the circulating supply of BRISE tokens stands at over 427 trillion.

According to BNB chain-based analytics platform BscScan, over 527 trillion BRISE tokens, representing more than 57% of total token supply, are currently in a “null address”, which is typically used by blockchain networks to store ‘burnt’ tokens.

BscScan data showed BRISE tokens in the null address had increased from about 5 trillion tokens in early-July 2021 to about 5.73 trillion by late-May 2022.

The website's data also showed the second highest concentration of BRISE tokens held about 8.2% of total BRISE supply, while 8 other addresses held close to 14% of the total BRISE token supply, as of 6 June.

According to CoinCarp, the top 20 BRISE holders held over 90% of the token’s total supply, as of 6 June, and the total number of BRISE-holding addresses was 150,550, up about 7.5% from a month ago.

Bitgert news that affected its price performance in 2022 includes:

In early April, Bitgert announced the network would work on Web3 geo datamaps to provide dApps with crowdsourced maps and decentralised location services and on Web3 oracles to connect offchain data to blockchains in real time. Bitgert will also build decentralised marketplaces and a payment app called PayBrise to accept payments in BRISE. 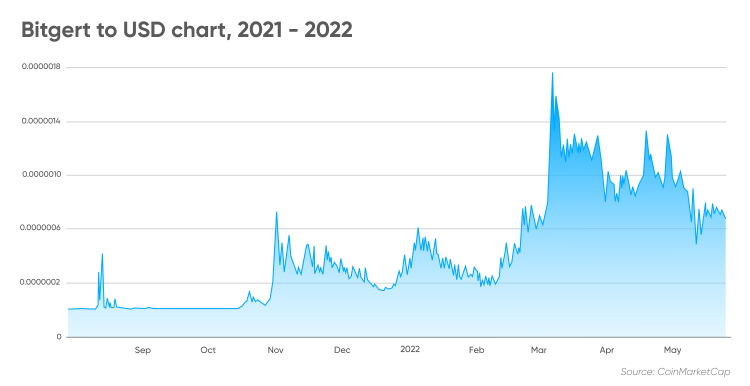 More recently, the price has fallen along with the broader cryptocurrency market, slipping over 31% in the last 30 days. However, the recent fall has not kept BRISE from posting positive returns in 2022. At the time of writing (6 June), the token was up more than 140% in the past 6 months.

In terms of short-term technical analysis, BRISE was trading below its five and 10-day moving averages, indicating a downward trend. BRISE’s relative strength index (RSI) was at 44.48, as of 25 May, signalling that the token was neither oversold or overbought.

When looking for bitgert crypto price predictions, traders should remember that the cryptocurrency markets are extremely volatile. Algorithm-based forecasts and predictions are based on analysis of past performance, which is never a guarantee of future returns.

Always conduct your own research and remember that your decision to trade or invest should depend on your risk tolerance, expertise in the market, portfolio size and goals. Never invest or trade money you cannot afford to lose.

Tezos price prediction: Can it rebound to previous highs?