The price for the BitDAO cryptocurrency has retreated in recent days after soaring in the past month amid news of a contribution to its treasury and a fund to accelerate third-generation Internet (Web3) adoption in Africa.

Decentralised autonomous organisations (DAOs) have grown in popularity as blockchain and cryptocurrency developers push to apply the full benefits of the decentralised nature of blockchain networks and smart contracts in managing community-based projects.

How does BitDAO work and what is a realistic BitDAO price prediction? In this article we look at the project’s recent developments and the latest price forecasts to help you decide whether to consider it as an investment.

BitDAO launched in August 2021raised $230m in June 2021 from a private sale led by Peter Thiel, Founders Fund, Pantera Capital and Dragonfly Capital among others.

The DAO is a collective of contributors who hold its BIT tokens. As a DAO, it has no founders or centralised development team. Instead, any individuals, development teams and research labs can submit proposals for the direction of the project, upgrades to the protocol, token swaps or partnerships, and token holders vote on whether to implement them.

BitDAO claims to be “one of the world's newest and largest decentralized autonomous organizations, formed with the vision of leveling the economic playing field for every person in the world through the acceleration of the decentralized tokenized economy.”

Cryptocurrency exchange Bybit pledged to contribute 2.5bps of its futures contracts trading volume to the BitDAO treasury, which was equivalent to $1b annually in 2021. The treasury “can be used to provide liquidity to partners, and bootstrap new protocols such as decentralized exchanges (DEX), lending and synthetics protocols.”

Rather than developing a single blockchain, BitDAO “aims to support blockchain technologies through grants (à la Gitcoin), and support existing and emerging projects through token swaps,” according to its launch announcement.

“BitDAO’s vision is open finance and a decentralized tokenized economy… With no signup process, no middlemen approvals, no middleman execution, DeFi will fundamentally disrupt traditional finance and is likely to become a trillion dollar sector.”

The third-generation Internet, known as Web3, is centred on decentralised, peer-to-peer networks that enable users to take control of their data and provide them with enhanced privacy.

“Web3 is a collective pursuit. And BitDAO is leveraging its billions in assets to grow an ecosystem of Autonomous Entities (AEs) with a shared vision for the future,” according to the BitDAO website. “These organizations are purpose-built to drive the development of Web3 tools and technologies across industries including arts, education, media, finance, gaming, and technology.”

BitDAO has allocated over $638m across Autonomous Entities (AEs) and labs. It held more than $1.63b in its treasury, as of 18 August.

The BIT price climbed as the token followed the cryptocurrency markets higher in November – a rally led by Web3 and metaverse-focused coins and tokens. BIT reached its highest price to date of $3.09 on 12 November.

But, as cryptocurrency markets retreated and turned bearish, the BIT price fell to $1.71 in mid-December. After a brief uptick in January above $2, the price has been in decline for most of 2022, reaching $0.4049 on 18 June. BIT has risen from the lows as crypto markets have attempted to move higher. 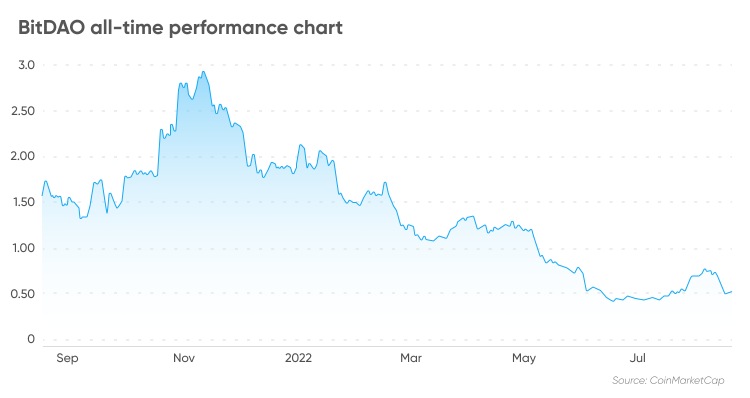 On 20 July, Bybit said it had made an $89m contribution in ether (ETH), tether (USDT), USD Coin (USDC) and BIT to the BitDAO treasury for June.

On 21 July, BitDAO hosted a discussion on a proposal to launch a Layer 1 blockchain with BIT as its native cryptocurrency. The blockchain would be optimised for Ethereum Virtual Machine (EVM) decentralised apps (dApps) such as derivatives decentralised exchanges (DEXs) and gaming, as well as DAO operations, participation, tokenomics and chain bridging.

Bybit is proud to support https://t.co/KRPTmhyQOM. We have made an ~$89M contribution (in $ETH, $USDT, $USDC, and $BIT) to the @BitDAO_Official treasury for June 1 through June 30.

On 10 August, BitDAO announced that “AfricaDAO's proposal to accelerate Web3 adoption across Africa has been approved to receive $20M in funding”.

According to the proposal:

“Africa is poised to be disrupted by web3 because it’s the fastest growing and youngest population continent on the planet with great smartphone penetration (~50%), 4G internet user-base growth, (going from 150M in 2022 to 300M by 2025) and increasing crypto adoption due to hyperinflation, instability, and high unemployment… In order to scale globally, BitDAO will need to engage millions of users around the world. By positioning itself to support one of the largest, fastest growing, and most promising markets, BitDAO stands to benefit immensely.”

What could the price move mean for the token’s future value? Let’s look at the BIT price prediction outlook.

BitDAO price prediction: is the coin a buy or sell after recent moves?

The short-term outlook for the BitDAO price was bearish, according to data compiled by CoinCodex, with 24 technical analysis indicators showing bearish signals compared with four bullish signals, as of 18 August.

The price has fallen below the 50-day simple moving average, which switched to a sell signal on 16 August.

The BitDAO crypto price prediction from GovCapital raised questions about the token’s future, projecting that the price could drop to zero in September.

If you are looking for a BitDAO price prediction to decide whether to invest in the token, it’s important to keep in mind that cryptocurrency markets remain extremely volatile, making it difficult to accurately predict what a coin’s price will be in a few hours, and even harder to give long-term estimates. As such, analysts and algorithm-based forecasters can and do get their predictions wrong.

If you are considering investing in cryptocurrency tokens, we recommend that you always do your own research. Look at the latest market trends, news, technical and fundamental analysis, and expert opinion before making any investment decision. Keep in mind that past performance is no guarantee of future returns. And never invest money that you cannot afford to lose.

Dogecoin price prediction: Is now the time to buy into the meme coin?

Steem price prediction: What is steem?