By Peter Henn and Ankish Jain

It is an offshoot of the world’s largest crypto, but what is bitcoin gold (BTG)? Let’s take a look and see what we can find out, as well as examining some of the bitcoin gold price predictions that were being made on 26 September 2022.

What is Bitcoin Gold?

Bitcoin Gold is a community-led cryptocurrency initiative built on a hard fork of bitcoin (BTC).

Bitcoin Gold was created as an open-source protocol with a purpose to decentralise mining of the cryptocurrency back to regular computers, as bitcoin mining became increasingly centralised among large miners with costly processing equipment.

The vision of “One CPU, one vote” formed by the pseudonymous Bitcoin founder Satoshi Nakamoto was exploited by the manufacturers and distributors of mining equipment monopolised by a small number of entities.

In July 2017, Jack Liao, CEO of LightingAsic and BitExchange, said he was researching a Bitcoin hard fork to switch from Nakamoto’s original SHA256 algorithm to Equihash. Satoshi’s notion of “One CPU, one vote” was substituted in Bitcoin Gold with "One ASIC, one vote”.

Bitcoin Gold enabled many people to participate in the mining process by using widely accessible equipment made and sold by well-known mainstream firms. The algorithm aims to address the scalability issues that can affect the Bitcoin blockchain.

Bitcoin Gold is powered by BTGPay, a marketplace that connects users, merchants and e-commerce businesses that accept BTG, the network’s native token.

Over time, the developers have shifted their focus for how the Bitcoin Gold blockchain will develop, noting:

“At inception, Bitcoin Gold was focused on providing a cryptocurrency in the Bitcoin model, but which was more decentralised for miners. Today, our focus is on making BTG a more trustless and useful cryptocurrency for everyone, and that change in focus is evident in our current development roadmap.”

The roadmap for 2021 focused on four areas: interoperability with other blockchains; shifting from board-based governance to a decentralised autonomous organisation (DAO) model; infrastructure updates; and establishing a robust and effective lightning network to run on the blockchain.

A lightning network is a second-layer technology applied to bitcoin that uses micropayment channels to scale its blockchain’s capability, essentially allowing participants to transfer bitcoins between one another without any fees using their digital wallets.

One thing worth mentioning at this stage is that the system’s blog has not been updated since 18 May 2021 and there have been no fresh posts on its Twitter feed since 15 July last year.

As a step in the development of interoperability, in May 2021, Bitcoin Gold announced a partnership with Phala Network to create low-cost, trustless cross-chain bridges to the Polkadot blockchain for BTG and other bitcoin-based blockchains. Blockchains are designed to be “trustless”, which means they operate through consensus, rather than having to trust a single organisation or third party to work.

The bridges, which will leverage Phala’s confidential computing technology, will first link BTG to the Polkadot ecosystem, but are also being built so that they can work with any other tokens that run on blockchains based on bitcoin’s underlying technology, which includes litecoin (LTC), bitcoin cash, dogecoin (DOGE) and bitcoin SV (BSV).

The announcement said: “This will provide a path for the liquidity of the $36bn market value of this coin family into the Polkadot ecosystem for use in smart contracts, DeFi [decentralised finance], DEXes [decentralised exchanges], and more.”

Now, let’s cast our eyes over the bitcoin gold price history. While past performance should never be taken as an indicator of future results, knowing what the coin has done in the past can give us some very useful context if we want to either interpret a bitcoin gold price prediction or make one of our own.

Bitcoin gold’s historical chart shows that despite all the price swings and volatility periods, the BTG has never climbed back to the highs of 2017.

The downtrend continued in 2022, and the BTG coin reached a 52-week low of $25.19 on 24 February as the broader cryptocurrency market took a hit following Russia’s invasion of Ukraine.

In late March, the coin rallied to reach a high of $46.89 on 23 March, but then things fell apart, with losses exacerbated by the depegging of the UST stablecoin and the collapse of the associated LUNA cryptocurrency, which meant BTG dropped to $15.25 on 12 May.

Any hopes of a recovery were nixed in June, as the Celsius Network (CEL) crypto lending platform had cancelled withdrawals confirmed the bear market and BTC fell to $13.59 on 14 June. In late July, there was a recovery which saw BTG trade at $36.21 on 29 July. 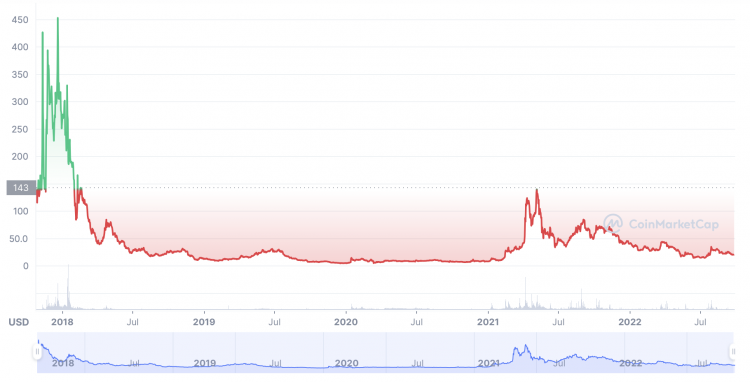 With that all out of the way, let’s take a look at some of the bitcoin gold price predictions that were being made as of 26 September 2022. It is important to remember that price forecasts, especially when it comes to something as potentially volatile as cryptocurrency, are very often wrong. Also, many long-term crypto price predictions are made using an algorithm, which means that they can change at a moment’s notice.

First, CoinCodex made a short-term bitcoin gold price prediction for 2022 which suggested that the coin could fall to roughly $21.08 on 1 October dropping further to $19.07 by 26 October. The site also said that it had found 19 technical indicators to be bearish and a further 13 to be bullish.

Next, CryptoNewsZ had a BTG price prediction which said that the coin could reach as high as $64.02 by the end of the year before, suggesting that the growth could slow to $66.67 in 2023. By 2024, the site said, the crypto could be trading at around $89.47. The site then went on to make a bitcoin gold price prediction for 2025 that saw it potentially be worth somewhere between $90 and $110, while the following year the forecast indicated that BTG could possibly be down to $92.

Finally, WalletInvestor was far more bearish then the other sites we have mentioned when it came to a bitcoin gold crypto price prediction. The site said that it thought BTG was in for a gloomy 12 months, dropping to a little under $5.06 by September 2023.

When considering a (BOND token price prediction), it’s important to keep in mind that cryptocurrency markets remain extremely volatile, making it difficult to accurately predict what a coin or token’s price will be in a few hours, and even harder to give long-term estimates. As such, analysts and algorithm-based forecasters can and do get their predictions wrong.

Where is Do Kwon? Interpol issues arrest warrant for Terra founder as LUNC price plunges