What is the Argentine peso and what drives its value?

How has the Argentine peso performed so far this year?

What has driven the Argentine peso lower in 2022?

Argentine peso forecast for 2022 and beyond

The Argentine peso (ARS) has tumbled 44% across the year as inflation has soared to over 70%.

The government is on its third minister of the economy in as many months, and Argentina currently owes $40bn to the International Monetary Fund (IMF). Is it so surprising that the peso is crumbling?

Here we look in more depth at the latest news and moves in the currency, as well as the latest Argentine peso forecasts.

What is the Argentine peso and what drives its value?

The Argentine peso (ARS) is the national currency of Argentina. Its value against other currencies, such as the US dollar (USD), is determined by a floating market-determined exchange rate. This replaced the fixed exchange rate of 1 USD to 1 ARS, which expired in 2001.

Inflation and the ongoing economic crisis are among the key drivers of the Argentine peso. Over the space of less than 100 years, Argentina has gone from being one of the world’s wealthiest southern hemisphere countries to suffering a prolonged economic downturn, with mounting debts, multiple recessions, devaluations and hyperinflation.

This massive change in the Argentine economy has come as a result of political uncertainty, poor monetary policy and external headwinds. 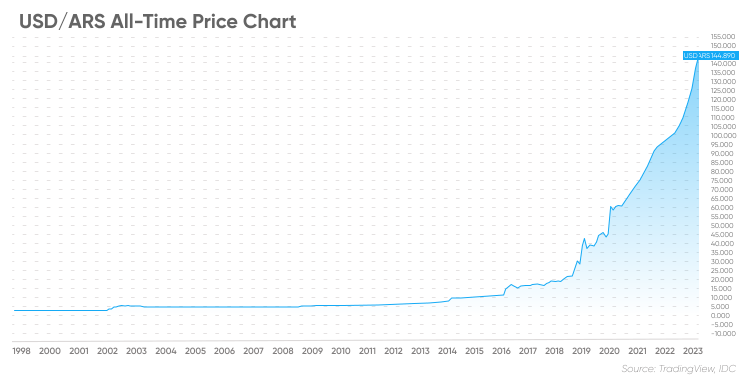 In 2018, an economic crisis hit the country and the peso halved in value. The president at the time, Mauricio Macri, agreed to a bailout loan from the IMF for $57bn – the largest in the IMF’s history, and the organisation’s 21st loan to Argentina. However, it wasn’t sufficient to stabilise the Argentine economy.

In 2019, Alberto Fernandez won the country’s presidential election, sending government bonds sharply lower. In August 2019, the USD/ARS jumped from 43.4 to 61.99.

Argentina defaulted on its debt in May 2020, thereby closing access to international credit lines.

During the pandemic, USD/ARS kept rising as Fernandez printed money to finance salary and support programmes, paving the way for hyperinflation. USD/ARS ended 2021 at 100, rising by 100% in just two short years.

In January 2022, Fernandez announced that Argentina had secured an outline deal with the IMF to restructure $44.5bn of debt from the 2018 bailout, removing the threat of an immediate clash with the institution.

How has the Argentine peso performed so far this year?

The Argentine peso started in 2022 at just over 100 pesos per 1 USD. The USD/ARS steadily climbed higher across the year, rising to 125.00 by the end of June 2022. The Argentine peso has continued to weaken and trades at an all-time low versus the dollar of 144.30 at the time of writing (22 September).

What has driven the Argentine peso lower in 2022?

The Argentina peso has tumbled in value as inflation in the country surges. Political infighting and the inability to agree on a long-term plan for the economy are adding to the currency’s woes.

Inflation in Argentina rose to a 20-year high of over 70% year on year in September. The Central Bank of Argentina is forecasting that the rate of inflation will be 95% by the end of the year.

In an attempt to rein in surging prices, the Argentine central bank raised interest rates by 550 basis points (bps) in September, taking the key lending rate to 75%. The move came following a 950bp hike in August and an 800bp raise in July. The central bank has almost doubled the benchmark policy rate from 38% in January.

The IMF and Argentina have renegotiated a new deal, following the agreement in 2018, pushing out payments from the earlier program as long as Argentina complies with certain conditions, such as introducing positive real interest rates and making progress in its quarterly reviews.

These reviews consider Argentina’s progress in accumulating foreign reserves and reducing its fiscal deficit. The risk is that if Argentina doesn’t pass the review, the country could default on the loan, potentially cutting off any remaining international financing sources.

Net cash reserves are depleted and have fallen to around $2.1bn, as of mid-August. Total reserves are about 50% of what they were three years ago, raising the likelihood of the peso devaluing.

Argentina’s unofficial exchange rate, known locally as the “dólar blue”, offers customers higher peso rates on the street rather than at official currency exchange facilities. The so-called “blue market” got its name from the blue strip on the newer one hundred dollar bills.

This mechanism is run by money dealers on the streets, who give better rates for foreign currency. In other words, you get more local currency for your dollar than if you change money in a bank or use an ATM.

Controlling rampant inflation will be a crucial focus for Sergio Massa, Argentina’s latest minister of the economy. He replaced Martin Guzman, who abruptly resigned in July after two and a half years in office. Guzman was succeeded by Silvana Batakis, who lasted just a few short weeks in the position.

Sergio Massa supports conventional approaches to taming inflation, such as higher interest rates and not calling on the central bank to print more money to fund soaring government spending. It is hoped that Sergio Massa will have more of an economic plan for the country than Fernandez, who made abundantly clear in interviews that he didn’t believe in financial plans, instead preferring a haphazard, piecemeal approach.

However, Massa has a big job on his hands, which shouldn’t be underestimated, particularly given that the government has subsidised recent surges in energy prices.

Argentine peso forecast for 2022 and beyond

According to analysts polled by Argentina’s central bank, the pair is expected to average 170.11 pesos per dollar in December 2022, as published in the Monetary Expectations Survey (REM) for August.

According to the report, the USD/ARS exchange rate averaged 135.29 in August and was expected to be 8.7 pesos higher in September at 143.98.

Looking further ahead, the REM report predicts that the USD/ARS will rise to 298.83 next year.

Fiona Cincotta, senior market analyst at City Index, believes that the Argentine peso will weaken further. She wrote in a note to Capital.com:

“Given the bleak economic outlook in Argentina, surging inflation, and the political infighting, Sergio Massa has his work cut out. When this is compared to the surging USD, boosted by a hawkish Federal Reserve and haven flows, it’s difficult to see the selloff in the peso coming to an end anytime soon. USD/ARS rising to 250.00 next year looks highly probable.”

It is important to remember that analysts’ and algorithm-based Argentine peso forecasts can be wrong. Always conduct your due diligence before trading by looking at the latest news, technical and fundamental analysis, and analyst commentary. Past performance does not guarantee future returns. And never trade money that you cannot afford to lose.

USD/IDR forecast: Indonesian rupiah on back foot as BI struggles to keep pace with aggressive Fed