The Egyptian pound (EGP) depreciated further and crashed to a near 6-year low in August against the US dollar (USD) amid deepening deficits and dwindling international reserves.

Are you interested to learn more about the Egyptian pound against the US dollar and the factors impacting the exchange rate? Read the latest analysis of the pair’s performance and analysts’ USD/EGP predictions. 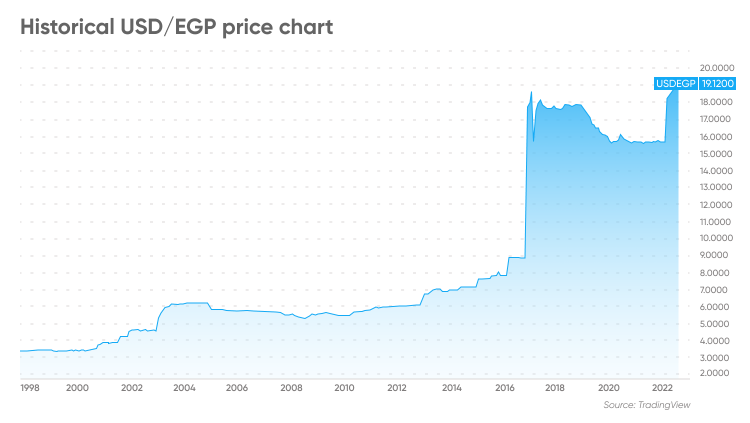 The US dollar is the currency of the world's largest economy, the United States. The currency is considered a safe-haven asset and attracts investment in times of uncertainty, which could boost the value of the currency. The perfprmance of the US dollar is driven by macroeconomic factors such as interest rates and inflation.

The Egyptian pound is the currency of the North African country Egypt. As Egypt relies heavily on grain imports and the economy remained unstable following the outflow of investments, the currency’s value is driven by the country’s net reserve and trade balance.

The Egyptian pound value has been largely stable over the past two years and the USD/EGP rate only briefly breached the 16 level for 1.5 month in June 2020. The recent volatility was triggered by the war in Ukraine, and rising inflation brought about by spiralling commodity prices.

The Egyptian pound’s depreciation started in mid-March after Russia invaded Ukraine on 24 February. The currency was trading between 15.6-15.76 against the US dollar in 2021, but the currency pair exchange rate spiked to 18.2175 on 22 March, up 15.7% from the previous day.

This depreciation was due to the Egypt Central Bank’s policy to raise interest rates by 100 basis point (1%) to curb inflation and limit large-scale portfolio outflows that were causing foreign reserve losses.

The Egyptian pound depreciation continued in the subsequent months, and USD/EGP breached the 19 level in early August and remained at that level as Egypt’s economy deteriorated.

The Red Sea resort is a popular holiday destination for Russian and Ukrainian visitors.

In addition, foreign investors pulled out billions of dollars from the Egyptian treasury market in early March. The high interest rates offered by the Egyptian bond market attracted billions of investments at the beginning of this year but investors liquidated their holdings to reduce exposure to emerging markets amid geopolitical turmoil and heightened risk-aversion.

This significantly reduced Egypt’s revenue and foreign currency reserves. To further compound matter, Egypt is the world’s largest wheat importer by volume, and it relies heavily on exports from Russia and Ukraine.

According to the trade and economic data provider Observatory of Economic Complexity (OEC), Egypt imported $5.2bn of wheat in 2020, and Russia and Ukraine accounted for 62% and 23.5% of those imports, respectively.

As global commodities contracts are US dollar denominated, the strong US dollar over the past year has squeezed Egypt's buying power.

The US dollar strength is supported by the Federal Reserve’s hawkish monetary policy to continue with interest rate hikes this year. In late July, the Fed announced its fourth consecutive rate hike with the federal funds rising to 2.25-2.5%, up 75 basis points from the previous rate.

“The war in Ukraine will have a significant impact on the Egyptian economy. It should reinforce a deteriorating trend since mid-2021.
“The reliance on imports is very high and the rise in commodity prices will affect the whole economy: rise in inflation with adverse consequences on growth and fiscal accounts, and above all a deterioration in external accounts.”

As a result of higher commodities prices and lower foreign currency revenue in Egypt, the North African country’s net international reserve has been falling this year to the lowest level since 2017.

Egypt’s account deficit is also expected to widen in 2022 as import costs exceed the country’s income.

“The current account deficit-to-GDP ratio is expected to widen in full-year 2020/21, due to the higher imports bill, as well as the adverse impact of the Ukraine war on tourism and on demand for nonoil exports, notably by Europe,” wrote the World Bank in a May note.
“The capital and financial account is expected to worsen due to the portfolio outflows, as part of the broader emerging markets selloff. That can be potentially more pronounced in Egypt given the country’s concentrated nature of trade and tourism relations with Russia and Ukraine.”

In response to the growing economic crisis in Egypt, the country’s government sought a new loan of undisclosed value from the International Monetary Fund (IMF) in March.

An IMF team met with the Egyptian government in late June to discuss the extended fund facility but there is no agreement to-date.

“The IMF staff team and the Egyptian authorities had productive discussions on economic policies and reforms to be supported by an IMF Extended Fund Facility (EFF),” said Celine Allard, the assistant director and mission chief for Egypt at the IMF on 8 July.
“In the period ahead, we are continuing our close engagement with the authorities towards reaching staff level agreement.”

In June 2020, the IMF approved a 12-month Stand-by Arrangement for Egypt with a facility sum of $5.2bn for the North African country’s balance of payments financing needs arising from the Covid-19 pandemic.

USD/EGP forecast for 2022 and beyond

The combination of widening deficit and falling foreign exchange reserves had hit investor sentiment in Egypt, leading to a bearish USD/EGP forecast.  As a result of the deteriorating economic conditions in the country, many analysts believe the currency cpi;d stay depressed around the six-year low in the short-to-medium term.

Independent economic research provider Capital Economics expected the value of Egyptian pound to fall further against the US dollar, reaching around $25 by the end of 2024.

“Spillovers from the war in Ukraine have caused Egypt’s large current account deficit to widen this year and, with the country struggling to attract stable forms of external financing, officials will need to stick to their shift to a flexible exchange rate in order to restore macroeconomic stability,” said James Swanston, Middle East and North Africa economist at the firm.

According to Gov.capital’s USD/EGP forecast for 2025, the algorithm-based predictions provider expected the currency pair exchange rate to spike to the 52.5-77.0 range in 2025.

Due to the uncertainty of the geopolitical development and the related market volatility, analysts and algorithm-based prediction sites have refrained from providing USD/EGP forecast for 2030.

Note that analyst and algorithm-based predictions can be wrong. Forecasts shouldn’t be used as a substitute for your own research. Always conduct your own due diligence, looking at the latest news, fundamental and technical analysis, and analyst commentary.

Remember that past performance does not guarantee future returns, and never trade money you cannot afford to lose.