Your guide to trading Netflix

Netflix Inc. is an American media-distribution service provider of internet television, founded in 1997 and headquartered in California. The company operates through three segments: domestic streaming (within America), international streaming and domestic DVD. The members of this service can watch original series, documentaries, feature films and television shows directly on their computers, mobile devices and internet-connected screens. Today, Netflix members can watch their favourite TV series and movies instantly in over 190 countries worldwide. As of October 2019, Netflix officially supported 26 languages for customer support and user interface purposes.

Netflix trading occurs on the NASDAQ stock exchange between the hours of 09:30 and 16:00 (EST).

How to trade Netflix CFDs

Alternatively, they can trade a contract for difference (CFD) on a particular stock, and speculate on the price difference of the underlying asset, without actually owning the asset.  A CFD is a financial instrument typically between a broker and an investor, where one party agrees to pay the other the difference in the value of a security, between the opening and closing of the trade. You can either hold a long position (speculating that the price will rise) or a short position (speculating that the price will fall). This is considered a short-term investment or trade, as CFDs tend to be used within shorter timeframes.

You can trade Netflix CFDs right here, right now. Just sign up at Capital.com and use our advanced web platform or download the best-in-class investment app to trade on the go. It will take you just 3 minutes to get started and access the world’s most traded markets.

Why trade Netflix CFDs with Capital.com

Trading the difference: When trading a Netflix CFD, you don’t buy the underlying asset itself, meaning you are not tied to it. Unlike Netflix stock trading, you can speculate on the rise or fall of the Netflix stock price. CFD trading is nothing different from traditional trading in terms of strategies. A CFD investor can go short or long, set stop and limit losses and apply trading scenarios that align with their objectives. 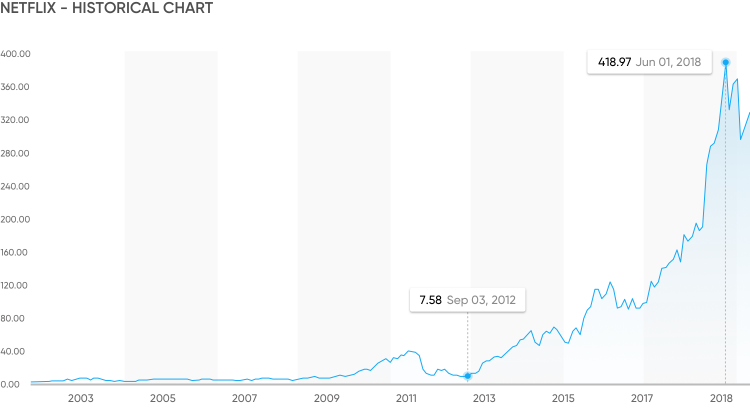 In 1997, Netflix was founded in California by Marc Randolph and Reed Hastings. By July 1999, the company had raised $30 million in venture capital, and that September launched its DVD rental monthly subscription concept.

Netflix stock history is relatively short compared to that of other companies in the industry. On May 29, 2002, only five years after its foundation, Netflix decided to go public through the Initial Public Offering (IPO), selling 5.5 million shares at $15 per share, or $1.07 per share after adjusting for stock splits, bringing in $82.5 million.

In January 2007, the company announced that it would start video streaming, and a month later, delivered its billionth DVD. By introducing video-on-demand via the internet, Netflix started to move away from its original core business model of mailing DVDs. Officially this operation, DVD.com, is still running in 2020 but with a revenue of nearly $300m it represents a very small percentatge of the company's total business.

Netflix began to expand its streaming service internationally in 2011, and, by the end of that year, it was already available almost everywhere in North, Central and South America. The business began its European expansion in January 2012, launching in the UK and Ireland.

In February 2013, Netflix launched “House of Cards”, its first original content. This step greatly boosted the Netflix market share. Over the years, with the consequent increase in the number of its original television series, the company has racked up multiple Emmy nominations. In 2018 solely, Netflix got 112 nominations.

In October 2021, Netflix had more than 209 million paid subscriptions in more than 190 countries, including 72 million in the US and Canada. Presently, the company keeps continuously growing, with an estimated 37% of the world’s internet users enjoying Netflix services.  In 2020 it reported revenue of $25bn and net profits of $2.8bn.