The stochastic oscillator is a momentum indicator that compares an asset close price with the range of its high to low prices over a certain time period, typically a 14-unit period.

What are oscillators and how to use them?

Oscillators are technical indicators that vary between two extremes. The indicator oscillates within this range and its position delivers signals determining whether a security is overbought or oversold. This is based on whether the indicator approaches the higher or lower indicator bands respectively.

What is the stochastic oscillator?

The stochastic oscillator, or sometimes known as the stochastic indicator, is a momentum indicator that compares an asset close price with the range of its high to low prices over a certain time period, typically a 14-unit period.

The indicator illustrates overbought and oversold levels and is designed to provide traders with potential buy/sell signals, depending on the price momentum. The time frames used can be as short as minutes or hours, or as long as days, weeks and months.

The stochastic oscillator is bounded between the 0 and 100 range and is displayed as 2 lines %K and %D. The %K line is the measure of the price momentum, while the %D line is a moving average of %K. The %D line is generally considered more important, as it produces more accurate trading signals.

The %K is calculated by taking the range of the current closing price and the lowest low, and dividing that by the total range of the market (highest high subtract the lowest low), and multiplying this factor by 100. The %D line is a (typically) 3-unit period Simple Moving Average of the %K line.

During a negative price trend, it is common for traders to enter the market with a short position when the %D line drops below the 50 mark. Similarly, during a positive price trend, if the asset is oversold, traders often open a long position when the %D line rises above the 50 mark. Note that the 50 mark is a commonly used one, but it can be adjusted based on your own personal trading strategies.

An alternative way to interpret the stochastic oscillator is to look at the relationship of the two lines. When the %K line exceeds the %D line, where the price momentum exceeds the asset’s moving average, this can be a signal to buy, and the inverse holds for a sell signal.

Divergences occur when a new high or low in price is not confirmed by the Stochastic Oscillator.

A bullish divergence occurs when price records a lower low, but the Stochastic Oscillator forms a higher low. This shows less downside momentum and could be foreshadowing a bullish reversal.

A bearish divergence forms when price records a higher high, but the Stochastic Oscillator forms a lower high. This shows less upside momentum and could foreshadow a bearish reversal.

As you can see on the chart below, when the oscillator reaches the upper 80 boundary, this indicates that the asset is overbought, and a sell signal is suggested when the %D line falls below 80, which is often followed by a price fall.

But when the oscillator drops below the lower 20 boundary, this indicates that the asset is oversold, and a buy signal is suggested when the %D line rises above 20, which is often followed by an increase in price. 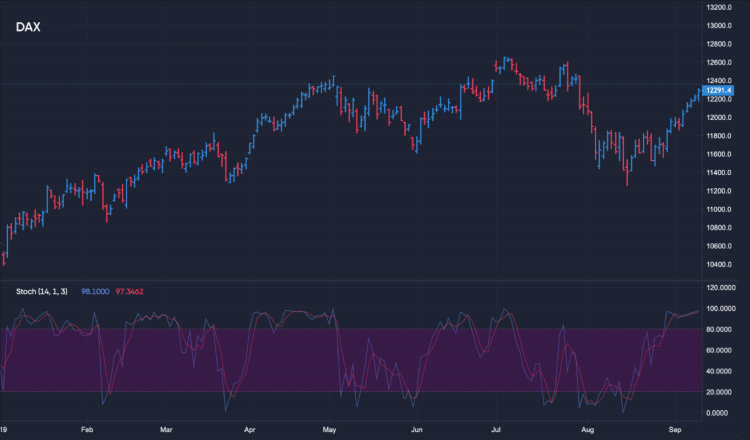 Who invented the stochastic oscillator?

This indicator was invented in the late 1950s by technical analyst and securities trader George Lane. Lane started working in the financial markets in a brokerage during the 1950s, which led him several years later to develop his own oscillator that studies momentum across historic support and resistance levels.

Why is the stochastic oscillator useful for traders?

The longer an asset is overbought, the more likely it is to go down in price, once the market realises that the price is inflated and not representative of the inherent security. Conversely, the longer an asset is oversold, the greater the likelihood that the price will start a bull run. The stochastic oscillator can then be used to gauge when a price reversal is likely occur.

Trending articles
Steel price forecast 2022: What’s next for the market?
by  Yoke Wong
FTSE futures: Everything you need to know
by Mensholong Lepcha
US gas helping Europe’s shortfall - will it ease soaring prices?
by Angela Barnes