2022 has been a rather bleak year for Swedish audio streaming company Spotify (SPOT).

One possible reason for its falling share price was American commentator Joe Rogan’s podcast on the Spotify platform, which allegedly spread misinformation related to Covid-19 – a claim Rogan refuted, saying that his goal was to create lively conversations with varying opinions, and that he would do his best in the future to “balance things out.”

In addition, analysts’ concerns over the firm’s growth prospects over the long term, the inflation-hit global economy, and lower ad-supported gross profits in the year’s second quarter have also put a drag on the stock price.

In this article, we will look at the company’s current financial performance, latest earnings, as well as the prospects for its stock price and potential stock split.

Launched in October 2008, Spotify is a Stockholm-headquartered audio streaming and media services providing company. The firm has operations in 183 countries and territories, including offices in India, Canada, the USA, China, Mexico and across Europe.

Spotify trades on the New York Stock Exchange (NYSE) under the ticker SPOT. Shares of the company became public in April 2018. It closed its first trading session at $149. Shares reached an all-time high closing price of $364.59 in February 2021.

As of June 30, the company had 433 million monthly active users, including 188 million premium subscribers.

The Spotify stock price has fallen by more than 62% year-to-date, as of 22 September, a wider loss than that incurred by the NYSE Composite index (where the stock is listed), which has lost 18%. 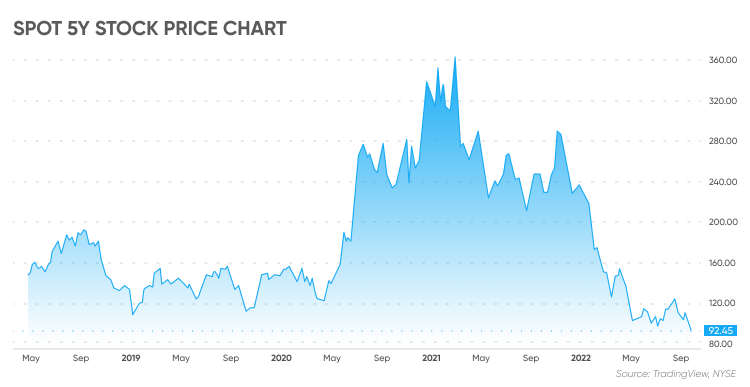 In its most recent Securities and Exchange Commission (SEC) filings, the company revealed that unaudited revenue increased to €2.86m from €2.33m during Q2 2022.

A major reason behind the company incurring a loss in the second quarter was its spending on marketing, aimed at growing its subscription base. The company reported 433m monthly active users (MAUs) at the end of the second quarter, including 188m premium subscribers.

The firm’s monetisation model is based on subscriptions and advertising. The filings also revealed that the number of Spotify’s premium subscribers increased 14% year-over-year in Q2 to 188m, while MAUs surged 19% to 433m.

In order to understand if the Spotify stock is a buy, hold or sell from its second-quarter earnings report, it’s useful to look at the company’s gross profit from premium subscribers and ad-supported subscribers.

The premium revenue of €2.5bn in Q2 2022 marked an increase of 21.8% from €2.1bn in Q2 2021, which outpaced premium subscriber growth of 14% during the period, due to price increases and changes in foreign currency exchange rates.

Will a SPOT stock split help the Spotify stock recover?

What is a stock split? A stock split is when a company increases the number of shares to increase liquidity. A stock split is usually carried out to make the stock attractive for investors by lowering the price for each share.

For example, if a company's shares are valued at $70 and an investor owns 100 shares, the total worth of his investment will be $7,000. If the company then splits it stock by two, the investor will now own 200 shares, but at a value of only $35 each – his total investment, however, will still be worth $7,000. This is an example of a 2-for-1 stock split.

This can lower the stock’s price, making the company’s shares more affordable to retail investors by increasing its liquidity, while simultaneously having no effect on the firm’s fundamentals, such as its business performance and underlying value.

Tesla, for instance, split its stock in late August 2022 in line with a 3-for-1 ratio, following the likes of other high-growth companies like Amazon (AMZN) and Google-parent Alphabet (GOOGL) in addressing the need to diversify investor base.

A stock split may attract retail investors’ attention who perceive the company to have strong growth prospects, but refrain from purchasing its shares because of the high price. A stock split thus may lead to an increase in purchasing activity for the stock, and lead to a short rally.

Analyst views on SPOT price: where next for the stock?

Analyst ratings compiled by MarketBeat shared different price targets for the Spotify stock. The consensus rating was ‘hold’ based on 26 analyst views, as of 23 September.

According to the algorithm-based Spotify share price forecast from AI Pickup, as of 23 September, the stock price could average $92.89 in 2022.

The site’s SPOT stock forecast for 2023 saw the price average rising to $100.58. The service suggested the stock could trade at the same level in the next eight years – the lowest annual average SPOT could trade at, according to the platform, was $86.42 in 2027.

Wallet Investor did not provide Spotify stock price predictions for 2030.

When looking for a Spotify stock forecast or possible Spotify stock split news, it’s important to bear in mind that analyst and algorithm-based predictions can be wrong and shouldn’t be used as a substitute for your own research. Always conduct your own due diligence on the stock before trading. And never trade money you cannot afford to lose.