Silver price analysis: what happens after the Reddit saga?

On Monday, silver prices hit an eight-year high at $30 per ounce as the precious metal became another target of a trading bonanza led by Reddit’s community WallStreetBets. The ongoing market frenzy started when smaller retail investors decided to team up and boost share prices of heavily-shorted stocks like GameStop and AMC.

This silver analysis reviews the market’s latest developments, factors driving the price today and the outlook for the metal going forward. In addition, you will find a video in which Capital.com’s chief market strategist, David Jones, provides a detailed silver price chart analysis and a suggested trading setup.

Silver price analysis: the story of a very volatile metal

Silver started 2020 trading near $18 per ounce, right before falling to $12 per ounce in March during the broader market selloff caused by Covid-19. It then sharply rebounded in April and, within weeks, recovered to its pre-pandemic levels.

Investor appetite for physical commodities picked up in summer as governments across the world started introducing spending measures to support the global economy. In August, the silver price tried to approach the $30 mark. However, it reached $29.85 per ounce and dipped lower to eventually return to $22.50 per ounce by the end of November.

Throughout December, the commodity traded in the range of $24-$27. At the end of the year, several analysts released notes on the metal’s outlook, forecasting a possible silver price rise above $30 per ounce.

But while they did foresee the silver price increase in 2021, Monday’s hike was anything but expected.

After Reddit-driven investors successfully short squeezed GameStop’s stock, it was the metal’s turn. During the weekend, retailers faced a massive demand for silver coins and bullions.

APMEX, the globe’s largest online retailer of precious metals, had to report that due to “unprecedented demand on physical silver products, we are unable to accept any additional orders on a large number of products, until global markets open Sunday evening”.

Singapore’s Indigo Precious Metals also struggled to process orders, saying: “There are massive shortages. We’ll be completely out of stock if it carries on like this; the first time since our company opened in Singapore seven years ago.”

After silver closed January at $26.98 per ounce, it soared up to $30 per ounce, an eight-year high, on February 1. However, the momentum was short-lived and the price slipped back to $26.37 per ounce by the time of writing, February 2. 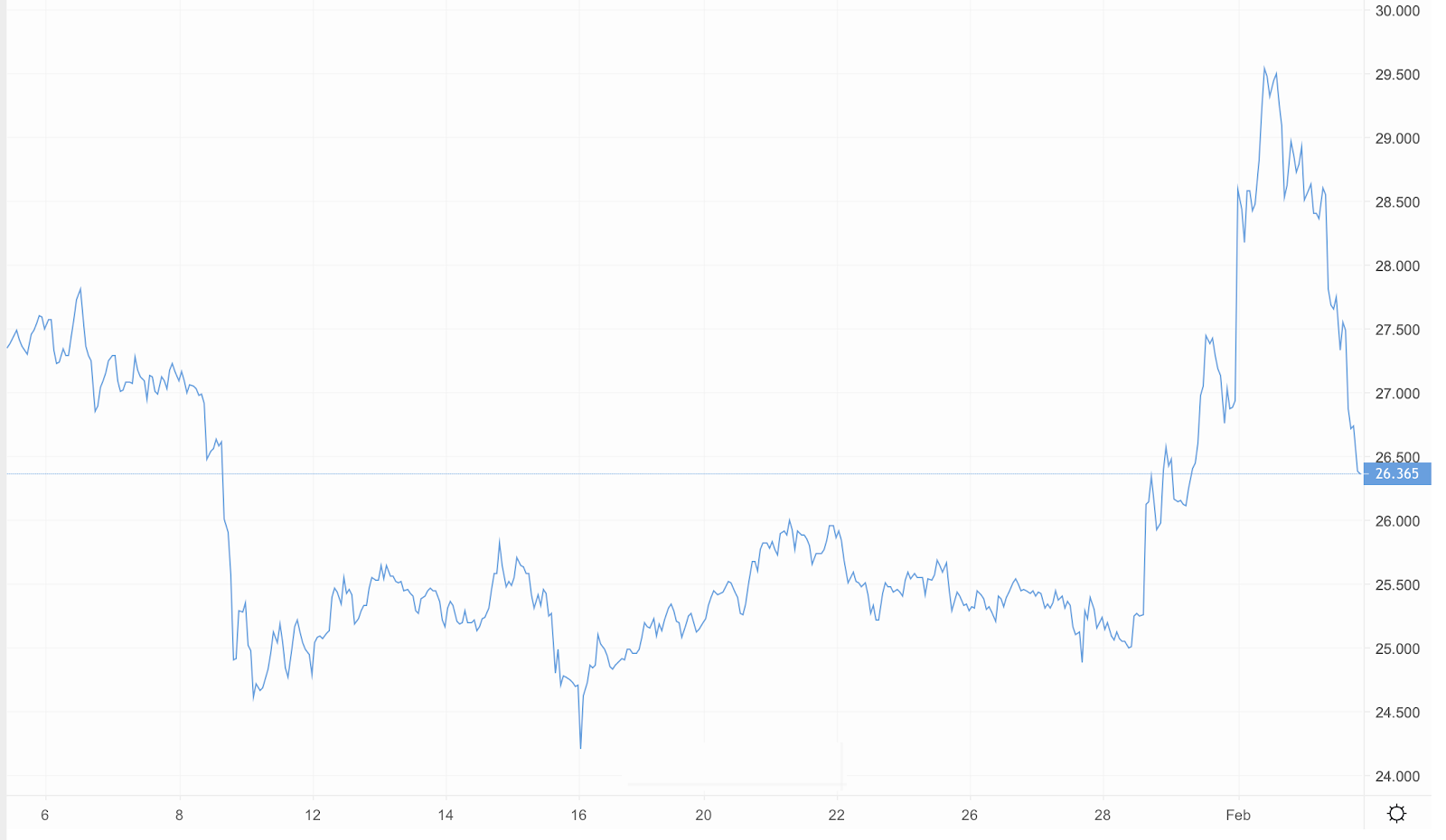 What does the recent silver price record mean for investors? Check out our latest silver market analysis video where David Jones, Capital.com’s chief market strategist, looks at whether there is a trading opportunity at current levels:

What caused silver prices to rise and who is to blame for the rally?

Last week, a plethora of posts instigating smaller retail investors to buy the metal flooded Reddit, suggesting that an increase in the metal’s physical price would negatively affect Wall Street’s big players who went short on the commodity. On Monday, retail investors pumped a total of $93m into the iShares Silver Trust (SLV), the globe’s largest silver-backed ETF.

Howie Lee, an economist at OCBC Bank, noted: “Last week’s events have shown it to be unwise to doubt the purchasing power of retail investors, and this has been sufficiently demonstrated again on the silver market.”

“They may find it a bit harder to squeeze the silver market than they did with GameStop – the former is much bigger and more liquid – but the momentum looks like it rests with them at the moment.”

However, several WallStreetBets users insisted that the community had nothing to do  with the metal’s surge. Some said that hedge funds were the ones to blame as they tried to distract smaller investors from heavily-shorted stocks like GameStop. In one of the posts, the move was called a “hedge-fund coordinated attack”.

Neil Wilson, the chief market analyst at Markets.com, said there could be a few factors behind the rally: “What we don’t know is exactly how this is happening – clearing out of shorts by worried hedge funds, retail-driven bids, ETF flows driving the physical market, smart money front-running the trade, or a combination of all these.”

Elizabeth Warren, the senior US senator, called for the SEC to investigate the matter, adding: “We actually don't know who all the players are in all this – whether there's big money on both sides.”

What happens next: will silver prices go up in 2021?

The battle between Wall Street and the smaller retail investors seems to be poised to continue, with the latter having more power than ever before. However, we still believe that it is crucial to consider not only the current sentiment but also fundamentals when choosing whether to invest in an asset.

Craig Hemke, an analyst and founder of TF Metals Report, said: “What they were able to do with GameStop is only one individual stock and on the other side are the hedge funds, which can get squeezed with margin calls. That’s going to be challenging to do with silver because it’s a big market and the entities holding the short positions are held by the banks and they have deep pockets.”

Speaking of the fundamentals, the silver market is set to be further driven by the laws of demand and supply, inflation, stimulus and economic recovery.

Daniel Pavilonis, senior markets strategist at RJO Futures, said: “Ultimately, people are looking a bit further out as Covid-19 cases are dropping. States will open up as vaccines are on their way along with more stimulus. People are putting that puzzle together and seeing there will be more inflation.

"With more money being printed and high inflation, we could see a lot higher silver prices."

Pavilonis noted: “If we see a period of inflation as we did in 1970-80, silver will do well just like then. Even with Fed raising rates to the highest levels back then, silver went up to $50.”

As the global economy starts to recover from the pandemic and the solar and electric vehicle technologies, which make up a hefty part of the metal’s demand, continue to develop at a rapid pace, silver prices have potential to rise significantly in the foreseeable future.

Looking further ahead, the online forecasting service puts the price of the metal at $37.9 by January 2026.

We suggest investors and traders exercise caution and do their homework before taking positions in silver. We recommend you do as much research as possible, considering the latest market trends, expert opinion, and fundamental and technical analysis.

Capital.com Silver price analysis: what happens after the Reddit saga?