News and Analysis News Stocks S&P 500 index to gold ratio: What does it mean and where might it go?
Menu

S&P 500-gold ratio: More downside to come in the near term?

The S&P 500-to-gold ratio indicates how many ounces of gold are required to purchase the S&P 500 index (US 500) at any given time and it’s an extremely important market indicator. It measures the relative strength of the US stock market versus the price of gold.

In essence, the S&P 500 to gold ratio serves as an important barometer for assessing risk appetite on financial markets.

The higher the ratio, the more valuable US equities are relative to gold prices. When the ratio goes up, it indicates that investors are becoming more confident in taking on higher risk, as they are opting to purchase stocks rather than placing their cash into a non-yielding asset like gold.

On the other hand, a declining ratio between the S&P 500 and gold is a sign that economic troubles are arising, and investors flee riskier assets like equities and flock into safe havens like gold.

What does history tell us, and where is the S&P 500/gold ratio headed next? 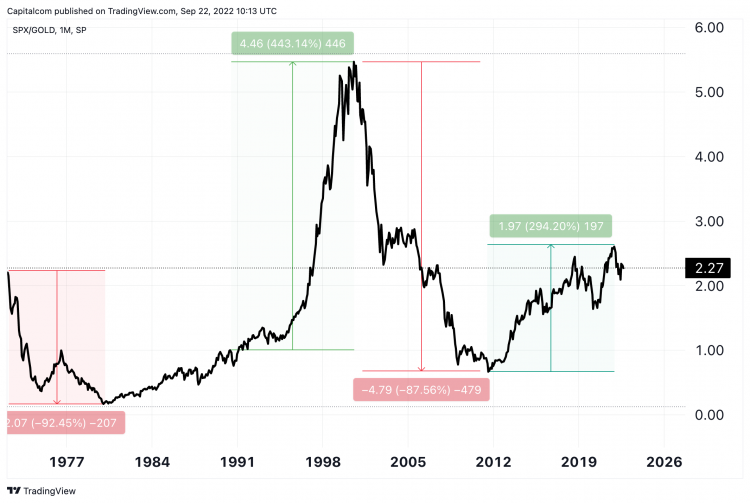 Looking back over the last 50 years, the relationship between the index of the 500 most capitalized US stocks and gold has seen spikes followed by severe falls.

Those who had invested in the S&P 500 index while shorting gold in the 1970s would have lost 93% of their money.

As a result, the 1970s were an extremely negative period for equities and an extraordinarily positive period for gold, as stagflation (low growth and high inflation) killed stocks and elected gold as the best safe-haven asset.

During the 1990s, the tide dramatically shifted in favour of stocks and the S&P 500.

During this decade, but especially in the last few years at the turn of the century, the US stock market has been shaped by the dot-com bubble, which caused unprecedented gains in the S&P 500 and Nasdaq indices.

The Federal Reserve's adoption of extremely accommodative monetary policies has given investors new incentives to take on the risk of US stocks. As a result, the ratio of the S&P 500 to gold has risen by 300%, from 0.66 to 2.67, between July 2011 and January 2022.

S&P 500-gold ratio: More downside to come in the near term? 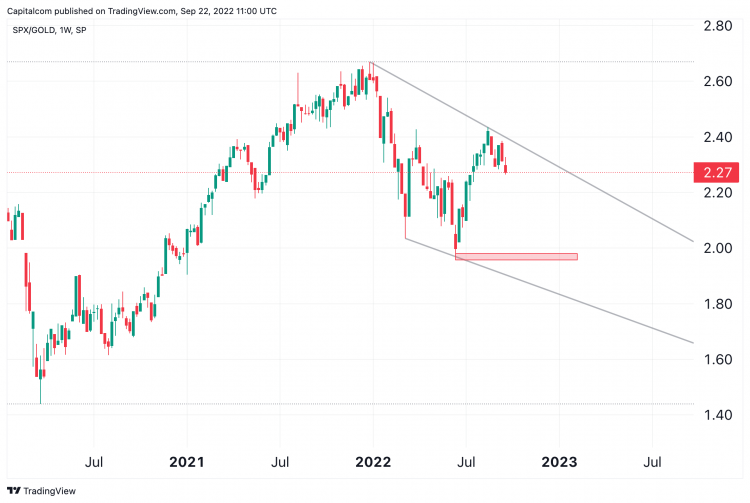 The ratio of the S&P 500 to gold has begun a downward trend in 2022, as the stock market's decline outpaced that of gold.

The ratio, which peaked at 2.66 at the beginning of the year, is currently trading at 2.27 as of this writing.

Technically speaking, the S&P 500's relationship to gold appears to have formed a falling wedge pattern, which may portend the continuation of a downward trend in the months to come.

The latest Federal Reserve's economic projections portray a bleak picture for the US economy next year, with falling growth, rising unemployment, higher interest rates and sticky inflation. Growth is expected to remain well below potential, while interest rates are seen to rise to 4.6% in 2023. US companies will face severe downside pressure on their profit margins as a result of the latest Fed's economic outlook.

If this scenario plays out, it will be particularly bad for the stock market while boosting the appeal of gold amid rising economic uncertainties.

A sharp slowdown of the US economy, or a so-called “hard landing”, could cause the S&P 500 to gold ratio to fall further from here.

When looking at the S&P 500-to-gold ratio daily chart, the nearest support is located at 2 level mark (June lows), which is 13% lower than current levels.

Porsche IPO: Could the German sportscar maker close the gap on Ferrari?

Capital.com S&P 500 index to gold ratio: What does it mean and where might it go?