Pressure on Bank of England as UK wage growth rises

Sterling lost ground on Wednesday after UK labour market data showed a rise in the rate of unemployment, but signs of underlying wage growth in December kept alive some expectations of a May interest rate rise.

A tick higher in the rate of unemployment to 4.4% in December from 4.3% in November foiled expectations of a continued 4.3% rate.

Average weekly earnings in real terms - adjusted for price inflation - fell by 0.3% from a year earlier
by ONS data

But investors were chiefly concerned over the wage element of Wednesday's data release and what it would likely mean for UK interest rates in the coming months - particularly given the elevated rate of consumer price inflation.

Average earnings including bonuses remained stuck at 2.5% in December, unchanged from January and matching expectations.

Excluding bonuses, average earnings increased by 2.5% on the year ago level, up from 2.3% in November and beating expectations of 2.4% growth, hinting at signs of underlying growth in employee pay.

The Office for National Statistics, which compiled the report, said the latest estimates showed that average weekly earnings in real terms - adjusted for price inflation - fell by 0.3% from a year earlier.

Indeed, consumer price inflation in December was 3% - and remained so in January - continuing the squeeze on household budgets.

Growth in underlying wages, however, showed the continuing tightness in the labour market was beginning to have an impact on pay. 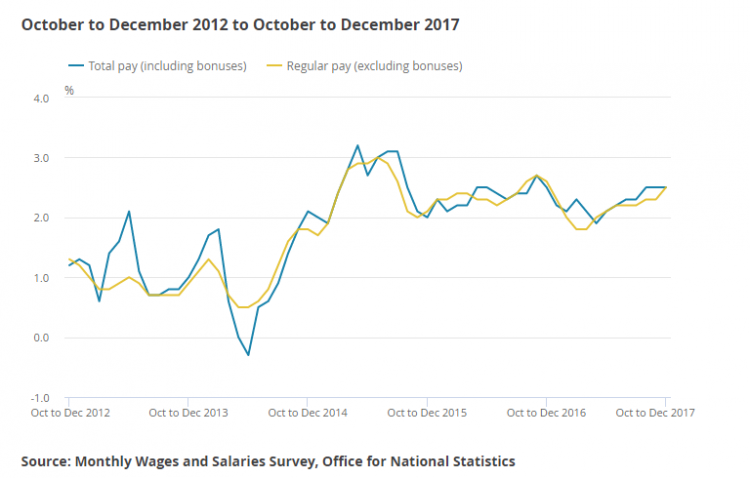 The biggest riddle for investors, however, was whether the data represented enough of a threat to inflation expectations to compel the Bank of England to raise interest rates in May.

Lucy O'Carroll at Aberdeen Standard Investments believed so: "For the advocates of a rate rise, a further pick-up in pay growth provides confirmation that rates need to go up in May. Otherwise, a very tight labour market and accelerating wages could threaten the Bank’s inflation target."

Samuel Tombs at Pantheon Macroeconomics thought not: "We continue to doubt that wage growth will recover fast enough to compel the MPC to hike rates again as soon as May."

Chris Williamson at IHS Markit didn't commit either way, but believed the upturn in pay set against the labour market losing steam would create some doubts.

He said: "For a May rate hike to happen, policymakers will want to see not only persistent price pressures, but also signs that the economy has sufficient growth momentum to cope with a tighter monetary policy stance."

Sterling weakened following the report, suggesting investors were beginning to doubt a May hike remained on the table.