The platinum price fell over the past week as lower automotive catalytic demand and a stronger US dollar weighed on the market.

The November platinum contract traded on the Chicago Mercantile Exchange (CME) settled at $1,014 an ounce on 22 November, down 5.5% over the week from $1,073 on 16 November. Platinum prices started falling in mid-November after hitting a four-month high.

The automotive sector is the largest consumer of platinum, followed by other industrial end-users, like chemical, petroleum, electrical, glass, medical and biomedical.

Car makers reduced the number of vehicles manufactured this year as a result of the global semiconductor shortage, leading to lower platinum demand, which has weighed on prices. 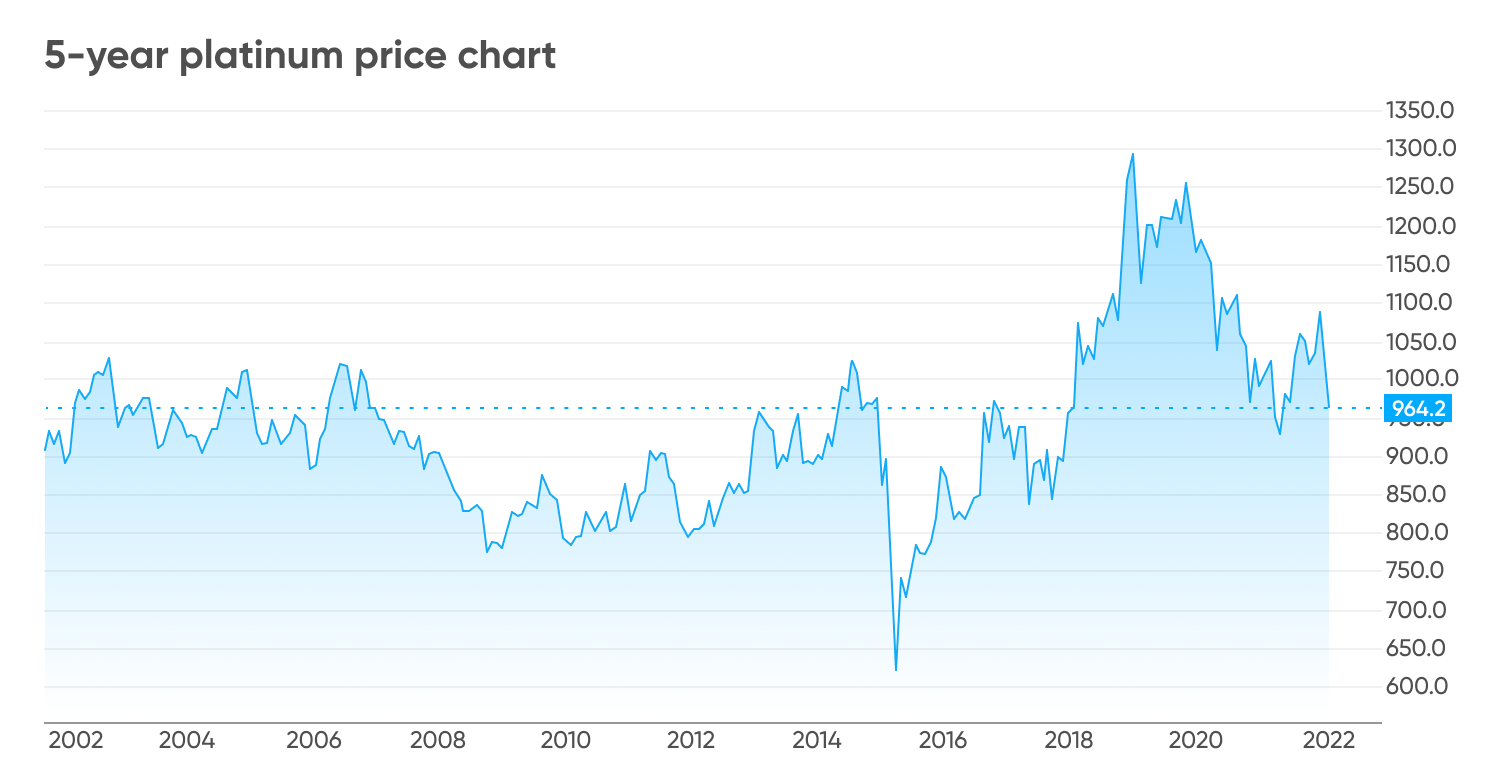 The US dollar index (DXY) has been rising over the past month, hitting an 18-month high at 96.55 on 22 November. Although the index has since dropped to 96.45 on 23 November, it remained around that 18-month high.

How will platinum perform over the rest of 2021 and beyond? Read this platinum analysis to learn more about the platinum price trend, analysts’ forecast and industry development affecting the precious metal market.

According to industrial consumer Johnson Matthey’s platinum price graph, platinum started the year at above $1,100 an ounce and surged past $1,300 in February – a seven-year high – as the recovering automotive sector lifted demand. Prices started to fall in March as vehicle production constraints weighed on the market. Platinum prices hit a low at $930 an ounce on 20 September before rebounding to above the $1,000 level in the next few sessions.

The rally at the end of October was driven by inflationary concerns – prices for consumer goods and services have been rising globally throughout the year.

The US Consumer Price Index (CPI) in October was up 6.2% from a year ago, 0.8% higher from September and at a 30-year high, according to the US Bureau of Labor Statistics released. The CPI has been rising every month since January. The index measures what consumers pay for goods and services, including clothes, groceries, restaurant meals, recreational activities and vehicles.

Despite the rally over the past two weeks, platinum has entered a bearish phase, according to technical analysis by financial news and data provider economies.com, which says: “Platinum price confirmed its surrender to the bearish bias domination to notice touching the first negative target at 1010.00.

“The consolidation of the moving average 55 above the current trades confirm the continuation of the negativity, to expect breaking the current support line and reach additional negative stations that might extend towards 985.00 followed by 949.00 levels.”

The number of new passenger car registrations in the EU fell in October – the 665,001 total was down 30.3% compared to the same month last year. It’s the fourth consecutive month of decline this year, according to data published in November by the European Automobile Manufacturers’ Association (ACEA). The total number of new car registrations in the EU were at 8.2 million units, up 2.2% year-on-year in the first ten months of 2021.

“Despite the recent drop in sales due to the ongoing impact of the semiconductor supply crisis, substantial gains earlier in the year helped to keep cumulative volumes in positive territory,” said ACEA in its report.


In China, vehicle output fell in October to 2.33 million units, down 8.8% from the same month last year, data from the China Association of Automobile Manufacturers (CAAM) shows. Total output in the first ten months this year increased by 5.4% year-on-year to 20.59 million units.

“The semiconductor shortage will still be present in the short-term, therefore there will be increased pressure [in the auto market] in the next two months,” said CAAM.

As a result of the automobile sector’s ongoing manufacturing constraints caused by the global semiconductor shortage, many market participants have cut their expectations for the platinum price this year.

According to a Reuters poll conducted in late October, analysts and traders have lowered their price forecasts for platinum this year to an average of $1,000 an ounce in the fourth quarter and $1,100 an ounce in 2022.

According to Heraeus, a platinum group metals (PGMs) processor and trader, China’s VI emissions legislation for HDVs introduced in July this year is expected to increase the average loadings used in autocatalysts significantly, increasing platinum consumption in this area. Heraeus notes:

“The latest rules are the tightest yet and require vehicles to have much more sophisticated emissions control technology, including PGM-bearing catalysts, where previously selective catalytic reduction (non-PGM) might have been sufficient.”

However, increased platinum demand brought about by this legislation was offset by lower HDV sales in China.

Data from CAAM says that commercial vehicle sales fell by 2.5% year-on-year to 4.1 million units in January to October in 2021. Commercial vehicles include small, medium-sized and heavy-duty trucks. HDV sales in October registered the biggest decline and fell by 61% or 84,000 units year-on-year.

Lower HDV sales in China were mainly caused by advance purchases before the implementation of stricter emission standards.

“The new rules have added to the cost of vehicles and, as has been the case prior to the introduction of previous standards, customers purchased new trucks ahead of the change,” said Heraeus.

“Year-to-date HDV sales are down slightly compared to last year, which saw record sales, but HDV platinum demand is still expected to be stronger this year than last year owing to the higher loadings.”

According to Heraeus, global platinum demand will benefit from increased HDV sales in other regions in 2022, such as India. Global demand from this sector is predicted to rise by 3%.

“Growing demand from this and other end-uses next year is a slight positive for the platinum price even if the market is in substantial surplus again (1 million ounce). More relevant for the price may be what happens with inflation and whether real assets benefit. A pick-up in investment demand could propel the price higher, as happened in the second half of 2020 and early 2021,” said Heraeus.

Rate this article
Rate this article:
72% 28%
Ready to get started?
Capital.com Download
The difference between trading assets and CFDs
The main difference between CFD trading and trading assets, such as commodities and stocks, is that you don’t own the underlying asset when you trade on a CFD.
You can still benefit if the market moves in your favour, or make a loss if it moves against you. However, with traditional trading you enter a contract to exchange the legal ownership of the individual shares or the commodities for money, and you own this until you sell it again.
CFDs are leveraged products, which means that you only need to deposit a percentage of the full value of the CFD trade in order to open a position. But with traditional trading, you buy the assets for the full amount. In the UK, there is no stamp duty on CFD trading, but there is when you buy stocks, for example.
CFDs attract overnight costs to hold the trades (unless you use 1-1 leverage), which makes them more suited to short-term trading opportunities. Stocks and commodities are more normally bought and held for longer. You might also pay a broker commission or fees when buying and selling assets direct and you’d need somewhere to store them safely.
Capital Com is an execution-only service provider. The material provided on this website is for information purposes only and should not be understood as an investment advice. Any opinion that may be provided on this page does not constitute a recommendation by Capital Com or its agents. We do not make any representations or warranty on the accuracy or completeness of the information that is provided on this page. If you rely on the information on this page then you do so entirely on your own risk.
Share Article
Price overview in 2021 Falling vehicles output in Europe and China Analysts cut short term platinum price forecast Heavy-duty vehicles to drive platinum demand FAQs