“Fintech innovation also appears to be concentrated in the e-commerce space, which has given rise to some new competitors. On the consumer side, services such as Apple Pay represent competition for PayPal. Competition on both sides could chip away at PayPal’s position,” he said.

Is PYPL a buy now?

Will PayPal stock go up?

In the first seven month of this year, the stock price of payment giant PayPal (PYPL) has not yet been able to reverse its downtrend. The end of Covid-19 restrictions in most countries has seen less online shopping and a reduction in the need for digital payment.

Rising inflation – at the highest level in four decades in the US – has forced consumers to cut their spending. The ongoing Russia-Ukraine war has raised the prices for food and energy, exacerbated inflation and prompted investors to dump growth stocks, especially in technology companies.

This article examines whether other factors have affected PYPL’s ongoing downtrend, the latest stock news and PayPal’s share price forecast from analysts.

A PayPal's stock analysis by TradingView showed PayPal’s closing price on 20 July was nearly 74% below its all-time high closing price of $308.53 a share, achieved on 23 July 2021.

PYPL fell nearly 25% in a single day for the first time this year on 2 February, after the company announced financial results for the fourth quarter of the fiscal year 2021. The downtrend has continued since then.

The stock had managed to book its biggest gain in a single day this year, closing 11.48% higher on 28 April, a day after it reported that its revenue in the first quarter for the fiscal year of 2022 was above analysts’ expectations. The gain was short-lived and PYPL resumed its decline.

PYPL’s technical analysis showed bearish sentiment in its weekly and monthly indicators, suggesting a strong sell. At the time of writing (21 July), most moving averages (MAs) suggested a ‘sell’. The Relative Strength Index (RSI) reading was was 58.62, indicating ‘neutral’. An RSI reading at 30 or below shows that the stock is oversold or undervalued 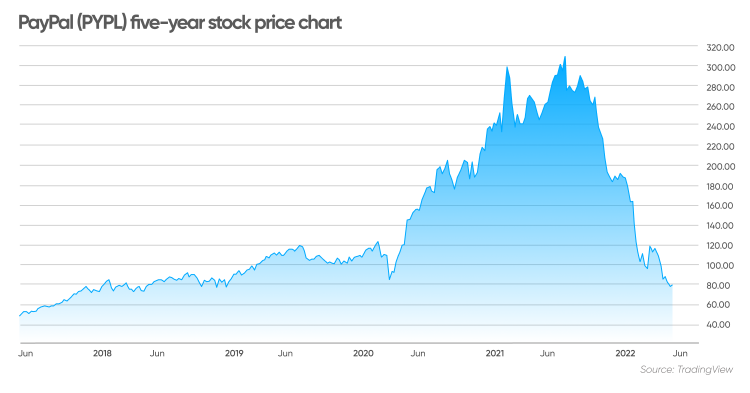 What is your sentiment on PYPL?

Give PYPL a try

Inflation is likely to remain bad news for the California-based fintech leader. The US annual inflation rate, as indicated by the Consumer Price Index (CPI), soared to 9.1% in June from 8.6% in May. The most recent data indicated that inflation remains elevated, which is unlikely to change the US Federal Reserve’s (Fed) already aggresive stance.

This year, the Fed has raised borrowing costs three times. First, by 25 basis points in mid-March, followed by a 50-basis-point increase in early May and a surprise 75bps raise in mid-June.

Brett Horn, Morningstar’s senior equity analyst, in a note issued on 11 July, said that PayPal is likely to face headwinds from e-commerce and electronic payments which had turbocharged the company’s growth during the Covid-19 pandemic.

“Longer term, though, the picture is less certain, and we see a mix of competitive opportunities and threats that create a fairly wide range of outcomes. PayPal remains a somewhat unique player within the payments space. We think this remains its key strength, but its position on both the merchant and consumer side could be challenged over the long run,” Horn said.

“Fintech innovation also appears to be concentrated in the e-commerce space, which has given rise to some new competitors. On the consumer side, services such as Apple Pay represent competition for PayPal. Competition on both sides could chip away at PayPal’s position,” he said.

Morningstar maintains its fair value estimate for PYPL's stock price at $135 per share.

“The payment processing industry is evolving, and it is possible that new competition and future disruption could significantly reduce the profitability PayPal can generate or cut it out altogether. As the company’s revenue is directly tied to revenue at its merchant customers, PayPal is sensitive to macroeconomic conditions. PayPal’s international operations present currency and execution risk. Some governments have shown a preference for local payment processors, which could freeze PayPal out of certain markets,” said Horn.

Horn added that the company’s peer-to-peer or P2P, Venmo, is unlikely to become a major driver anytime soon, despite it generating $900m in revenue in 2021 or 4% of Paypal’s revenue. In addition, its future is difficult to predict.

Trading Economics expected PayPal to trade at $71.88 by the end of the second quarter and at $66.14 in one year. The economic data provider based its PayPal’s stock predictions on projections made from global macro models and analysts’ expectations.

The two forecasting services did not provide PYPL’s stock forecast for 2030.

When looking at PYPL stock forecasts, it’s important to remember that analysts’ forecasts and price targets can be wrong and should not be considered a recommendation to invest in the company.

It’s vital to do your own research and consider the latest market trends and PayPal stock news. Your decision to trade should depend on your attitude to risk, your expertise in the market, the spread of your investment portfolio and how comfortable you feel about losing money. And never invest more than you can afford to lose.

Is PYPL a buy now?

Analysts tracked by stock analysis companies mentioned in this article recommended a ‘buy’ for PYPL’s stock, as of 21 July. However, keep in mind that there are many factors that influence analysts when they offer ratings for a company, including the company’s performance and macroeconomic factors. As a result, ratings can change over time, depending on those factors.

Will PayPal stock go up?

Analysts and algorithm-based forecasting service Gov Capital expected the stock to go up within a year in their PayPal’s share price forecast. On the other hand, Wallet Investor expected the stock price to drop in the same period.

Bear in mind that stock markets remain volatile, and there may be price fluctuations. Both analysts and algorithm-based websites do get their predictions wrong. Always rely on your research. And never invest money that you cannot afford to lose.

Snap stock forecast: Will SNAP rebound to above IPO price?