By Angela Barnes and Piero Cingari

At the time of writing, gas futures on the benchmark Dutch Title Transfer Facility (TTF) were up 6.5% to €206.935 per megawatt-hour (MWh), while US natural gas futures were also up, by about 4%, on stronger demand forecasts.

However, a Goldman Sachs report said that European natural gas prices could drop by half in the next six months because EU countries have been getting on top of storage challenges.

The US bank said it expected natural gas prices to fall from around €215 MWh to below €100 MWh by the end of the first quarter of next year.

It comes after Russia extended the shutdown of gas flows to Europe via the key Nord Stream 1 pipeline, leaving many countries scrambling to make up for the shortfall, despite plans to permanently move away from Moscow’s commodities regardless.

The US is among the countries that has been helping Europe, sending record supplies of LNG, which has added price support.

According to Natural Gas Monthly and Energy Information Administration (EIA) estimates for April 2022, the United States shipped 74% of its LNG to Europe during the first four months of this year, compared to an annual average of 34% last year.

Piero Cingari, commodities analyst at Capital.com, shared his thoughts on where the price of US natural gas may go next.

“US natural gas prices have formed a head and shoulders top pattern, which may signal a weakening of the current major bullish trend and a subsequent reversal into a bearish one.

Click for more on the head and shoulders chart pattern 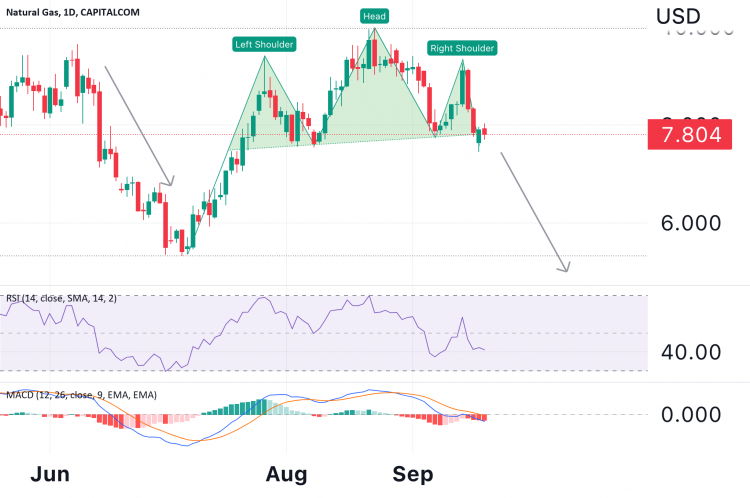 Cingari also noted that a brief breakdown was seen in the September 19 session but said natural gas is now testing the neckline of the head and shoulders pattern.

“Additional bearish technical signals for the price of US natural gas include the MACD oscillator dipping below the zero line and the RSI slightly pointing south,” he added.