Precious metals were lacking shine on Friday morning, ending the week on a low note, with gold, silver, platinum and palladium all down, courtesy of the US dollar hitting a one-month peak in the previous trading session.

The US Federal Reserve’s July meeting minutes which were released on Wednesday painted a grimmer picture of the US economy, with the central bank highlighting that it would continue with its aggressive interest rate hikes for now. Gold had dropped 0.3% to about $1,752 per troy ounce, struggling to recover from a three-week low seen in the last trading session, and falling for the fifth day in a row. The precious metal also saw a weekly decline of about 2.7%.

According to Piero Cingari, analyst at Capital.com, “The metals market suffered a particularly negative week, with gold and silver falling for five days in a row.A slew of negative macroeconomic events contributed to the downward pressures.

Earlier this week, Chinese economic data that fell short of expectations fuelled fears of a global slowdown, prompting China to cut interest rates unexpectedly. Then there were the minutes from the July FOMC meeting, which reminded us that the cycle of rising interest rates is still far from over.China slowing down and the Fed raising interest rates are both bad news for gold, silver, and copper as well.

Technically, after four weeks of rallying and breaking the 50-day moving average, gold hit the bearish trendline from March and 8 highs, causing a pullback .In the short term, bears eye the support located between 1,730 and 1,734 as a possible test.” 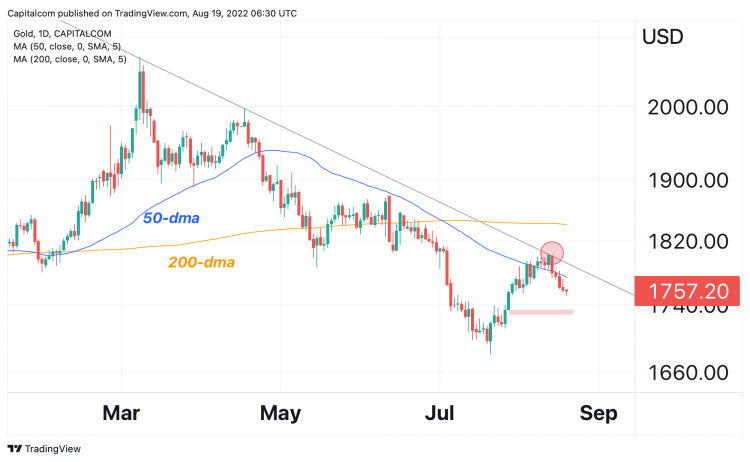 Gold fell for 5 consecutive days due to a strong

Platinum inched lower 0.5% to $906 per troy ounce, with a weekly decline of more than 5%, also pressured by potentially rising interest rates. Palladium was also subdued, falling about 0.5% to $2,146 per troy ounce, on account of a disappointing recovery in the global automotive sector.

Copper traded flat at about $3.60 per pound, with a weekly decline of 1.3%, pressured by disappointing industrial data from China recently, as well as the International Monetary Fund and several investment banks slashing the country’s growth forecasts. Iron ore dropped from CNY 707 per tonne in the last trading session, to about CNY 705 per tonne on Friday morning. Aluminium traded 0.3% lower, at about $2,403 per tonne, with a weekly decline of about 4.6%.

The US dollar (DXY) inched up from 107.5 in the previous trading session to about 107.7 on Friday morning.

The US Treasury yields climbed up 4 basis points to 2.9%.

GDX fell about 9% this week

The Van Eck Gold Miners ETF (GDX) traded flat at about $25.8, with a weekly decline of almost 9%.

UK retail sales rose 0.3% month-on-month, a big leap from last month’s 0.2% decline, which was also the consensus target for this month.

UK’s Gfk Consumer Confidence index for August was also out, falling to a new record low, at about -44, down from -41 in the previous month, even worse than the consensus target of -42.

Is the copper bear market rally already over?