The Indian rupee (INR) has strengthened after hitting an all-time low against the greenback in mid-October, trading at 81.3 per US dollar (USD) at the end of November, the highest in two weeks, as stronger-than-expected growth data gave further leeway for the country's central bank to continue its rate-hiking cycle with a more aggressive rate hike.

The Reserve Bank of India (RBI) raised the benchmark lending rate by 50 basis points on 30 September – the fourth consecutive increase since May – as major central banks across the world continue to battle high inflation. Since May, the RBI's rate-setting panel has raised the country's repo rate by 1.9% to 5.9%.

Here we look in more detail at what has been driving the rupee lower and where it may go next.

How has the Indian rupee performed so far in 2022?

The rupee started the year at 74.40 against the dollar and steadily weakened. The USD/INR pair climbed higher across the year, reaching its first all-time high of 80.20 on 14 July. The USD/INR price then eased lower to 78.13 before another ascent to retest the all-time high once more in August.

By October, the rupee weakened in the face of tightening monetary policy in the US, coming in at a dramatic all-time low (82.77) against the dollar. That being said, the rupee’s 8.5% decline against the greenback since January matches up with the weakness experienced by most dollar-paired currencies.

“Why is the dollar appreciating? Combination of i) flight to safety, where the US is considered a safe destination by investors; ii) home bias, with the US being home for the majority of investors; and iii) dollar yields are rising and are expected to rise more because of monetary tightening by the Federal Reserve, the central bank of the US.”

“While the rupee has depreciated 8% year-to-date, the dollar index has appreciated 18.8% over the same period,” the former CEA added.

Anuj Choudhary, a research analyst at BNP Paribas, told the Times of India: “We expect rupee to trade on a negative note as deteriorating global risk sentiments may put downside pressure on rupee. Weak global markets may lead safe haven flows towards US dollar. However, sharp fall in crude oil prices may prevent sharp downside in rupee.”

What is the Indian rupee?

The Indian rupee is the official currency of India and is issued by the Reserve Bank of India (RBI). In 1947 it replaced the currencies of the previously autonomous states, becoming the national currency.

The rupee was pegged to the pound due to its historic links to Britain. Along with the decline in the share of trade with Britain and increased diversification of India’s international transactions, the rupee was delinked from the pound in September 1975. The currency is now a free-floated exchange rate influenced by supply and demand.

The RBI’s exchange rate policy ensures orderly conditions in the foreign exchange market. Therefore, it monitors movements in the currency and financial markets closely. When necessary, it intervenes in buying or selling foreign currency to support the rupee’s price stability.

What moves the rupee?

There is no single factor that drives the value of the Indian rupee, but several factors combine to influence its movement. These include:

The RBI will look at macroeconomic data points to decide the appropriate monetary policy action. High inflation, strong growth and an improving labour market encourage the RBI to hike interest rates. Meanwhile, a contracting economy, low or falling inflation, and a deteriorating jobs market could prompt the RBI to cut interest rates.

Substantial foreign exchange reserves act as a buffer against factors that could negatively impact the country’s economy. Reserves help maintain a steady exchange rate through buying and selling, depending on whether the central bank is looking to raise or lower the exchange rate. The RBI intervenes in the market to steady the USD/INR exchange rate.

India imports around 80% of its oil requirements, which means the economy is particularly vulnerable to fluctuations in oil prices. Rising oil prices are bad news for the net importer of oil, widening the trade deficit and weighing on the value of the rupee. Meanwhile, falling oil prices are considered beneficial for India’s economy.

When the US dollar index (DXY), which measures the USD against a basket of major peers, rises, the INR will often fall in value. The chart below highlights this relationship. 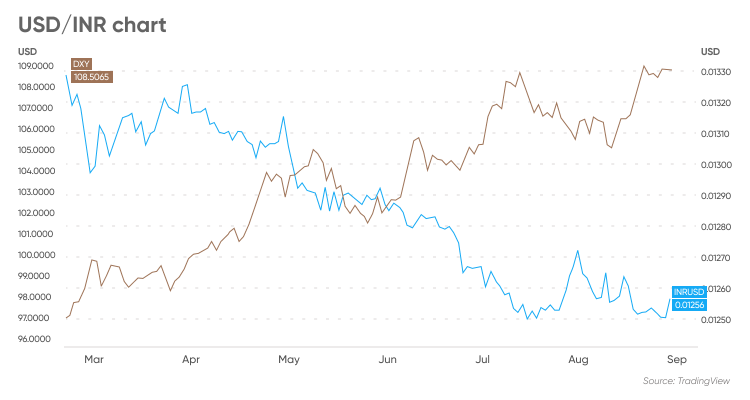 Historical moves in the Indian rupee

The Indian rupee was trading at 43.35 at the start of the year 2000. It has lost around 84% of its value against the dollar in the past 22 years. That said, the notable devaluation of the rupee actually started in 2011.

The INR has consistently hit record lows this year against the dollar. The currency battled against the USD’s strength as the value of the world’s reserve currency rose to a 20-year high of 112 earlier this year, but has since subsided. The DXY, which measures the value of the USD against a basket of major peers, has rapidly risen as the market priced in a more hawkish US Federal Reserve (Fed).

The Fed’s inflation gauge, the core personal consumption expenditures price index, slowed for the fourth month in a row to 7.7% in October of 2022 – the lowest since January – and below market forecasts of 8%. The latest reading compares with 8.2% in September.

The RBI has intervened on several occasions, selling the rupee to defend the psychological level of 80.00 against the USD, and raising the RBI’s bank rate by 50 basis points in its most recent decision.

While foreign investor outflows have dominated across the year, the beginning of Q3 2022 showed more promise. Despite volatility in the INR, August marked the first month when foreign investors were net buyers of government debt.

The Indian economy remains strong, expanding by 6.3% in the third quarter, slightly higher than market expectations of 6.2%, and extending the country’s growth momentum to eight straight quarters.

Broadly speaking, growth in Europe has been stifled by Russia’s invasion of Ukraine and rising energy prices, while lockdowns in China have seriously limited the nation’s manufacturing capabilities.

The Indian central bank raised interest rates in May for the first time in two years, hiking the rate by 40 basis points to 4.4%. Since then, the RBI has raised rates by a further 100 basis points, and again on 30 September by 50 basis points. The current bank rate is 5.9%.

According to a statement made by Governor Shaktikanta Das: “Monetary policy had moved from neutral to accommodative stance in June 2019. At that time, the repo rate was 5.75%; headline CPI inflation was hovering around 3%.”

“The average CPI in India for FY24 is expected in the band of 5.00-5.25 percent. We expect 35 basis points hike in the December policy, along with change in monetary policy stance from ‘withdrawal of accommodation’ to ‘neutral’ indicating further action to be data dependent. Post this hike, the overnight rates in India would have increased by approx. 300 basis points during CY22,” Deepak Agarwal, fund manager at Kotak Mahindra Asset Management Co., told Forbes India.

Should the RBI look to ease its pace of tightening rates while the Fed remains aggressive, the USD/INR could rise further on central bank divergence.

Separately, foreign exchange reserves have been declining slowly since September 2021. However, India’s import coverage of eight months is well ahead of the three-year import coverage benchmark. 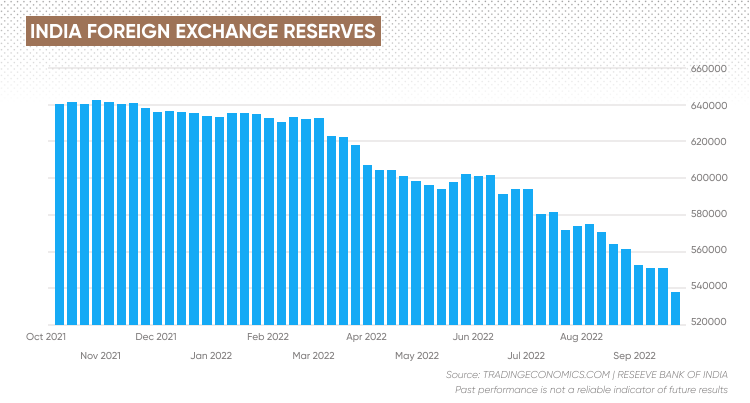 The latest USD/INR forecast for 2023 and beyond

Algorithm-based forecaster WalletInvestor predicted that the rupee could weaken from its current level over the course of the following year. The site’s USD/INR forecast predicted that the pair would end 2023 at 83.680. Over the longer term, WalletInvestor’s USD/INR forecast for 2025 saw the rupee further weakening against the dollar, rising to 88.276 by the end of the year.

Meanwhile, algorithmic forecaster AI Pickup’s USD/INR prediction for 2027 saw the rupee strengthen to 74.97. Interestingly, the website said that after hitting a record low of 84.35 in 2024, the rupee could stage a recovery. The service’s USD/INR forecast for 2030 was 72.6.

It is important to remember that analysts’ and algorithm-based Indian rupee forecasts can be wrong. Always conduct your own due diligence before trading, looking at the latest news, technical and fundamental analysis, and analyst commentary.

Bear in mind that past performance does not guarantee future returns, and never trade any money that you cannot afford to lose.

USD/INR forecast: How low will the rupee fall against the dollar after breaching an all-time low of 83?

Dollar gains after non-farm payrolls: Is USD on path for end-of-year rally?

USD/RUB forecast: Will the Russian ruble continue its outperformance against the dollar?

AUD/USD forecast: Will the Aussie come out of its slump?