Forex news: euro falls below parity with the franc; hawks circle in Sintra

Today's market focus is on the euro-Swiss franc (EUR/CHF) exchange rate, which has returned to parity for the second time this year since early March. Meanwhile, senior central bankers meeting in Sintra for the European Central Bank symposium are becoming increasingly hawkish about the course of interest-rate hikes.

The eurozone's deteriorating economic outlook has continued to drive EUR/CHF down, while the market appears to be giving greater credit to the Swiss National Bank's (SNB) capacity to keep raising interest rates to bring inflation under control.

Yesterday, GfK's German consumer confidence index forecast a slide from -26.0 to -27.4 in July, a new all-time low, while this morning German inflation in June came in at 7.6 percent year on year (y/y), but to a smaller degree than expected (8 percent y/y).

The euro's bearish phase versus the franc, on the other hand, was prompted by the SNB's unexpected half-point hike in interest rates on June 14, when the market expected rates to remain steady. It was the SNB's first rate increase since 2007, after the rate had been held at a record low of -0.75 percent since 2015, and it signalled a substantial shift in monetary policy. It also warned the market that the SNB is ahead of the ECB in the rate hike cycle.

As a result, the franc was the best-performing major currency in June, rising against the US dollar as well (USD/CHF).

Swiss franc (CHF) has been the best performing this month

Technically speaking, the EUR/CHF pair entered oversold territory as the 14-day relative strength index ( RSI ) dropped below the 30 level mark. The MACD indicator is not signalling a bottoming out.

This fresh drop to parity level in EUR/CHF does neither reflect a bullish divergence , as the RSI is updating new lows simultaneously with prices, nor a bullish reversal after a double bottom , since the neckline technical figure is absent in the chart. 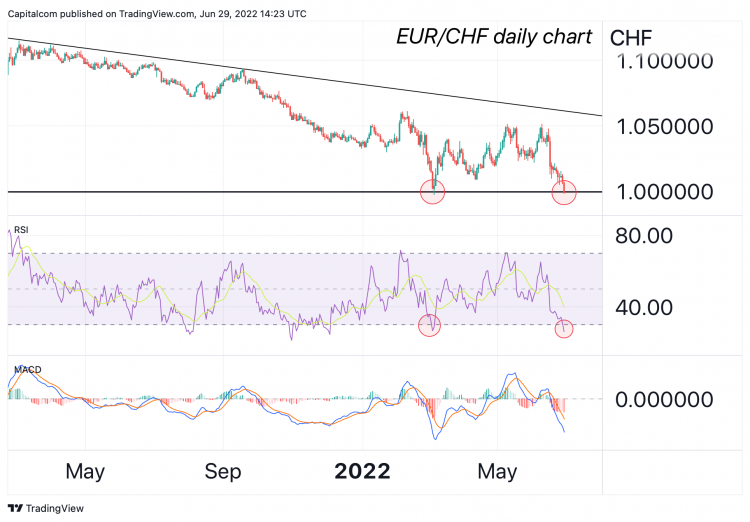 Today at the ECB Central Banking Forum in Sintra, the three top central bankers—Jerome Powell of the Fed, Andrew Bailey of the Bank of England, and Christine Lagarde of the ECB— signalled hawkish remarks that suggest a more aggressive approach to raising interest rates.

Powell claims that the Fed "will not allow a shift from a low-inflation environment to a high-inflation one" and that the "clock is ticking" for the Fed to reduce inflation. In terms of the economic picture, he was a little hazy, stating that the US economy is "well positioned" to withstand tighter monetary policy, but that there is no assurance of a soft landing and that demand will likely shrink quickly.

He also stated that a stronger dollar operates as a disinflationary force at the margins.

Andrew Bailey stated that if inflation persists, the Bank of England will have to intervene more firmly, even though the economy is clearly weakening.

Christine Lagarde focused on the anti-fragmentation instrument that would be unveiled at the July meeting to keep eurozone bond spreads in check. The ECB's president also stated that a low-inflationary environment is unlikely to return. 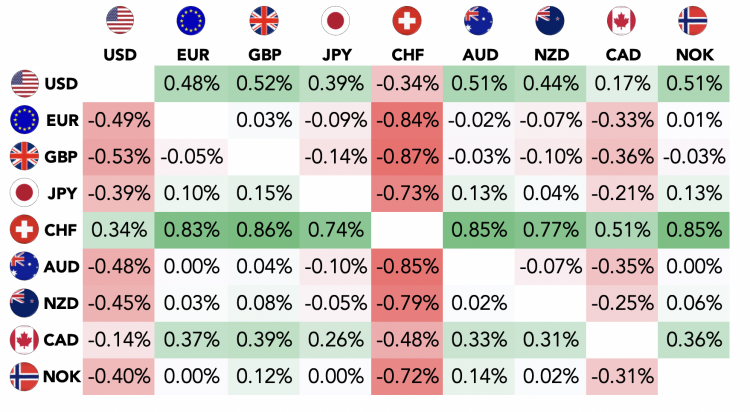 Euro (EUR) trading news: The euro weakened to 1.047 dollars today (-0.5%), dragged down by lower than expected inflation figures in Germany, which may indicate that a demand slowdown is already ongoing in the euro area. The ECB hawks' remarks reinforcing the likelihood of a 50 basis point raise in September did not assist much the single currency. Below this level, support is at 1.045 (June 17), then 1.04, and finally at the year's lows at 1.036.

British pound (GBP) trading news: The pound is also having a weak session, pressured down by increased fears of a European recession, which tend to keep risk sentiment pretty low at this stage. GBP/USD fell by 0.5% on the day, reaching an intraday low at 1.2105 (June 16's lows) before trading at 1.212 as of writing.

Japanese yen (JPY) trading news: The Japanese yen fell to fresh 23-year lows versus the dollar amid the BoJ's silence and Powell's hawkish rhetoric, showing that monetary policy divergences between the Fed and the BoJ remain significant. USD/JPY hit an intraday high at 137 levels (October's 1998), before retracing to 136.5.