As the popularity of electric vehicles rise, so does the demand for raw materials needed to power the batteries. At the same time, lithium and copper – the two vital metals in the batteries – are experiencing dwindling supplies amid that increased demand.

Mines are operating at full capacity, yet are struggling to meet the needs of this rapidly growing automotive sector.

The boom is being driven by American consumers, who are increasingly choosing environmentally friendly EVs over traditional gas-powered internal combustion engines. During the first 10 months of 2021, EV purchases in the US jumped 94% from 2020 to 378,466 units sold, according to Experian. That number is expected to grow in the coming years, as government incentives – from tax breaks to rebates – make buying an EV more attractive.

The EV batteries contain several raw metals, such as cobalt, graphite and nickel. But the two main metals are lithium and copper. But as the commodity producers struggle, their costs will be passed on to the EV buyers. 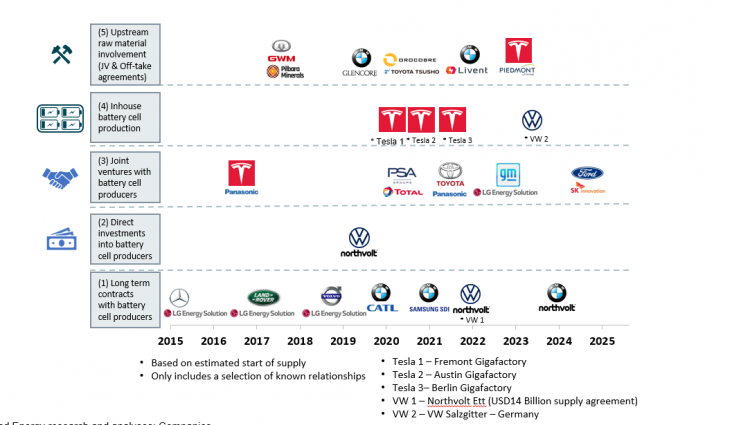 Known as white gold, battery-grade lithium’s price is projected to increase 50% in the next year. Prices are already trading at a record level, at more than $50,000 an Imperial ton, in large part due to lithium iron phosphate (LFP) batteries used in EVs.

Susan Zou, Rystad Energy senior analyst of Battery Materials, said supplies of lithium salt, a key ingredient in LFP, will remain tight during the first six months of this year, as a result of mining lags in South America and China.

“Producers appear reluctant to sell significant volumes on the spot market, as supply constraints and the ongoing logistical issues caused by the pandemic create bottlenecks in the trading market for lithium salts,” she said.

A recent production slowdown of China’s lithium salts has made the nation leery of selling on the spot market, Zou said.

In South America, Argentina, Bolivia and Chile – known as the Lithium Triangle – have entered into a number of long-term contracts over the last few years to provide the metal, making the countries leery of allocating volumes. However, the Latin American countries have signalled they are willing to boost production this year, while facing continuing logistical issues, she said.

“This supply tightness for lithium salts, combined with the optimistic demand outlook for LFP batteries that typically feed on lithium carbonate, is expected to keep lithium carbonate prices high and support a notable premium over the price for lithium hydroxide in early 2022,” Zou said, adding Rystad estimates this premium will slowly narrow after seasonal supply bottlenecks ease in China and the ramp-up plan in South America comes about.

Lithium’s contract prices are the Changzhou Zhonglianjin exchange platform’s newest driver for the nation’s lithium market. The Chinese exchange launched in the summer of 2021.

Zou said in the last two months, contracts “have driven sentiment in the markets to some extent,” giving a significant boost to lithium’s price momentum. Additionally, she said, it stopped trader-suppliers – who earlier this year tried to destock – from selling for now.

Within eight years, the world-wide demand for copper will outstrip supply by more than six million Imperial tons, according to Ley, adding the metal is a vital material in EVs and consumer electronics.

“A deficit of this magnitude would have wide-reaching ramifications for the energy transition as there is currently no substitute for copper in electrical applications,” Ley warned, adding demand is expected to increase by 16% by the decade’s end, but supply projections are 12% below the 2021 level.

Investment in copper mining is risky as current operations are near peak capacity due to ore quality and reserves exhaustion, he said, exerting upward pressure on production costs and emissions. However, copper prices are currently high, which could encourage investors to accept a greater level of risk.

“Lacklustre investments in copper mining are stumping supply, as the pandemic-driven market instability encourages investors to hold on to their capital. As the energy transition continues at pace and EV adoption grows in populous nations like China and India, the copper mining industry requires significant investment to keep up with demand,” said Ley.

Despite a growing demand for renewables and EVs, according to Ley, the outlook for copper investments is bleak for future supply.

Under Peruvian law, all mines have an expected closure date, although those dates can be modified if regulators allow. However, many mining companies have existing contracts running for several more years.

Another Peruvian copper mine, La Bambas – producer of about 2% of the world’s supply – will shut down due to logistic problems.

Currently, raw materials account for just under 30% of the batteries’ cost.

“With these raw material costs all having risen… we have their share now at around 40% of costs, and we have total theoretical battery costs actually increasing significantly over this period,” Ley said. “But I do stress theoretical here, as firstly we think a lot of raw materials will be procured on contract basis, with our prices being spot basis, so it’s doubtful that these full costs would be realistically absorbed.”

Ley said EV makers continue to improve the efficiency of the cars and will place pressure to push prices down.

The US currently has one operational lithium producing mine, located in southern Nevada, producing less than 2% of the world’s needs.

But an American state along a blighted section of the California/Mexico border could change that.

In an area known as the Imperial Valley lies the Salton Sea. The California Energy Commission estimates that under the Salton Sea is the world’s largest deposit of lithium. So much so, the Salton Sea could produce 600,000 Imperial tons of lithium annually, far more than the global demand, and an estimated worth of $7.2bn.

A pair of decades-old geothermal plants have plans to switch to lithium production in the valley.

“Lithium was not worth much ten years ago, so the economics of lithium has changed the game,” Eric Spomer, CEO of Energysource told CBS News.