While investors in the blank-cheque firm merging with Buzzfeed approved the business combination late Thursday, 94% of them decided to redeem their shares at $10 per share rather than stay invested in the combined entity.

SPAC 890 5th Avenue Partners stock fell as much as 14% when US trading began  Friday to as low as $8.50 per share, versus Thursday’s $9.91 closing share price. Eighth Avenue Partners trades over the Nasdaq exchange under the ticker “ENFA”.

Just under 80% of 809 5th Avenue Partners shareholders voted, with 98.2% of voting shareholders approving the merger. Of that total, however, just 6% opted to invest in the combined entity, according to records filed with the US Securities & Exchange Commission.

As a result, when factoring in the $150m in convertible private investment in public equity (PIPE) notes, Buzzfeed raised $166.0m in proceeds, instead of the $437.5m it expected.

The merger closes Friday and Buzzfeed is scheduled to begin trading Monday on the Nasdaq exchange under the ticker “BZFD”. At the $9.91 per share price of SPAC 890 5th Avenue Partners at the time of the vote, the new company is valued at roughly $1.5bn.

Buzzfeed’s planned acquisition of Complex Networks from Verizon Communications, including The Huffington Post and Tasty, also closes Friday. The Complex acquisition is funded by a combination of cash and equity totalling $300m.

The merger comes amid labour strife, as Buzzfeed is in contentious negotiations with the Buzzfeed News Union, a member of NewsGuild New York. Buzzfeed News staff unionised in February 2019 and have been in collective bargaining negotiations since.

“We've been bargaining our contract for almost 2 years, but BuzzFeed won't budge on critical issues like wages — all while preparing to go public and make executives even richer,” the Buzzfeed News Union said Thursday in a statement. “So (Thursday), we're walking out to send a reminder that there's no BuzzFeed News without us.” 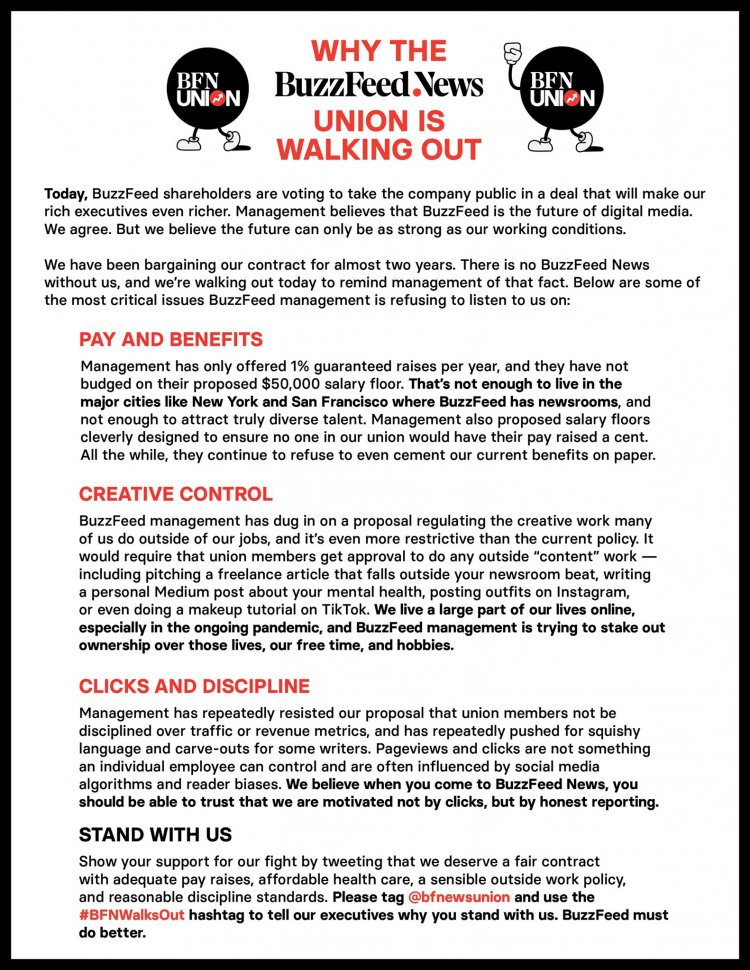 Where's the beef? Wendy’s serves up a 10% stock price surge for impatient investors

Can Smith & Nephew’s (SN.) share price rally as NHS gets back on its feet?

Johnson Matthey: What’s the next catalyst for JMAT share price – could it shock?