How has the pound been performing in 2022?

What has been driving the pound?

The British pound (GBP) has had a troubled start to the year, trading lower against major peers such as the US dollar (USD) and the euro (EUR). With inflation rising, growth slowing, and the Bank of England (BoE) seemingly a hike away from tipping the UK economy into recession, we look at what has been driving GBP and analysts’ GBP predictions for 2022 and beyond.

How has the pound been performing in 2022?

The pound has been trading lower versus most of its major peers across the year. The GBP/USD exchange rate, the most popular of the pound crosses, reached a high of 1.4245 in May last year and has been steadily falling since then.

What has been driving the pound?

The British pound has been under pressure amid growing concerns over the health of the UK economy as inflation continues to rise and growth stalls.

Economic growth in the UK has slowed considerably as the year has progressed. After solid growth in January and February, GDP contracted in March on a monthly basis by -0.1% and again in April by -0.3%.

With inflation rising and the cost-of-living crisis ramping up considerably over the last few months, growth is expected to slow further. The Organisation for Economic Co-operation and Development (OECD) warned that it expects the UK to experience the slowest growth of any major G7 economy. The BoE also slashed its growth forecasts for Britain, with a recession looking almost unavoidable.

Inflation was already high at the end of last year when the BoE started to raise interest rates. Following Russia’s invasion of Ukraine on 24 February, food and fuel prices started to rise. In April, the energy cap was lifted, meaning gas and electricity bills in the UK rose sharply for most households.

UK inflation, as measured by the Consumer Price Index (CPI), rose to 9% year-on-year (YoY) in April following the jump in energy prices, up from 7% the previous month. In May, the rise was expected to be less pronounced, rising to 9.1%. 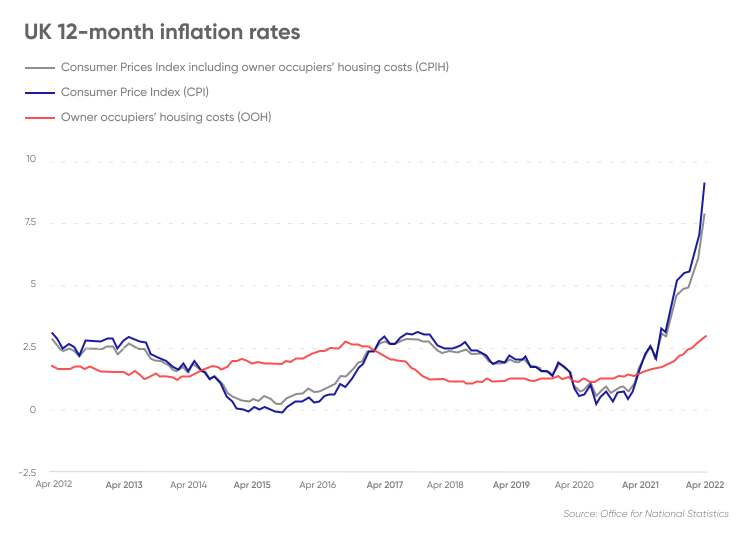 The Bank of England (BoE)

In the latest BoE monetary policy meeting on 16 June, the central bank raised interest rates by 25 basis points (bps), marking the fifth straight meeting of hikes. This took the benchmark lending rate to 1.25%, a 13-year high.

The BoE also warned inflation was expected to reach 11% and hinted that a larger rate hike could be on the table at the next meeting. However, with growth slowing and inflation set to rise further, the BoE could tip the UK economy into recession, the prospect of which is keeping demand for the pound weak compared to its major peers.

In addition to rising inflation and slowing growth, Brexit woes continue to drag on sentiment towards the pound. The less-friendly trade environment and occasional threats of a trade war as the UK looks to abandon parts of the Northern Ireland protocol show no signs of easing.

The British pound has been falling steadily lower versus the US dollar, briefly spiking below 1.20 before recovering to 1.2247 at the time of writing (22 June). Weakness in the pair is due to the growth differential between the two economies, expectations of a more hawkish US Federal Reserve (Fed) compared to the BoE. The USD also benefits from safe-haven flows at a time when global recession fears are driving the markets. 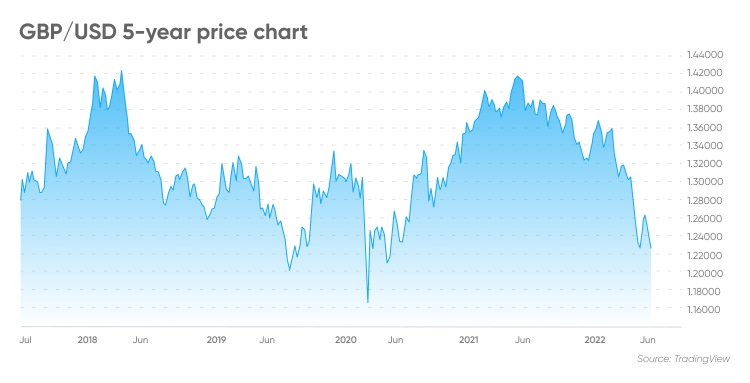 The EUR/GBP pair has been steadily climbing higher over the past two months, rising from 0.8250 on April 14 to an 18-month high of 0.8720 on June 15, as the pound weakened and the euro strengthened. While both the eurozone and British economies are vulnerable amid the fallout from the Russia-Ukraine war, the European Central Bank (ECB) is only due to start hiking interest rates in July. Meanwhile, the BoE may be forced to slow the pace of raising interest rates if growth continues to contract. 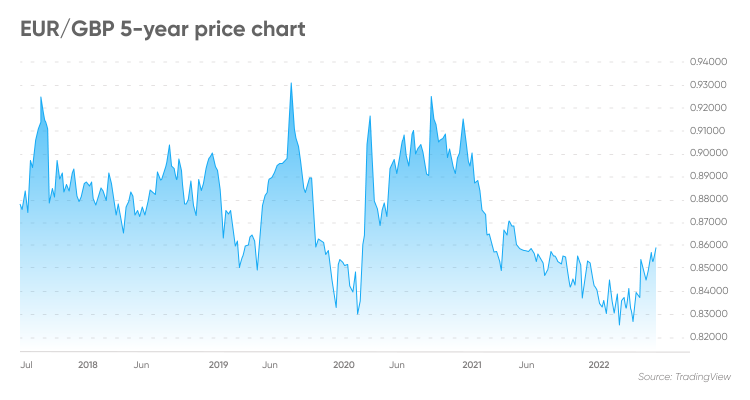 Analysts at Danske Bank, in their GBP forecast, considered that the BoE was not going to hike rates as much as is priced in. As a result they expected GBP weakness in the near term. They projected a slight upside risk to EUR/GBP over the coming months, saying that they still target 0.86 in three months.

Analysts at PNB Paribas were also less optimistic regarding the outlook for the pound. In their pound forecast, they considered that the BoE could hike rates by less than expected and revised their EUR GBP 12-month forecast to 0.84 up from 0.82. They said:

“We are more sceptical about the 12-month outlook for the British currency given the risk of recession in the UK. We change our 12-month target from 0.82 to 0.84. It is now aligned with our 3-month target.
“In May, inflation reached 9% YoY. Unemployment is only at 3.8% due to a shortage of workers. This creates second-round inflation effects that reinforce the income squeeze for households. UK companies are experiencing squeezed margins and weaker order books. The May Composite PMI continues to suggest expansion with the latest index value at 51.8 but has fallen sharply (58.2 in April).
“Compared to other G7 countries, the British economy is expected to underperform…We could see less rates compared to previous expectations.”

Meanwhile, analysts at Citibank were only moderately bearish in their GBP forecast, noting:

“Sterling remains vulnerable, especially on non-USD crosses (the commodity bloc – AUD, NZD, CAD), and now EUR and CHF, even if the MPC decides to hike three more times as per the Citi calls (to a cash rate of 2%) – it is still closer to the end of its tightening cycle than almost all other G10 central banks.”

Across the medium-term analysts were moderately bearish on GBP against USD, EUR and the Australian dollar (AUD). They forecast that GBP/USD could fall to 1.20 over the coming 6 to 12 months.

Senior market analyst Fiona Cincotta was also bearish on the outlook for the pound. In her GBP prediction she told Capital.com:

“With rising inflation and stalling growth, the UK economy looks more stagflationary than most. The BoE will struggle to keep up with the hiking cycle of other central banks given that the UK economy is much closer to a recession. Meanwhile, by comparison, the ECB hasn’t even started to hike rates yet and the Fed is just kicking off the hiking cycle. 1.20 is a key level for GBP/USD which I expect to hold.”

Algorithm-based website Wallet Investor’s GBP forecast predicted the GBP/USD holding steady in the near term. As of 22 June, the service projected the pair could end 2022 at 1.2159, slightly below the level that it was trading at the time of writing. The service’s GBP forecast for 2025 was for GBP/USD to rise to 1.3073 by the end of the year.

When looking at any forecast for GBP, keep in mind analysts can and do get their predictions wrong. We recommend you always do your own research and consider the latest market trends and news, technical and fundamental analysis, and expert opinion before making any investment decisions. And never invest money you cannot afford to lose.

Capital.com GBP Forecast | Will GBP Go Up or Down?