Non-fungible tokens (NFTs) were an undisputed hit of 2021. Before then, few would guess that so many people would be willing to pay for an ownership of a jpeg. Yet, in January 2021, a virtual picture of Bored Ape Yacht Club NFT sold for $2.85m in ETH.

Online searches for NFTs in some regions surpassed those for “cryptocurrency” last year – you can have a look at how NFTs’ popularity developed over the year at Capital.com data journalism here.

But the fever has now cooled off, as online searches for ‘NFT’ have been on a gradual decline since the end of January, Google Trends show. 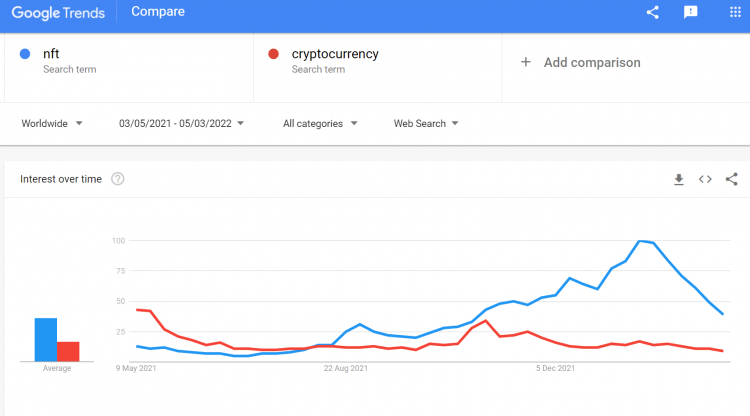 January's peak of interest in NFTs was followed by a sharp decline – Credit: TradingView

One explanation for this trend is that there have been a number of NFT controversies recently.

The NFT hype was heavily supported by celebrities and influencers, often with young audiences, which in some cases led to inexperienced investors burning their fingers.

In one recent high-profile case, in January 2022, a former adult entertainment actress, Lana Rhoades abandoned her NFT project after the $1.8m launch. The project – a collection of cartoonish pictures of Lana – was pitched as an investment opportunity to her fans, who total over 20 million across Rhoades’ social media accounts.

After the disappearance was publicised, Rhoades said that she could not ensure the NFTs’ price going up in value so she had dropped the project.

The world’s biggest NFT market, OpenSea, was recently targeted in a phishing attack, in which users lost some $1.7m.

The war in Ukraine has, however, sparked a number of NFT launches in recent weeks. Over $7m was raised by UkraineDAO (decentralised autonomous organisation) by selling NFTs of the Ukrainian flag. Ukraine’s government got inspired by the move and said it would sell NFTs to raise funds for the military.

What is your sentiment on BCH/USD?

Give BCH/USD a try

Does the decline signify danger for the sector?

Jakub Chmielniak, co-founder of the NFT utility platform Fanadise.com says that the latest numbers come after a bumper January in the NFT sector.

“One explanation for the spike and drop in interest recently was that in January, we saw an absolute deluge of new NFT projects, with many fundraises covered by mainstream media outlets,” he says.

“Social media platforms like Instagram were also highly utilised to promote NFTs. Right now, we are back in a period of market consolidation with founders focused on the fundamental, but not particularly newsworthy business of delivering outstanding results for their projects.”

Top 5 NFTs: What are the top tokens by market cap?