AUD/SGD forecast: Can the Aussie move back to parity?

The Australian dollar (AUD) has been attempting to regain ground against the Singapore dollar (SGD) after sliding below parity earlier this year.

The SGD strengthened in July as the Monetary Authority of Singapore (MAS) adjusted the exchange rate against a basket of currencies in response to rising inflation.

The AUD/SGD exchange rate fell to its lowest level since March 2020. But the Australian dollar has since edged up, supported by expectations of stronger fundamentals later in the year.

What drives the value of the Australian dollar against the Singapore dollar? How do analysts expect the currencies to trade in the future?

In this article, we look at the latest predictions for the AUD/SGD foreign exchange (forex) pair.

What drives the AUD/SGD exchange rate?

The AUD/SGD currency pair represents how many Singapore dollars – the quote currency – you can buy in exchange for one Australian dollar – the base currency.

The Australian dollar, known as the Aussie, is the world’s fifth most traded currency, even though the country's gross domestic product (GDP) is the 12th largest.

The Aussie dollar is often traded as a proxy for the Chinese economy, as China accounts for 36.5% of Australia’s exports. The Aussie is considered to be a commodity currency along with the New Zealand dollar and Canadian dollar. This is because the Australian mining industry accounts for an 11.5% share of the Australian economy and natural resources account for 68.7% of exports.

The Singapore dollar is also strongly influenced by commodity prices, as the city state’s economy is centred on intermediary trade, importing natural resources for refining before export. Singapore’s port is the world's second busiest on cargo tonnage. The city is a regional financial centre.

The MAS controls the value of the Singapore dollar by managing it in a floating band referred to as the Singapore Dollar Nominal Effective Exchange Rate (S$NEER). The S$NEER values the Singapore dollar against a basket of currencies from Singapore’s main trading partners and competitors to manage inflation from imports and maintain the competitiveness of its exports.

In addition to commodity prices, the value of the Australian and Singaporean dollars is influenced by a range of economic data from both countries, including GDP, trade data and employment, as well as monetary policy on interest rates and inflation. 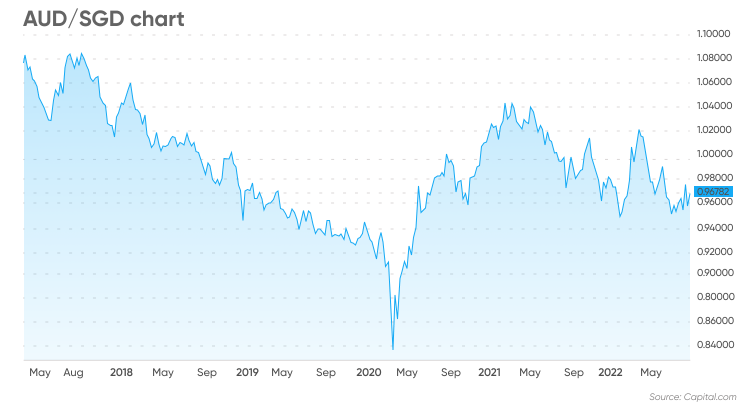 The Aussie was unable to hold on to parity against the Singapore dollar, and traded back down to 0.9727 by mid-August 2020. The pair traded at parity again in October 2021, but fell back in November and traded down to 0.9485 in January this year.

In April, the Australian dollar traded up to 1.0206 – its highest level since May 2021 – as commodity prices rallied in response to the Russian invasion of Ukraine. A retreat in May saw the pair trade down at 0.9583.

The Singapore dollar strengthened in mid-July, when the MAS adjusted the S$NEER in response to high inflation. The AUD/SGD pair traded down to 0.9469 – its lowest level since the March 2020 decline.

The Reserve Bank of Australia (RBA) raised interest rates by 50 basis points on 2 August and is expected to raise them again in its next meeting on 6 September, with inflation at its highest level since the early 1990s.

Concerns about high inflation rates in both Australia and Singapore are set to continue leading short-term monetary policy. While the RBA is expected to raise interest rates next month, which would support the value of the Aussie dollar, the MAS is expected to continue lifting the trading band for the Singapore dollar in an attempt to contain inflation.

Analysts at Australian bank Westpac noted that minutes from the RBA’s August meeting indicated that: “‘The Board expects to take further steps in the process of normalising monetary conditions over the months ahead, but it is not on a pre-set path… Much has been made of the term ‘pre-set path’ and we agree that it signals that at some point the Board will take a shift down in the pace of tightening from 50 basis points per meeting to 25 basis points. However, we believe that shift will not occur in September… Once having reached 2.35% in September it seems likely the Board will lower the pace to 25 basis points.”

The analysts wrote in a weekly client note on 22 August:

“We also think that this sequence of 25 basis point movements will not include a pause and will need to extend into 2023 with the final move in February. There is some evidence in the Minutes that the Board is becoming more concerned about the risks to inflation.”

What impact does the current environment have on the AUD/SGD forecast for the coming months?

AUD/SGD forecast: How will the pair trade amid persistent high inflation?

Analysts at US-based Citibank noted this week that there are “2 key pillars of support for AUD especially against its peers (NZD, CAD) and the euro bloc (EUR and GBP) – (1) a more resilient Australian growth outlook; and (2) China’s expected recovery later in H2.”

Antti Ilvonen, analyst at Denmark’s Danske Bank, is cautious on the outlook for the Australian dollar, noting: “Rising natural gas prices and high demand for LNG from Europe continue to support Australian terms-of-trade despite the weak growth in China and the consequently declining iron ore prices. While we expect the Reserve Bank of Australia to continue hiking rates after the 50bp hike in the August meeting, the weakening economic growth forces it to take a more meeting-by-meeting approach going forward.

“The recent easing in global financial conditions due to rising recession risks has provided moderate support for AUD. That being said, we believe the Fed will have to continue hiking rates aggressively, which will ultimately weigh on global growth. Environment of tightening financial conditions and slowing growth is negative for commodity currencies.”

Analysts at SEB Group noted that the Aussie dollar is “strongly driven by commodities & risk assets while the positive beta to global rates is fading… The Aussie is essentially a reflation proxy (expansion regime sweet spot) as it has a positive beta to commodities, equities & rates. The factor sensitivity to equities and commodities are running at historically high levels.

“Commodities and crude oil in particular have traded considerably worse than risk assets since June on the recession narrative, as equities enjoyed a substantial (bear market) rally. This bifurcation is starting to look stretched while the underlying bottom-up fundamentals are somewhat more supportive for commodities & energy going forward: Chinese data is poor but using the credit impulse as a (naïve) forward indicator we have probably seen the worst, and we are approaching the point where we could see more policy support.”

This could provide support for the Australian commodities sector and lift the value of the Aussie dollar.

Analysts at Malaysia-based Maybank were “mildly bearish” on the AUD/SGD pair, as of 19 August, with the bank’s technical analysis indicating support for the rate at 0.9530 and resistance up at 0.9780. The bank’s most recent monthly AUD/SGD forecast on 29 July showed the pair stabilising at 0.96 by the end of the third quarter, slipping to 0.95 by the end of the year but then trading back at 0.96 in the first half of 2023.

At the time of writing (25 August), the Australian dollar to Singapore dollar forecast from Trading Economics predicted that the Singapore dollar could strengthen more than the Aussie dollar over the medium term, with the pair trading at 0.94695 by the end of this quarter and at 0.91848 in one year, according to the data firm’s global macro models projections and analysts’ expectations.

When looking at any AUD/SGD forecast, it’s important to keep in mind that forex markets are highly volatile, making it difficult to make accurate long-term estimates. We recommend that you always do your own research. Look at the latest market trends, news, technical and fundamental analysis, and expert opinion before making any investment decision. Keep in mind that past performance is no guarantee of future returns. And never invest money that you cannot afford to lose.