3M to spin off healthcare business

Shares in US-based industrial-consumer conglomerate 3M (MMM) have been on the rise, gaining 18.10% over the past month, as the group recently reported better-than-expected second-quarter earnings and announced that it would spin off its multi-billion-dollar healthcare business.

Are you interested to learn more about the outlook for the group? Read this 3M stock analysis for the latest news and analysts’ 3M stock price forecasts before making your investment decision.

The subdued projections were blamed on a stronger US dollar and the “uncertain macroeconomic environment”.

What is your sentiment on MMM?

Give MMM a try

According to a report by The New York Times, on 27 January 2022 the US District Court for the Northern District of Florida ordered 3M to pay $110m in damages to two US army veterans.

The service members claimed they had hearing damage because the combat earplugs supplied by 3M were defective. Following the court judgement, there was a sell-off in 3M stocks, leading to a fall in the company’s share price.

3M’s stock price history showed that the group’s share prices were in downtrend for most of the second half of 2021 despite rising revenue last year. The falling 3M share price was partly driven by weaker market sentiment for the group, due to the ongoing lawsuits over its earplugs. 3M is still facing claims from over 290,000 former and current military members.

According to Reuters, “Out of the 16 trials to date involving 19 service members, plaintiffs have won in 10, with about $265m in combined awards to 13 plaintiffs.”

Aearo Technologies – the unit that manufactured the earplugs – has begun Chapter 11 proceedings in the Southern District of Indiana, 3M said on 26 July 2022.

The company has also committed $1bn to fund a trust aimed at resolving compensation-related claims, and will provide additional funding if required. 3M booked a pre-tax charge of $1.2bn in Q2 related to the expenses.

The bankruptcy manouevre has drawn criticism from the US military members suing the firm.

The action “is further proof that they value their profits and stock price more than the well-being of veterans who fought and served our country,” Bryan Aylstock, the court-appointed lead plaintiffs’ counsel in a lawsuit against 3M, said in a statement quoted by Bloomberg.

The market, however, reacted positively to the news, with shares climbing 5.7%.

“We view MMM's announcement to ring-fence its Combat Arms Earplugs litigation as a long-term positive (if contained to $1bn),” Citi Research analyst Andrew Kaplowitz said in a statement to Reuters.

3M to spin off healthcare business

On a separate note, 3M also announced that it would spin off its healthcare unit – responsible for close to 25% of the group’s $35.35bn in sales last year – into a separate public company.

The move means 3M will join a number of other manufacturers that intend to split their operations, simplify their businesses and boost investor returns. UK-based biotech giant GlaxoSmithKline (GSK) recently demerged from its consumer healthcare business, forming a new business called Haleon, which began trading on the London Stock Exchange (LSE) on Monday 18 July.

US industrial icon General Electric Co (GE) is also splitting its business into three separate parts. The multinational’s healthcare unit, GE Healthcare, will spin out of the broader company in 2023, followed by GE’s aviation and energy businesses in 2024, which will become GE Aerospace. Its power and renewables business will become GE Vernova (the name is a combination of ‘verde’ and ‘nova’, which mean ‘green’ in Spanish and ‘new’ in Latin, respectively).

According to a report from Bloomberg, “A spin-off could boost 3M’s sagging value, bolster its capital allocation strategy and give it a ‘liquidity war chest’.”

Bloomberg Intelligence analysts have suggested that the independent health business could be worth as much as $45bn.

However, some observers, including The Motley Fool's Lee Samaha, aren’t quite as optimistic regarding the move:

“The spin-off may well make sense, but it’s hard to argue that 3M’s healthcare business is being held back by the rest of 3M. In fact, it’s one of the problems, and despite concerted efforts over the years, its performance has been patchy at best. As such, 3M investors shouldn’t get too excited about the spin-off.
“A good comparison is made with GE Healthcare, a business GE is spinning off because it’s performing well and highly likely to unlock value. In contrast, 3M’s healthcare segment is actually one of its weak points that management has struggled to strengthen in recent years.”

3M will retain a stake of 19.9% in the new firm, which will focus on “wound care, oral care, healthcare IT, and biopharma filtration”. The conglomerate expects to complete the spin-off by the end of next year.

Last week, 3M unveiled details of its $5.3bn scheme to spin off its food safety business, giving some upside to a stock that has trailed the broader market since the start of the year.

Shareholders will have the option to convert 3M shares, which trade on the NYSE, into stakes in the merger with Nasdaq-traded Neogen (NEOG). Following the transaction, Neogen is to be controlled by 3M.

A separate company, SpinCo, will be created to facilitate the conversion of 3M shares into Neogen shares.

According to investment guide website The Motley Fool, there are three potential positive factors that could support 3M’s stock value in 2022.

The group is likely to face falling revenue from declining respirator sales in 2022 as Covid-19 infection rates subside, said Samaha.

In addition, 3M did not manage to “fully offset raw material cost increases to contribute to margin growth positively”.

The ongoing lawsuits regarding 3M’s Combat Arms earplugs sold to the US military will continue to weigh on investors’ sentiment.

“Industrial giant 3M is working through tough times and is probably most appropriate for more aggressive investors. Notably, it has been trying to reinvigorate growth at the same time that it has been facing some material legal headwinds. The dividend yield is a historically high 4.5%, suggesting that the stock is cheap.”
“But there are a lot of positives here, including that the company has a huge $70bn market cap and an investment-grade balance sheet. It should be able to handle the legal headwinds it is facing today. As for getting growth back on track, 3M has a long history of innovation behind it. Technology breakthroughs are lumpy, but eventually, the company is likely to find another hit that it can put to good use throughout its portfolio.
“Meanwhile, the company’s least profitable division had an operating margin of 17.1% in the first quarter of 2022, providing a strong foundation to support the company as it works toward better days.”

Brewer believes that the company is a “timely buy amid the market sell-off”. 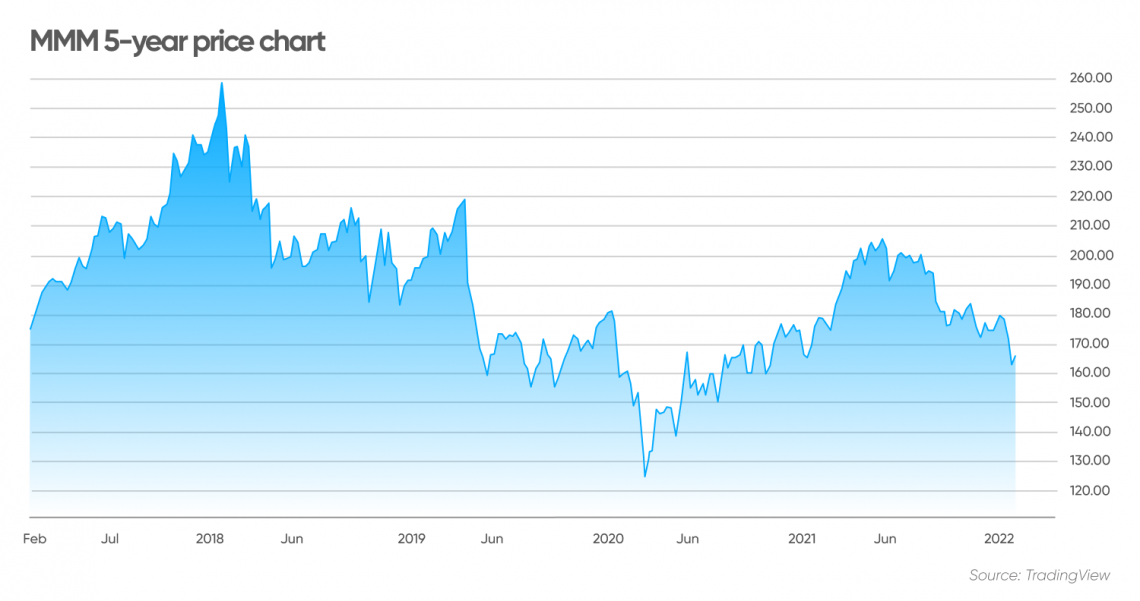 According to 3M stock predictions on MarketBeat, nine out of 14 Wall Street analysts surveyed had a ‘hold’ consensus rating for MMM stock while four maintained a ‘sell’ rating.

The average 12-month MMM stock price target was $152 with a 0.16% downside potential. In a positive scenario, analysts forecast the MMM share price could reach $205 while it could also fall to $118 in a negative scenario.

A number of banks updated their targets following 3M’s Q2 report, with Deutsche Bank slightly boosting its target from $146 to $148 on 27 July, which still indicated a potential upside of 5.15% on the report date.

Morgan Stanley's MMM stock forecast was bearish – the bank set a price target of $131 for the stock on 27 July, representing a potential downside of 5.83%.

Wells Fargo upped its price target from $137 to $144 following 3M's earnings report while maintaining an ‘equal weight’ rating on the stock.

Credit Suisse posted the most optimistic projection, raising its target price to $160 from $157 — a potential upside of 15.02%.

Forecast data provider AI Pickup’s MMM stock forecast was bullish for the upcoming years, as it expected the diversified manufacturing group’s share price to average $204.39 in 2022 — an upside of 34.25% from the close on 12 August.

When considering whether to invest in any company’s stock, you should always do your own research, considering the outlook and relevant market conditions. A number of factors dictate whether stock prices rise or fall, including the company’s fundamentals and broader macro-economic factors.

Remember that there are no guarantees and that markets are volatile. You should conduct your own analysis, taking in such things as the environment in which it trades and your risk tolerance, and never invest money that you cannot afford to lose.

Could under-pressure Unilever pull off a Haleon-like demerger?