Is the S&P 500 still in a bear market? Barely. Don’t call it a ‘new bull market’ until a 20%+ rally from the lows, and/or a flip of a key longer timeframe moving average. We’re not far away, although the China unrest has dampened the mood slightly over the weekend.

The US stock index is up by just over 15% since its 13 October low, having also flipped the 100 day moving average (dma) from resistance to support. The 200 dma is the next challenge to overcome, and lies just above market in the 4,060 zone. Adding to the evidence that this is a key technical zone is the 61.8% fib retracement of the swing from the 16 August high to the 13 October low at 4,012.

The confluence of technical factors could suggest that we’re in for more of a two-way battle in the near-term.

Fundamentally, those two swing points both marked key reversals in market sentiment. On 16 August, shockingly bad earnings data from Target & Lowe’s had bulls doubting the strength of the economy. On 26 August, Powell further put the boot in with his short, sharp speech at Jackson Hole: Higher for longer: The bearish path for stocks?

That presentation was simply titled Monetary Policy and Price Stability. Markets were left in no doubt that the Fed Chair wasn’t referring to the ‘price stability’ of the stock market, putting on his metaphorical Volcker mask as he delivered these words:

The successful Volcker disinflation in the early 1980s followed multiple failed attempts to lower inflation over the previous 15 years. A lengthy period of very restrictive monetary policy was ultimately needed to stem the high inflation and start the process of getting inflation down to the low and stable levels that were the norm until the spring of last year. Our aim is to avoid that outcome by acting with resolve now. These lessons are guiding us as we use our tools to bring inflation down. We are taking forceful and rapid steps to moderate demand so that it comes into better alignment with supply, and to keep inflation expectations anchored. We will keep at it until we are confident the job is done.

This speech, along with a jump in disappointing company earnings reports, were cited as the main factors in driving the stock index lower.

Until 13 October. The big US CPI miss. Excited commentators popped up everywhere: “Peak inflation confirmed”. “The Fed pivot”. “Bottom’s in”. The bearish narrative was exhausted. The bull story took over and the rally began.

The story isn’t entirely without merit either. Markets are forward looking, and US headline inflation has fallen from an annual rate of 9.1% to 7.7% in four months, by 0.5% in October alone, well below the estimate of 8% and the prior reading of 8.2%.

Since the peak, price pressures have weakened by 0.35% on average each month. At that pace, headline inflation could drop to around 3% in 12 months.

Inflation could prove transitory after all

At least at these high levels. The bigger questions are how long it will take to bring inflation back to the 2% target, and just how much pain central banks are prepared to inflict on the economy to achieve that goal.

The hiking path has been plain sailing for central banks so far. With inflation way above target, simply get rates up, and fast. Few can argue with the logic. A recession may be the price to pay. Without a downturn, inflation could prove sticky and longer-lasting, something policymakers are desperate to avoid.

Aiming for the Goldilocks scenario. Just enough tightening to slow the economy and bring inflation down, but not too much tightening that it sends the economy into a deep slump. Goldilocks is the soft landing. Chair Powell said that looks increasingly unlikely after the last FOMC meeting at the start of November.

This T&S Lombard chart is the perfect example of why the soft landing is so challenging: 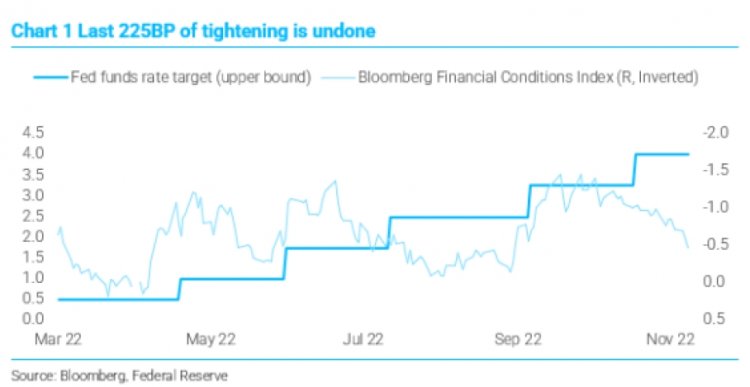 The minutes of the meeting hinted that the committee was happy with the progress so far:

“Financial conditions had tightened significantly in response to the Committee's policy actions, and their effects were clearly evident in the most interest rate-sensitive sectors of the economy, including residential investment and some components of business investment.”

The chart shows how markets have taken financial conditions in the opposite direction since. Not what the Fed wants to see.

Tighter financial conditions is a key transmission for the central bank. Most FCI’s (Financial Conditions Indices) have what many consider a design flaw. They’re too heavily weighted towards stock market performance.

Some would counter that the stock market performance is the best measure of ‘animal spirits’ and general risk appetite in the market. The Bloomberg FCI however, is more focused on spreads and volatility measures.

With the S&P 500 up 15% from the lows and Bloomberg FCI heading in the wrong direction, can Powell afford to be perceived as dovish when he speaks on Wednesday?

The speech is titled “on the Economic Outlook & Labour Market” and comes in the same week as two key labour market releases. The JOLTS data is due just a few hours before Powell's speech, and the non-farm payrolls report comes on Friday.

Numerous Fed officials have said that a better balance in the labour market is required to bring inflation down. Fewer job openings, and a lower quits rate in the JOLTS survey would be welcome news, especially if it comes alongside a strong NFP report.

Although, even this comes with a caveat. The headline report will need to be carefully examined. There are large discrepancies between the household and establishment surveys pointing in different directions.

The Fed’s tightening is definitely having an effect. The recent SLOOS (Senior Loan Officer Survey) showed that lending standards are tightening across the board:

The Fed’s challenge now is to ensure that financial conditions remain tight, even as market participants clamber over each other to pre-empt the turn in Fed policy.

Powell’s speech on Wednesday could be the perfect platform to push back on any thoughts of a premature pivot and reinforce the likelihood of a higher for longer scenario throughout 2023.

Any hint of dovishness from the Fed Chair, especially if accompanied by weaker employment data, could be taken as risk positive and lead to further easing of financial conditions. Which in turn could lead to greater inflation risks and the need for even more rate hikes further down the line.

In his own words: “Our aim is to avoid that outcome by acting with resolve now”. Let’s see if the Fed Chair can walk the hawk on Wednesday.

Can interest rates go down?