A sharpening Japanese yen, up 10% since October, may be a straggler behind GBP’s 16%-plus gains in the same period, but is JPY’s rally enough to lift it back on the ‘safe haven’ podium, alongside near neighbour CHF?

The yen rally is back – how long can it last?

USD/JPY sank again this morning, down 1.1% helped by signalling from Bank of Japan (BOJ) policy member Asahi Noguchi that the BOJ might wind in its stimulus marathon, under certain very tight conditions.

Should wages climb with trend inflation – think wage and services pressures – then the BOJ could respond. It’s still a big If.

"Trend inflation hasn't reached 2% yet. But if there's certainty that level will be met, it won't be surprising for the BOJ to shift monetary policy," Reuters reported Noguchi as saying at a news conference.

Capital fx market specialist Piero Cingari says stretched levels in the USD/JPY daily chart are clear enough. “The RSI is detecting oversold once more, and the 200-day moving average is only 1.5% below current levels.” 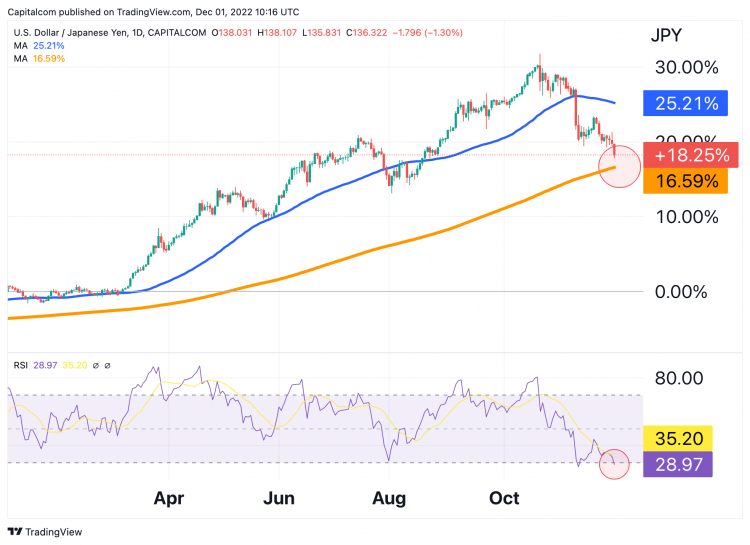 A positive dollar surprise – a good Non-farm payrolls or higher-than-expected CPI inflation on December 13 – “might halt the USD/JPY downturn and spark a reversal” however.

The yen’s significant strengthening is consistent with investor expectations for Fed rate rises in December. A recession-like scenario in 2023, Cingari adds, is priced by the Treasury yield curve: the 10-year vs 2-year spread remains sharply inverted (-70 basis points), at levels, in fact, last seen in 1981.

Hence the market’s caution: can the Fed’s really maintain higher rates for longer?

The yen has had extra support from investors fleeing riskier assets as China Covid policy anxiety rises. Yet more JPY caution hangs at the side: Japanese retail sales growth slumped from 4.8% to 4.3% in October.

Japan’s third-quarter GDP reading will be out next week but Iris Pang, ING chief economist, Greater China, expects no change from its initial forecast.

“We expect the -0.3% quarter-on-quarter seasonally-adjusted preliminary forecast to hold.”

Until economic growth starts to get going then tightening, or stimulus withdrawal, looks some time off. The yen has strengthened but so has the geopolitical risk and related newsflow.

For example, Japan's November manufacturing activity actually contracted for the first time in almost two years, according to the just-released au Jibun Bank Japan Manufacturing Purchasing Managers' Index, down to 49.0 in November from October's 50.7 final reading.

The yen’s fall still remains immense. Valued at around 104 to the dollar at the start of 2021, the BOJ’s options are still limited. In late September the Japanese government did intervene, buying yen for the first time in more than 20 years.

But the dollar too has wilted against a basket of other currencies and USD really does need strong NFP numbers – tomorrow – if the buck’s reverse is to be stalled.

Overnight dovish words also from the Fed’s Jerome Powell may mean new USD/JPY headwinds are here to stay – deep into 2023, possibly. For now, the rally's on.

EUR/USD 1.08915
Trade
+0.170%
USD/JPY 130.300
Trade
+0.390%
GBP/USD 1.23763
Trade
-0.150%
AUD/USD 0.70729
Trade
-0.550%
GBP/JPY 161.277
Trade
+0.210%
The difference between trading assets and CFDs
The main difference between CFD trading and trading assets, such as commodities and stocks, is that you don’t own the underlying asset when you trade on a CFD.
You can still benefit if the market moves in your favour, or make a loss if it moves against you. However, with traditional trading you enter a contract to exchange the legal ownership of the individual shares or the commodities for money, and you own this until you sell it again.
CFDs are leveraged products, which means that you only need to deposit a percentage of the full value of the CFD trade in order to open a position. But with traditional trading, you buy the assets for the full amount. In the UK, there is no stamp duty on CFD trading, but there is when you buy stocks, for example.
CFDs attract overnight costs to hold the trades (unless you use 1-1 leverage), which makes them more suited to short-term trading opportunities. Stocks and commodities are more normally bought and held for longer. You might also pay a broker commission or fees when buying and selling assets direct and you’d need somewhere to store them safely.
Capital Com is an execution-only service provider. The material provided on this website is for information purposes only and should not be understood as an investment advice. Any opinion that may be provided on this page does not constitute a recommendation by Capital Com or its agents. We do not make any representations or warranty on the accuracy or completeness of the information that is provided on this page. If you rely on the information on this page then you do so entirely on your own risk.