Is Russell 2000 a good investment? The bottom line

US Russell 2000 forecast: Will small cap stocks continue to fall?

In 2022, Russell 2000 Index (RTY), the US benchmark small cap index, was in a downward trend. The worldwide market downturn in the first three months of this year has erased the index’s roughly 15% gain in 2021.

Investors shifted their money to larger, more stable corporations amid the US Federal Reserve’s (Fed) rate hike, the broader crisis sparked by Russia's invasion of Ukraine, the projection of further rate hikes and persistent inflation.

As of 11 May, RTY 2000 has dropped more than 21% year-to-date, registering a steeper decline than large cap indexes as investors moved away from the typically riskier and more volatile small cap stocks.

In the coming months, the US economy is set to face headwinds from expected rising inflation and the possibility of more rate hikes. At the 4 May meeting, the Fed raised short-term interest rates by 0.50% and suggested additional rate increases for the next couple of meetings to bring down inflation to below its 2% goal.

Will the RTY 2000 continue its downtrend this year?  Here we take a look at what factors will influence a US Russell 2000 Index forecast in 2022.

The Russell 2000 Index measures the performance of 2,000 smaller companies that are part of the Russell 3000 Index, a larger index of 3,000 publicly traded companies that account for 98% of the US stock market.

Also referred to as Russell 2K, the index represents 10% of the total market capitalisation of the Russell 3000 Index. The securities in the Russell 2000, which was launched on 1 January 1984 by the Frank Russell Company, are based on their market cap and index membership.

The Russell 2000 is generally perceived as a barometer of the US economy due to its emphasis on smaller companies with a focus on the US market.

Value stocks in the Russell 2000 outperformed growth across industries in the first quarter of 2022, boosted by the surge in energy and real estate companies. For the past 12 months, the R2000 value has exceeded growth in most industries, with energy and staples leading the way.

Telecom, discretionary, tech and healthcare were among the worst performers across the indices in the quarter. In the small cap universe, healthcare was the biggest drag for the 12 months.

The month of June is critical for the Russell 2000 and other Russell indices because it is time to rebalance, adding new companies or removing some of the existing ones. The annual reconstitution of Russell indices starts in May by ranking all eligible stocks in the US by total market cap.

The process starts with a review of around 7,000 individual companies and removing stocks with a market cap of below $30m, or those with inadequate float or liquidity. The companies will be shortlisted to 4,000 stocks by total market cap.

“2022’s annual reconstitution event marks the third reconstitution since the Covid-19 pandemic began in early 2020, and it will be interesting to see what is in store for the US equity markets in the coming months as reflected in our annual rebalance,” said FTSE Russell’s Director of Product Management Catherine Yoshimoto.
Mutual fund managers and investors closely monitor the index's annual reconstitution to see which companies join and which leave. The process frequently generates speculation that could stir short-term demand.

Large-and small-cap US stocks enjoyed a stellar year in 2021 amid the persistent Covid-19 pandemic and mounting worries about the US economic recovery.  The Russell 1000 and RTY Index gained by 26.5% and 14.8%, respectively, according to the Russell US Indexes Spotlight Report for the fourth quarter 2021. 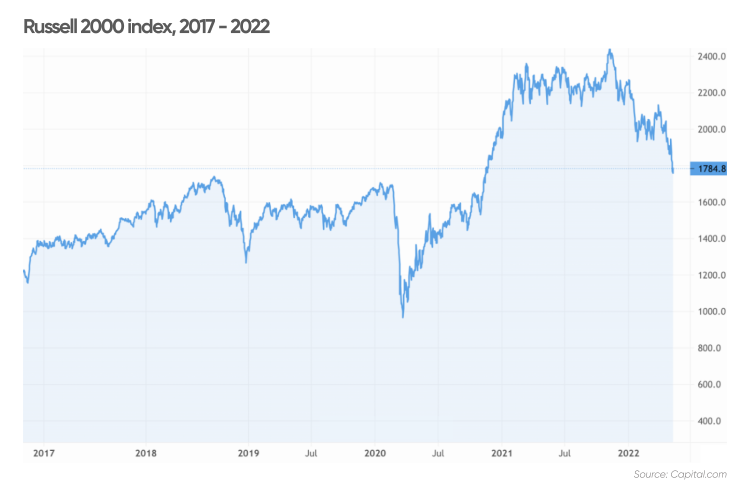 Entering 2022, the bearish tone set in as the Fed began its tightening cycle and Russia launched a military attack on Ukraine on 24 February. China’s recent massive lockdown to stem new Covid-19 outbreaks has fuelled concerns about the global economic slowdown. The index fell 21% year-to-date, as seen on the Russell 2000 chart above.

Technical analysis for the index at the time of writing (11 May) suggested that short-term sentiment was bearish. The index was trading below its 10 and 20-day moving averages, signifying a bear trend.

A relative strength index (RSI) reading of 31 was neutral, yet extremely close to the oversold territory. A reading of 30 or below could signal that the asset is becoming undervalued and a price reversal is likely.

What is your sentiment on RTY?

Give RTY a try

“The Russell 2000 index officially entered a bear market phase in May 2022.”
by Piero Cingari, Capital.com

“Obviously, this is a pattern we are seeing across many major indices, but the Russell has been weaker than the likes of the Nasdaq and the S&P500,” said David Jones, chief strategist at Capital.com.

“As the companies that make up this index are typically smaller than the likes of the Nasdaq and the S&P, investors may well be taking the view that the Russell companies are more vulnerable to a slowdown in the global economy, and the potential of a US recession.”

“The Russell 2000 index officially entered a bear market phase in May 2022, with a more than 20% drop from the highs recorded in November 2021,” said Capital.com’s Cingari.

“Along with the Nasdaq 100, the stock index that has suffered the most from the Federal Reserve’s increase in interest rates and the risks of a global economic slowdown, fuelled by the collapse of production in China due to the Covid-19 lockdowns and the decline in business and household confidence in Europe exacerbated by the conflict between Russia and Ukraine,” he added.

According to the FTSE Russell report, both large-and small-cap value stocks outperformed their growth counterparts in the first quarter 2022, owing to their higher weightings in Energy and other beneficiaries of the recent wider surge in commodity prices.

“The resulting spike in inflation expectations and long bond yields were headwinds for price,” the report added.

With a series of headwinds waiting in the coming months, will the Russell Index go up or down?

Capital.com’s Cingari said that for the second half of this year, small cap stocks are expected to see the risks of a slowdown in global and US growth and the reduction of market liquidity, because of the Fed’s quantitative tightening programme and rate hikes.

“However, excluding the 55% fall during the financial meltdown in 2009, the most significant drops for the Russell 2000 index have been in the order of 40%,” he said in a note.

“This suggests that if the Russell 2000 falls to 1,400 or 1,500 points, a 40% drawdown from November’s high,, it may signal a bottom at which buy-on-dip trading behaviour could be observed.”

Capital.com’s Jones said that the index’s next target could be 1,600, which is a level last seen in early November.

“For now at least it remains a market where the opportunities are to sell into strength rather than trying to find the bottom,” Jones added.

Economic data provider Trading Economics gave a moderate Russell 2000 prediction, expecting the index to trade at 1,795 by the end of this quarter and 1,699 in one year.

Note that price targets can be wrong. Forecasts shouldn’t be used as a substitute for your own research. Always conduct your own due diligence. And never invest or trade money you cannot afford to lose.

Is Russell 2000 a good investment? The bottom line

Small cap stocks are still facing headwinds in the coming months from risks of global and US economic slowdown as well as the Fed’s rate hikes.

Whether the Russell 2000 Index (RTY) is a suitable investment for you should depend on your own objectives. Remember, it’s important to reach your own conclusions about the index and its likelihood of achieving analysts’ targets.