Gold analysis: What’s next after the US CPI?

Did US inflation peak in April?

The dollar starves for yields

Inflation has proved to be a difficult beast to tame, as the rise in the US consumer price index (CPI) once again surprised market expectations by increasing 8.3% year-over-year in April, causing gold and the dollar to swing wildly between gains and losses during a session marked by high uncertainty.

Following the US CPI release, the US dollar currency-weighted index (DXY) surged to 103.9 before settling down to 103.6 at London market close. Gold sank to an intraday low of $1,834 per troy ounce, its lowest level since 11 February, before rebounding to $1,853.

Will the latest surprise in inflation rekindle the dollar's surge by increasing expectations for a harsher Federal Reserve?

Or are investors losing patience as a result of the challenges in easing inflation through interest rate increases alone, prompting a fresh wave of gold purchases?

Gold analysis: What’s next after the US CPI? 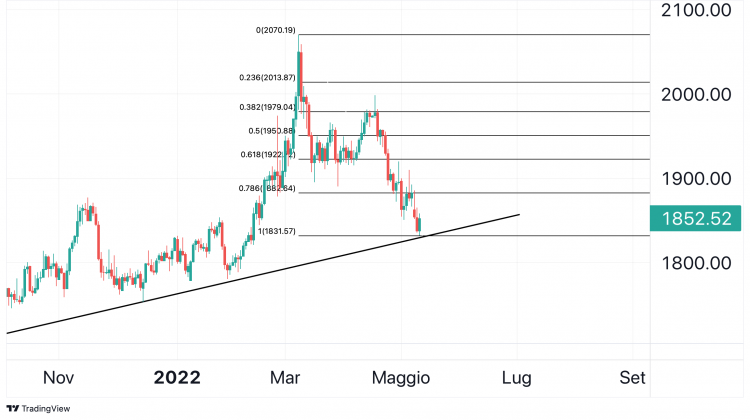 Gold has bounced off the major bullish trendline that began in May 2019, but it is still in corrective territory, having fallen more than 10% from its March highs.

The long-term bullish trend remains in place, but a breach of the psychological support level of $1,800 might change the picture.

If bears proceed unopposed below $1,800, a key milestone to monitor might be 1,680-1,690, which is near to a bear market value relative to March highs.

If the argument on the difficulty of limiting inflation with Federal Reserve rate rises prevails in the coming weeks, investors would flee to gold as a hedge against fresh inflationary threats and in anticipation of recessionary dangers.

Real estate share prices drop: How will the pain ease?

Did US inflation peak in April?

US inflation rate in the past 40 years: Will April 2022 be the peak? – Photo: Capital.com / Source: Tradingview

The US CPI index rose 8.3% in the 12 months ending in April. This was a smaller annual increase than the 8.5% seen in March, but it was still higher than what the market expected (8.1%).

Inflation is running fast among core basket components, which exclude food and energy, gaining 6.2%, which is again more than the market predicted. Shelters, which account for one-third of the entire CPI, experienced price hikes of 0.5% on the month and 5.1% year on year, reaching the highest level in 40 years.

Overall, inflation slightly cooled down from its peak of 8.5% in March, but that doesn’t mean that inflationary pressures are dissipating. The price increases in the consumer basket, especially in the service component, still remains extremely high and its decline could take way longer than forecasted.

The gap between US inflation and interest rates is extremely wide in a historical perspective – Photo: Capital.com / Source: Tradingview

As inflation lingers for longer than expected, the Federal Reserve could be forced to raise interest rates more aggressively, given that difference between the two variables is extremely wide in historical terms. As a result, the potential of a 75 basis point hike in June may return on the table, causing some headline risks for the market in the following weeks.

The recent surprise in US CPI inflation is also a cold shower for the stock market, since the risks for a lower liquidity from the Fed, sticky-high inflation, and increased borrowing costs may further damage investor sentiment and profit margins.

Higher interest rates might make the US dollar even more appealing to investors, particularly against the euro (EUR/USD) and the British pound (GBP/USD), which are dealing with a gloomy economic outlook.

The possibility of higher interest rates isn't good for gold because it raises the opportunity costs of investing in precious metal, which doesn't pay any interests or dividends.

However, if investors begin to believe that inflation cannot be controlled by rate rises but rather by the onset of a new recession, demand for gold would rise, as the bullion has traditionally showed positive returns during recessions.

It will be crucial to track the behaviour of 10-year US Treasury yield, which promptly recovered the 3% mark following the CPI release. Higher US yields tend to anticipate higher interest rates, thus strengthening the dollar while putting downward pressure on gold.

The dollar starves for yields

US dollar vs US 10-year yields – Photo: Capital.com / Source: Tradingview

Platinum vs Palladium: Which PGMs will rally in the green hydrogen boom?

Mayday! Hopes for a soft landing fade: markets in focus

Capital.com US inflation is hard to beat: Where are the dollar and gold headed?