USD: Unlike the reaction to the strong non-farm payrolls report, the USD has managed to hold onto its gains following the better-than-expected ISM services print. In turn, with the combination of strong NFP and now strong ISM services, this has seen the momentum in selling USD come to a halt as market participants reassess in the short run. However, the strong US data is unlikely to alter the outcome of the December meeting with the Fed set to raise rates at a slower pace of 50bps. The main focus will be on the dot plots. As it stands, the 2023 median projection is at 4.625%, in comparison to the current market pricing of 4.58%. Elsewhere, the recovery in the US dollar has been aided by the risk-off tone with downside momentum in the S&P 500 picking up as the index breaks below 4000. That being said, the move does to be thus far corrective, with the DXY yet to close above its 200DMA. 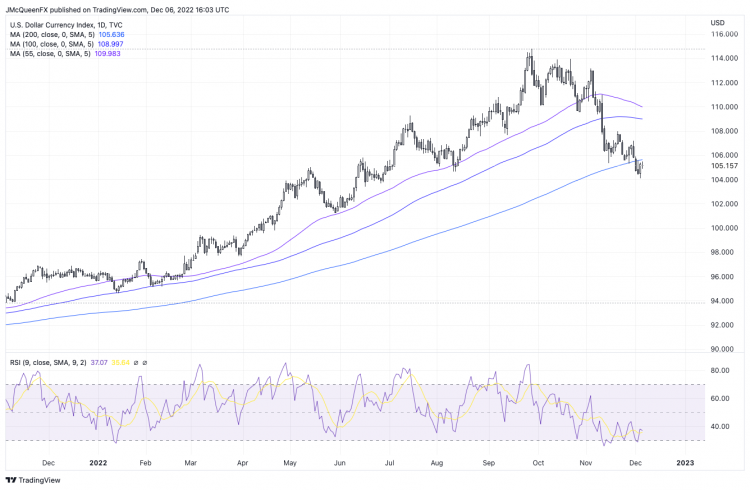 EUR: As mentioned above, the move in the USD appears to be corrective thus far with downside momentum exhausted. There is also a feeling that with the key risk events scheduled next week (US CPI/Fed/ECB Decision), major USD crosses may trade in rangebound fashion in the lead-up. With the single currency above the 200DMA, the topside focus remains on the 2020 low (1.0630), representing significant resistance, while support sits at 1.0365-95. 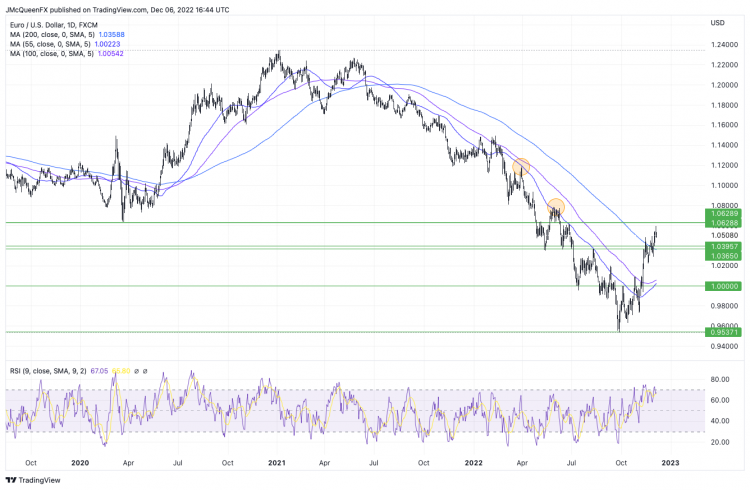 JPY: The currency that has the most substance for a USD bearish view is the Japanese Yen. Yields and oil are well off the highs which have underpinned the turnaround in the Yen. Alongside this, BoJ board members (Tamura) have kickstarted the conversation around reassessing the Bank of Japan’s current policy as inflation finally lands in Japan. This will be an important theme for Q1 2023, particularly with Governor Kuroda due to finish his term as BoJ Governor. At the same, with the Fed reserve slowing the pace of rate hikes, peak hawkishness from the Fed is behind us. As such, the bias for the Japanese Yen would be to fade dips. On the technical front, the upside has been capped at 137.50, which protects key resistance at 140.00-25, with support at the 200DMA thus far providing a floor. 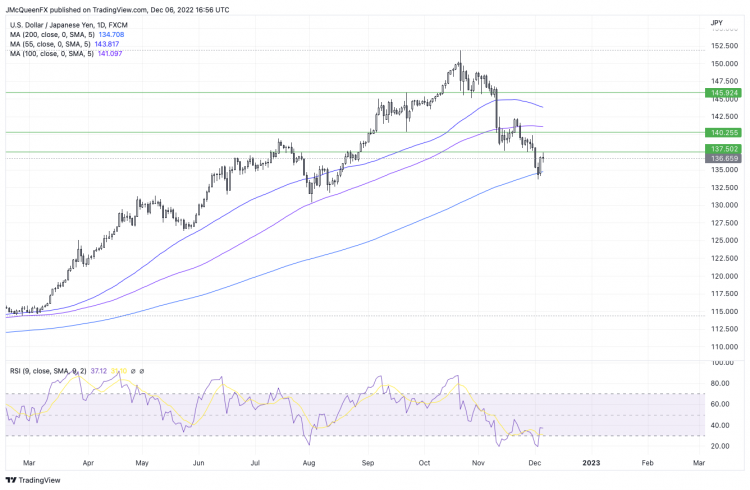 EUR/USD 1.08943
Trade
+0.250%
USD/JPY 130.042
Trade
+0.150%
GBP/USD 1.23819
Trade
-0.070%
AUD/USD 0.70764
Trade
-0.400%
GBP/JPY 161.012
Trade
+0.050%
The difference between trading assets and CFDs
The main difference between CFD trading and trading assets, such as commodities and stocks, is that you don’t own the underlying asset when you trade on a CFD.
You can still benefit if the market moves in your favour, or make a loss if it moves against you. However, with traditional trading you enter a contract to exchange the legal ownership of the individual shares or the commodities for money, and you own this until you sell it again.
CFDs are leveraged products, which means that you only need to deposit a percentage of the full value of the CFD trade in order to open a position. But with traditional trading, you buy the assets for the full amount. In the UK, there is no stamp duty on CFD trading, but there is when you buy stocks, for example.
CFDs attract overnight costs to hold the trades (unless you use 1-1 leverage), which makes them more suited to short-term trading opportunities. Stocks and commodities are more normally bought and held for longer. You might also pay a broker commission or fees when buying and selling assets direct and you’d need somewhere to store them safely.
Capital Com is an execution-only service provider. The material provided on this website is for information purposes only and should not be understood as an investment advice. Any opinion that may be provided on this page does not constitute a recommendation by Capital Com or its agents. We do not make any representations or warranty on the accuracy or completeness of the information that is provided on this page. If you rely on the information on this page then you do so entirely on your own risk.