Facebook was founded by Mark Zuckerberg, in 2004, along with fellow Harvard students and roommates: Eduardo Saverin, Andrew McCollum, Dustin Moskovitz and Chris Hughes. Facebook Inc is focused on building products that enable people to connect and share through computers, mobile devices and tablets. The company’s products include: Facebook, Instagram, Messenger, Oculus and WhatsApp. Facebook is a social network where people connect, share, communicate and discover with each other. Instagram allows individuals to share photos onto a feed for others to interact with. Facebook acquired the cross-platform messaging service, WhatsApp, in 2014.

Facebook shares are traded on the NASDAQ stock exchange between the hours of 09:30 and 16:00 (EST).

An individual has two options when trading Facebook shares. Firstly, they invest in Facebook shares on the exchanges where they are listed. For instance, you can take part in Facebook (FB) stock trading by buying stock on the NASDAQ stock exchange, so you actually own a share in the company. This can be considered a long-term investment, as the individual is usually waiting for the price to rise over time.

Alternatively, they can trade a contract for difference (CFD) on a particular stock, and speculate on the price difference of the underlying asset, without actually owning the asset. A CFD is a financial instrument typically between a broker and an investor, where one party agrees to pay the other the difference in the value of a security, between the opening and closing of the trade. You can either hold a long position (speculating that the price will rise) or a short position (speculating that the price will fall). This is considered a short-term investment or trade, as CFDs tend to be used within shorter timeframes.

Looking for a reliable CFD trading provider? If so, just spend 3 minutes of your time to sign up and start trading Facebook CFDs with Capital.com. Try our award-winning trading platform or download our mobile app, which will become your smart CFD trading assistant.

Trading the difference: When trading a Facebook CFD, you don’t buy the underlying asset itself, meaning you are not tied to it. You only speculate on the rise or fall of the Facebook stock price. CFD trading is nothing different from traditional trading in terms of strategies. A CFD investor can go short or long, set stop and limit losses and apply trading scenarios that align with their objectives. 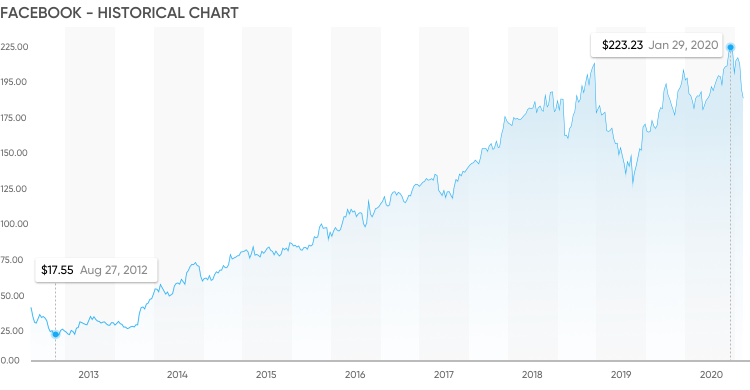 Facebook was founded in 2004 out of a Harvard dormitory room by Mark Zuckerberg and Eduardo Saverin. Membership of this social network was originally limited to Harvard students, but was then expanded to other colleges in the Boston area, the Ivy League, and gradually most universities in North America.

By September 2006, the membership was open to anyone with a valid email address, providing they were aged 13 or older. Soon after the site was launched, Zuckerberg was accused by fellow Harvard students, the Winklevoss brothers, of stealing their idea for the network. This allegation soon turned into a lawsuit for theft and fraud, which was settled in 2008 with a $65 million payment.

Co-founder Saverin sued Facebook over breach of fiduciary duty, when Zuckerberg diluted his holdings in the company, Saverin walked away with around 4-5% of the company.

In 2012, eight years after its creation, Facebook raised $15 billion in an Initial Public Offering (IPO) that valued the company at around $100 billion at that time.

In early 2018, Facebook was involved in a major political scandal, when it was revealed that Cambridge Analytica was harvesting the personal data of millions of Facebook users without their consent and using it for political purposes. Facebook’s share price fell, wiping $100 billion off its valuation, and CEO Zuckerberg agreed to testify in front of the US Congress. Since then, there have been increasing calls to regulate consumer rights in online media.

In 2019, Facebook keeps its leading position as one of the world’s most popular social networks. As of the end of 2018, it had more than 2.3 billion global active monthly users and 2.7 billion users across all its core products taken together.