Your guide to trading the EUR/JPY pair


Why is EUR/JPY important to traders?

One of the popular pairings across the worldwide foreign exchange market is EUR/JPY. It represents around 3% of all daily transactions and is actually the seventh most-traded currency pair on the market.

Investors and traders alike look to the euro/Japanese yen currency pair because high levels of volatility can provide plenty of trading opportunities.

There is, however, much more to the two currencies than meets the eye. In the following sections, we're going to explore the basics of this pairing, the major factors that can influence their rates, and how and why people choose to trade EUR/JPY using CFDs (contracts for difference) on forex.

Browse Capital.com to discover the largest selection of forex pairs.

Theoretically you can trade forex pairs 24/7, but there are prime times to trade the EUR/JPY when the currency pair is more volatile. The EUR/JPY is generally busy between 07:30 and 15:30 (GMT).

The basics of EUR JPY history

To assist newcomers to currency trading, we're going to explore the origins of both of these currencies and look at events in the past which have had an effect on the EUR/JPY price.

Most people have a basic understanding of the euro and how it came to be, so let's start off with the Japanese yen.

As the third most widely traded currency in the world, and the fourth reserve currency (behind the US dollar, the euro, and pound sterling), the yen is a very popular option for those who wish to begin trading.

The yen has a rich and complex history (compared to the relative infancy of the euro) and was officially adopted by the Meiji government in the year 1871. Since then it has grown in value considerably, mostly due to the strength of Japan’s industrial base.

Agricultural enterprises, advanced production of various products and food and a thriving technology industry have all helped to catapult the yen into being one of the most popular currencies to trade on the forex market.

The story of the euro is much simpler, but nonetheless an interesting look into a modern currency. The euro was only conceived in the 20th century, and physical notes and coins for the euro weren't released until the 90s. Now the euro is the currency for many European countries.

Although the euro is a relatively new currency, the euro has had its fair share of ups-and-downs. Political and economic events surrounding the turn of the century (such as the European recession) are just some of the reasons for euro volatility. 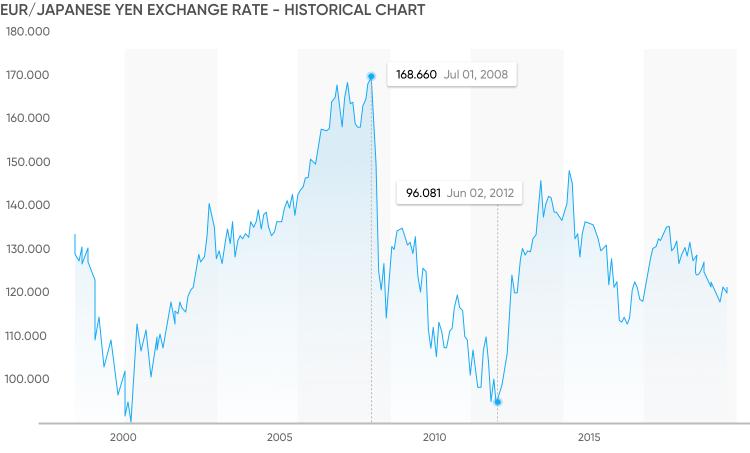 In the next two subsections, we're going to take a look at what major factors throughout both Europe and Japan affect the euro yen exchange rate. As with most regions, factors that can have knock-on effects are usually fairly broad and similar in nature. Japan, however, has some interesting key points that differ from the norm, which we'll explain in more detail.

Like most modern currencies, the major factors which influence the movement of euro prices are mainly economic, political, and financial. Many of the ways in which the euro is affected will already be familiar to people who have a basic knowledge of how traders try to determine which way prices of currencies like the euro will move.

For example, the monthly reports which are released by the European Central Bank (ECB) form the backbone of many traders' decisions regarding the euro. These reports can affect the fluctuation of euro rates – and keen investors and traders are quick to scour these details as soon as they are released in an effort to find out more about what direction the euro could be heading.

Economically, news releases surrounding employment can play a huge part in the oscillation of euro rates. These figures are freely available and provide a valuable insight into the health of Europe's economy and the direction in which euro prices could go.

The economy of Japan has a few more factors in play that can affect the rate of their currency. As always, the general health of the economy will play a massive part, with the high rate of import and export trading in Japan helping to boost or weigh on prices, depending on the state of the industry.

One of the influencing factors that you're less likely to find in other countries is, surprisingly,  the rate of natural disasters which occur in the region. Due to the small size of the country, events like natural disasters can affect the currency’s value immensely.

The government of Japan often utilises economic initiatives in an effort to bolster the economy. As a result, many traders and investors pay extremely close attention to interest rates and government interventions from financial institutions such as the Bank of Japan (BOJ). Another regular factor that traders watch out for is the details within data reports such as the Tankan Report, the Tokyo Area CPI and the aforementioned interest rate decisions of the BOJ. These help to determine various financial paths that the yen may follow.

How to trade EUR/JPY

As a way of purely speculative trading, CFDs can offer easy access to a wide range of markets. Investors and traders around the world like to deal with CFDs, as derivative trading of this kind means that owning the actual currencies themselves isn't a necessity. When trading, many like to use technical analysis and analyse the EUR/JPY chart, look at the relationship of the pairing, and speculate on the rise and fall of the market.

Why trade EUR/JPY CFD with Capital.com?

Advanced AI technology at its core: A Facebook-like news feed provides users with personalised and unique content depending on their preferences. If a trader makes decisions based on biases, the innovative News Feed offers a range of materials to put him back on the right track. The neural network analyses in-app behaviour and recommends videos, articles, news to polish your investment strategy.

Trading the difference: By trading CFDs on EUR/JPY, you speculate on the rise or fall of its price. CFDs trading is no different from traditional trading in terms of its associated strategies. A CFD trader can go short or long, set stop and limit losses and apply trading scenarios that align with his or her objectives.

All-round trading analysis: The browser-based platform allows traders to shape their own market analysis and forecasts with sleek technical indicators. For instance, a trader could choose to have EUR/JPY analysis and forecasts as a big part of their feed. Capital.com provides live market updates and various chart formats, available on desktop, iOS, and Android.