Top EV stocks for 2022: Investing in the auto transition

What are the top EV stocks to watch in this rapidly developing sector, and what factors are shaping their shares?

Key projections for the EV industry

“A fundamental shift in consumer perception of EVs happened in 2021 and the result is a large gap between supply and demand,” analysts at Deutsche Bank wrote in a note to clients on 14 December.

“Future EV winners are likely to be the manufacturers who have enough capacity and can secure enough supply to produce vehicles as fast as possible and offer them at the best cost.”

Japan-based Toyota, the world’s second largest carmaker by market cap, announced on 14 December that it’s preparing 16 Toyota and Lexus EV models, including one that it plans to launch next year.

Great Wall Motor, China’s largest manufacturer of sport-utility vehicles (SUVs), is set to export Ora, its new EV brand, to Europe in 2022. The company plans to have an annual EV production capacity of 450,000 vehicles a year.

Pure-play electric vehicle manufacturers are well placed to benefit from the EV boom, ahead of traditional automotive manufacturers that expect to ramp up their EV investment over the next few years.

US-based Tesla (TSLA) leads the global EV space, with a market share of 14.55% in the first half of 2021. Tesla’s Model 3 became the best-selling car in Europe in September, overtaking ICE models, according to automotive research firm JATO.

Europe overtook China in electric and plug-in hybrid vehicle sales in 2020, although China regained the top spot in the first half of 2021, according to data from EV Volumes. 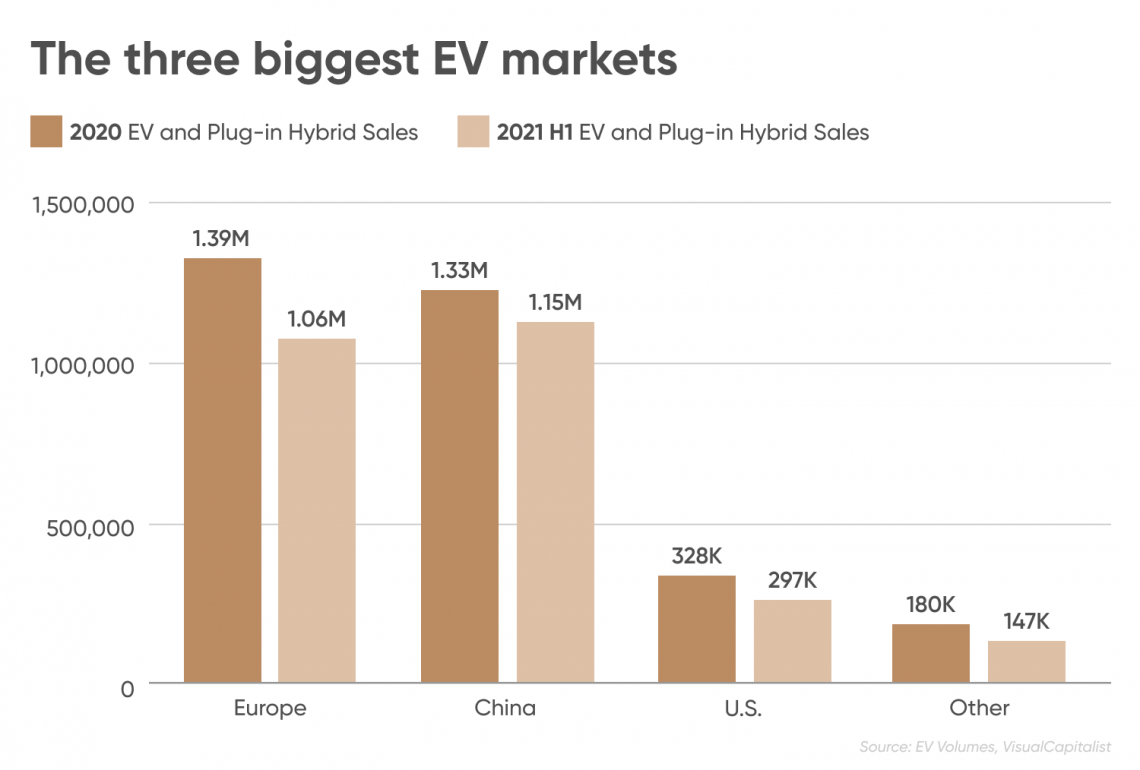 The long-term EV stock outlook faces high risks, however, as there are strong barriers to entry in the automotive market and a global adoption of EVs is far from certain.

“Lots of companies say they intend to replicate Tesla's success, but in our view, most of these companies will fail,” analysts at investment bank Piper Sandler wrote in a recent note to clients.

“This is because they rely too heavily on supply chain partners, and they lack the expertise (and the courage) to develop their own software, semiconductors, batteries, charging networks, and direct-to-consumer business models.”

Investors looking for  electric car companies to invest in for 2022 could start with considering the world’s top pure-play EV manufacturers by market capitalization.

This list of the biggest stocks for electric vehicles is dominated by Chinese and American EV stocks, as manufacturers in the two world’s biggest economies have been pioneers in establishing large-scale facilities to meet the anticipated EV demand.

Leading the most popular EV stocks, Tesla (TSLA)  was the first US car manufacturer to launch a public stock market listing in more than 50 years, signalling a shift in the automotive industry.

Tesla reported record production of 237,823 vehicles in the third quarter, despite an ongoing semiconductor supply shortage, which has disrupted automotive manufacturing globally.

Tesla produces its own components, such as semiconductor chips and batteries, while other manufacturers rely on producers in China.

The stock has since slipped back below $1,000 a share. Tesla’s CEO, Elon Musk, has sold off some of his stock options. The financial markets have come under pressure from high inflation and the US Federal Reserve (Fed) beginning to taper its asset purchases.

Much is made lately of unrealized gains being a means of tax avoidance, so I propose selling 10% of my Tesla stock.

Do you support this?

The average twelve-month analyst price target is $798.24, ranging from a low target of $209 and a high of $1,580, according to data compiled by MarketBeat.

Analysts at Deutsche Bank reiterated their ‘buy’ rating on 14 December, with a price target of $1,000.

“We continue to see large upside to 2022 consensus expectations, depending on execution of new factories ramp-up, and supply chain bottlenecks. Mid-term, we believe Tesla’s impressive trajectory for its battery technology, capacity and especially cost will continue to accelerate the world’s shift to electric vehicles and extend Tesla’s lead considerably.” 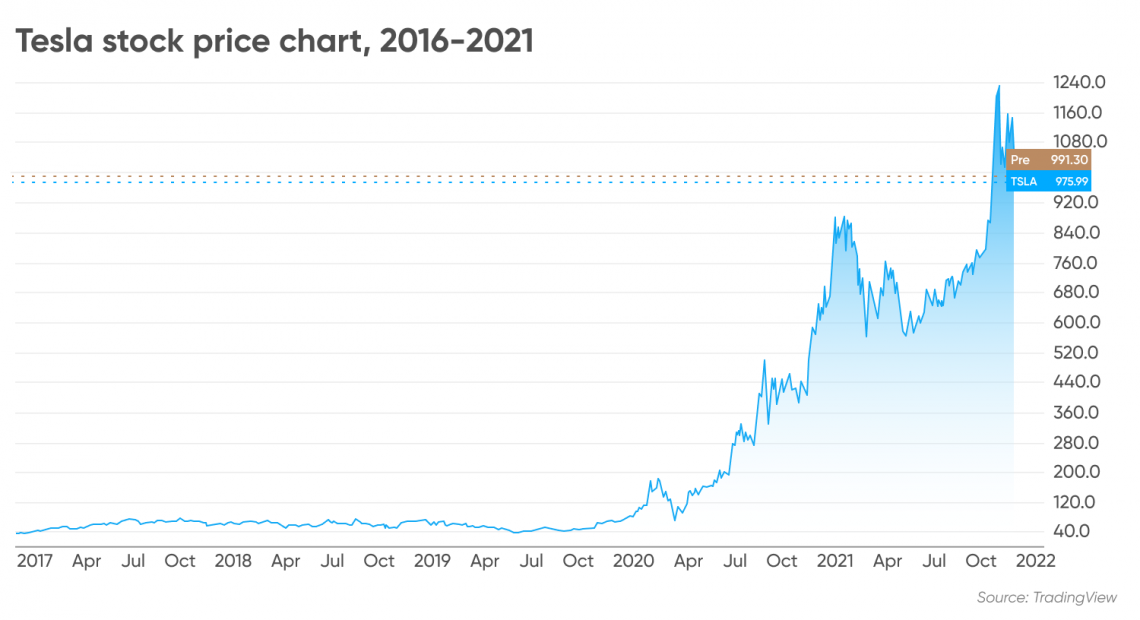 BYD is China’s largest electric vehicle and battery manufacturer, making it one of the top stocks in the EV sector. Its EV production climbed by 219.8% in the January-November period to more than 500,000 vehicles, according to a company announcement.

The company said in a recent investor conference call that it’s targeting 1.1m to 1.2m battery EV and plug-in hybrid sales in 2022, of which it expects 600,000 to be battery electric. BYD’s market share in China is 17.8%, ahead of SAIC-GM-Wuling and Tesla. The increase in sales would raise its share to 25%.

BYD’s share price has taken off since spring 2020 as its EV production and sales have expanded. The price closed at an all-time high of HK$317 for two consecutive sessions on 22-23 November. The average price target from analysts is HK$306.03, ranging from a low of HK$198.20 and a high of HK$377.58 a share, according to data compiled by the Wall Street Journal.

Backed by Amazon and Ford, US-based Rivian (RIVN) made waves on the stock market by becoming one of the top electric car stocks in November after one of the biggest initial public offerings (IPOs) of the year.

Analysts at Goldman Sachs initiated coverage on the stock with a neutral rating and a price target of $94, writing in a note to clients that the company “has an attractive product set” and “is well-positioned in the industry”.

However, the analysts are cautious on whether Rivian is one of the most suitable EV stocks to own, noting that “the automotive industry has historically been difficult for new entrants to scale, including in EVs (e.g., Tesla has faced delays on product launches). Rivian is still in the early stages of its ramp, and while the company has a team with industry veterans, the supply chain environment remains challenging.” 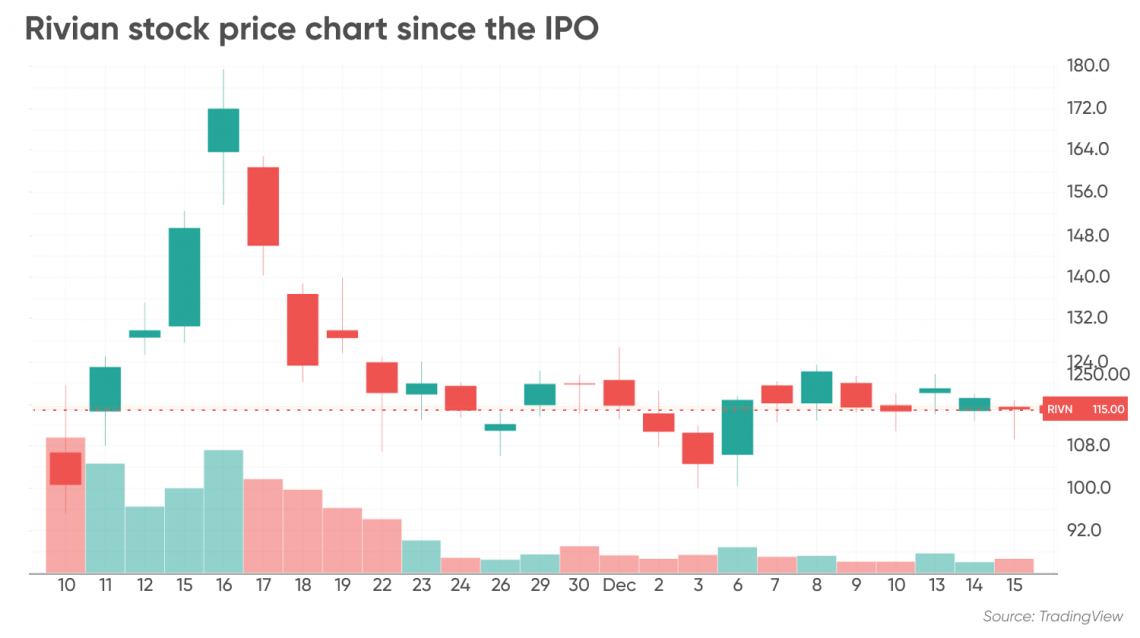 US-based Lucid (LCID) went public in July through a merger with special purpose acquisition company (SPAC) CCIV, rather than a traditional IPO.

The stock price rose on its first day of trading, rising by around 10% to $26.83 a share. But it shed value, falling to $17.79 on 1 September. The price then began to rebound and made strong gains in late October after the company announced on 27 October that it would make its first vehicle deliveries to customers on 30 October.

The share price rose from $27.02 on 27 October to $35.48 on 28 October, extending the gains to reach the $55 level in November as the Rivian IPO boosted investor interest in EV-related stocks.

The average analyst price target for the stock is $36.75, with a low estimate of $14 and a high of $60, data from MarketBeat shows. Analysts at Bank of America raised their price target from $30 to $60 on 10 November, while Morgan Stanley lifted their target from $12 to $16 while rating the stock underweight. 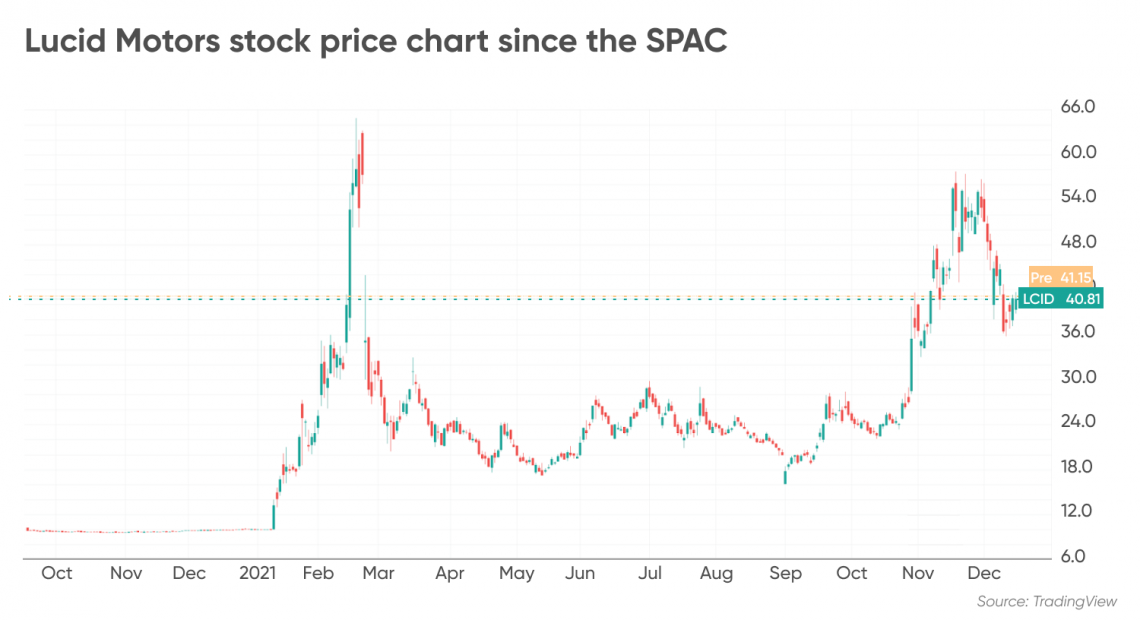 China-based NIO has seen its share price decline by more than 39% on NYSE year to date, as concerns about the Chinese government’s crackdown on US-listed companies has increased caution among investors.

The possibility that the Chinese government or the US Securities and Exchange Commission (SEC) could force Chinese companies to delist their shares from US exchanges has increased after ride-hailing firm Didi said it would delist its shares.

In addition, concerns about the impact of the debt default of Chinese real estate giant Evergrande have further weighed on Chinese electric vehicle shares.

The average share price target from analysts is $65.90, ranging from $45 to $87 a share, according to MarketBeat data.

Analysts at Deutsche Bank have a ‘buy’ rating and a 12-month price target of $70, noting that the company appears to be hiring management in Europe in anticipation of building manufacturing capacity in the region.

NIO entered the market in Norway this year, and plans to launch in five more European countries in 2022. 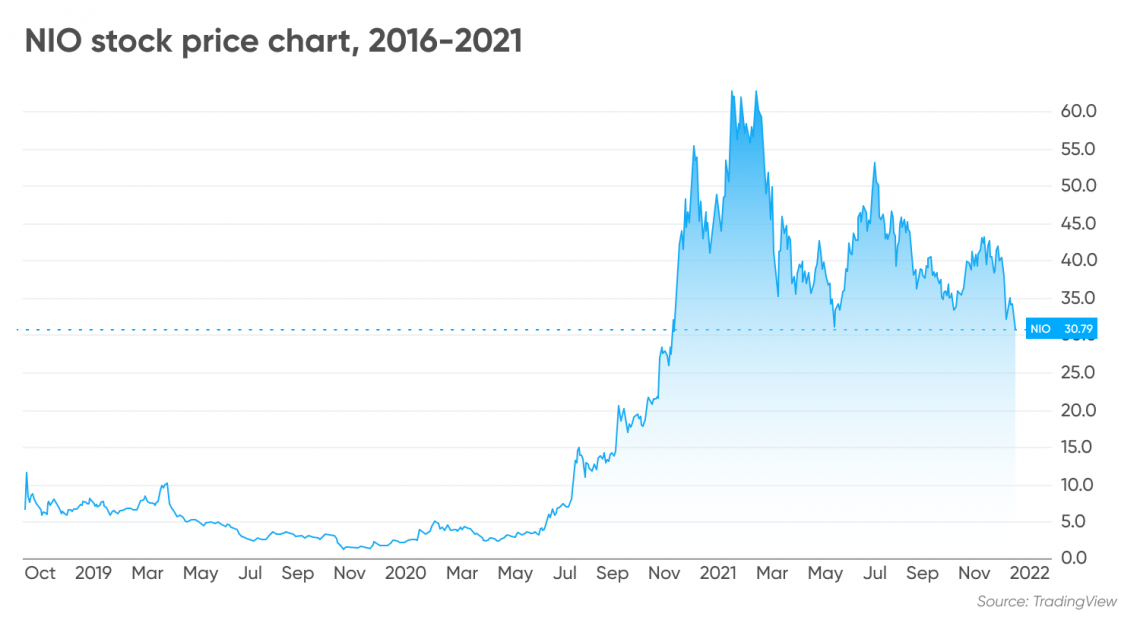 Note that analyst predictions can be wrong. You should always conduct your own research before making any investment or trading decision.

Read more: XPeng stock forecast: is there room for growth?