March 9, 2020 is definitely a day to remember for all the stock market participants. Eleven years ago, on March 9, 2009, the market experienced its lowest close during the Great Recession. Despite a number of turbulent events and market corrections during the past years, the market managed to stay bullish. Then a Black Monday 2020 happened.

For the first time since 2008, Wall Street suffered a real “crash”, when all the three major stock market indices experienced one of their largest losses in history.

On March 9, right after the market opened, stocks dropped 7 per cent within five minutes, which triggered an event called a circuit breaker. It is a very rare incident, which stops trades for 15 minutes, meaning that the stock market shuts down.

When the closing bell rang, the Dow Jones showed a 2,014-point drop, which is the largest in its 123 years’ history and equates to a 7.79 per cent decrease. Meanwhile, the tach-laden Nasdaq Composite and a broader S&P 500 fell 625 and 226 points respectively, beating their previous largest single-day declines. It means that the Nasdaq shed 7.29 per cent whereas the S&P gave back 7.6 per cent loss.

The Volatility index, known as the VIX, surged to a high of 23.94 on a scale of 1-100, when 20 represents its historic average. Almost 35 per cent gain put the VIX for its highest value since August.

What is your sentiment on US30?

The ongoing coronavirus threat is named as the number-one reason behind the Monday crash. Although investors have not seen big slowdowns in the US economy yet, they are still worried about the virus’s impact in perspective, as with the virus spread more and more people are going to be stuck at home, being pulled out of economic activity. From sick pays to loans, owners of medium and small businesses also get seriously affected by the epidemic.

The fears are aggravated by the global situation, as China and Italy were forced to take strict quarantine measures. The stocks in Europe are attempting to rebound after dropping about 8 per cent last week, as the number of coronavirus cases continues to rise.

According to the World Health Organisation’s report, as of March 9, 2020 there were 110,000 confirmed cases, which caused 3,800 deaths. What is particularly worrying is that, while China has a decreased number of newly confirmed cases, new confirmations of Covid-19 are increasing around the world.

Reason 2: panic in the oil market

Another, presumably even bigger, driver of the stock market crash on March 9, 2020, is an oil price war that broke out several days before the event.

Partially related to the virus, there has been a fall-off in demand for oil lately, which reduced its price. Factories have been idle and thousands of flights cancelled since the virus’s outbreak has become a global pandemic.

And then over the weekend, a clash between Saudi Arabia and Russia over oil production cuts caused a “perfect storm” in oil prices, making the situation much worse. The Saudis have decided to ramp up production of oil to more than 10 million barrels a day, even in the face of lower prices, and consolidate their position in the global industry.

Oil prices suffered the biggest fall since 1991. On March 9, 2020, Brent crude futures went down 22 per cent trading at $35.45 per barrel. According to the International Energy Agency, the demand for oil will contract this year for the first time since the recession of 2009, which followed the global financial crisis.

To get a clear picture of what is happening to the price of oil right now, watch a detailed Oil price analysis for March 2020 by our chief market strategist David Jones:

There is another view that the stock market crash 2020 was coming even before the coronavirus. Everyone from Wall Street to the media decided to blame the virus, but it actually spread globally weeks before the recent market crash.

At the end of January 2020, the USA, China, France, Nepal, Malaysia, Singapore, Taiwan, Vietnam and South Korea registered cases of coronavirus. The stock markets went up. On January 30, the WHO announced a global emergency. The stock markets surged. In the middle of February, the death toll in China grew up to 1,500. The stock market climbed again.

The coronavirus explains sentiment in commodities, bonds and Forex markets, but has it really crashed the market?

They did it through buying up government bonds, mortgage-backed securities and common stock. The massive “quantitative easing” may have saved the world from another Global Depression, but led to the longest bull market in history. Banks, private equity funds and hedge funds used that excess liquidity to inflate a new round of financial bubbles.

In September 2019, the credit ran out in the interbank lending markets, where banks trade overnight loans known as repo or repurchase agreements. Then, lending rates surged to 10.5 per cent, which is the highest rate since the world’s financial crisis. No one wanted to lend. The Federal Reserve chair Jerome Powell announced that the central bank would provide primary dealers with $75bn a day to help with liquidity issues – and the stock market received the money, reaching new record highs.

Amid the coronavirus fears, the Fed triggered the crash, cutting its repo operations, which caused a liquidity panic. In the meantime, the stock markets went down, with a chance to turn into a recession again.

At this point, the governments will have to step up again to rescue the world’s economy by opening its credit windows to financial market participants – lowering short-term interest rates and accepting as collateral those stocks and bonds that no one wants to buy.

According to the Washington Post, there are three things going on right now:

What happens after the stock market crash 2020

For now, it’s too soon to tell whether the worst has already passed as the markets’ daily swings make it hard to identify a clear trend. The combination of the virus and huge drop of stock prices may cause a wealth effect. People tend to spend less, as they feel poorer and less confident. 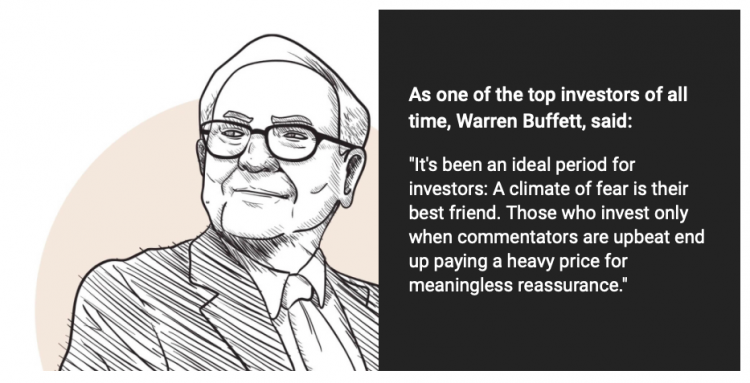 Still, the crashing stock market does not mean lack of trading opportunities. Trade with the trend, buy the dips – choose your own profitable trading strategy amid spiking volatility. With сontracts for difference you can benefit from both upward and downward market price movements. Keep a close eye on the major stock market news and analysis with Capital.com to spot the best trading opportunities within the roaring markets.