Gold has outperformed the stock market so far in 2022 due to the increased risk of impending stagflation as a consequence of the Russia-Ukraine conflict.

Inflation has continued to rise in the United States and now it is also particularly frightening in the Euro Area due to the region's skyrocketing energy costs as a result of its reliance on Russian imports.

Goldman Sachs has raised the idea of a "perfect storm" for the gold rally, lifting the target to $2,500 for the next six months, citing rising investor demand for inflation-hedged assets and resilient consumption in Asia.

Looking closely at the gold-US rates relationship, the inverse link between gold and real yields has re-established in recent weeks, and so a rise in market expectations of Fed rate increases may act as a drag on gold's rally.

A critical factor in this case will be whether the Fed proceeds gradually with rate increases, as Jerome Powell recently suggested, or if it matches market expectations.

Meanwhile, the slope of the US Treasury curve has never been flatter since March 2020, indicating increased market worry about an economic slowdown. Over the previous 50 years, each US recession has always been preceded by an inversion of the US yield curve.

Gold has strengthened relative to the S&P 500 since the beginning of the year and the gold-to-S&P 500 ratio has extended upwards since the Russian invasion of Ukraine.

Concerns about war and stagflation have traditionally been detrimental to growth expectations, dimming investor sentiment toward the stock market. On the other hand, precious metals have historically been perceived as safe havens during periods of elevated economic and geopolitical uncertainties. 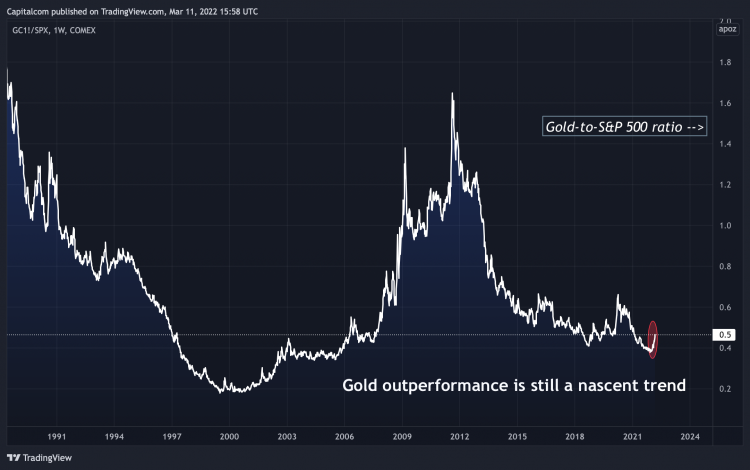 In a recent interview on Bloomberg, Jeffrey Currie, head of commodities research at Goldman Sachs, predicted a “perfect storm” that might push gold prices to $2,500 in 2022.

Gold prices might be pushed up by three concurrent factors:

Currie noted that inflows to gold ETFs have been linked with expectations of a US recession, which are likely to increase in the coming months as the US economy suffers.

The expert believes that central bank demand for gold will reach a record high in the second half of 2022, as central banks worldwide have both strong diversification and geopolitical incentives to convert reserves to gold.

Finally, consumer demand is quite resilient and should continue to strengthen as Asia's GDP continues to recover, with China delivering policy stimulus and India recovering from Covid and not yet tightening policy.

Gold and real yields back together: Will breakeven rise further?

The negative correlation between gold and long-term real rates - the real yield on 10-year Treasury inflation-protected securities (TIPS) – has re-emerged in recent weeks, after the link weakened towards the end of 2021.

This aspect aided the gold surge, since gold is a non-yielding asset that benefits from negative real interest rates.

However, with breakeven rates already at all-time highs - the market is pricing in annual inflation of 2.9 % for the next decade – only additional inflationary pressures (on top of those already present in the price) have the potential to drive the breakeven rate higher and real yields lower.

Gold and real yields together again 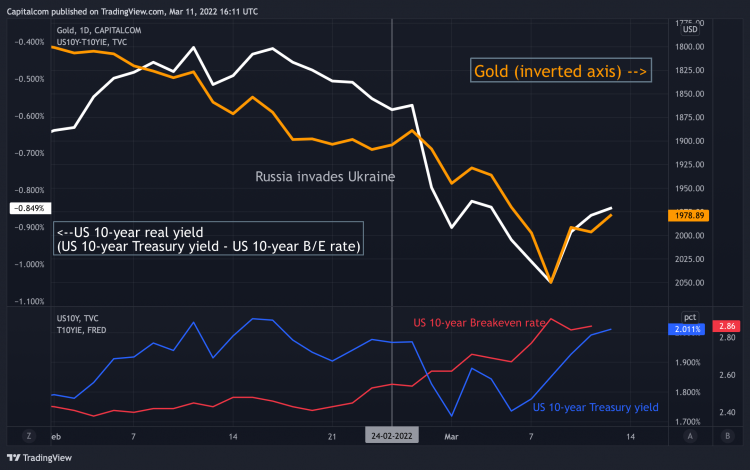 Stagflation looms: What will the Fed do now?

All eyes will now be on the next Federal Reserve meeting, which will face the arduous task of managing runaway inflation, at its highest since December 1981, and at the same time the possible worsening of economic sentiment due to the repercussions of the war in Ukraine.

A 25 basis-point interest rate hike is a close call for next week, but all the focus will be on the pace of hikes thereafter.

Market expectations for faster rate hikes resumed following the release of February's US consumer price index, although concerns about an economic downturn have never been greater since March 2020, according to the slope of the US Treasury curve.

There is one unbreakable law here: Whenever the US 2-year yield surpassed the 10-year yield, inverting the yield curve, a recession always occurred within two years.

Slope of the US yield curve (10-year minus 2-year Treasury yield) and US recessions – Credit: Federal Reserve St. Louis https://fred.stlouisfed.org/graph/?g=MPkQ

Will oil hit $200? What effect would that have on markets?

Capital.com Stagflation and war: A 'perfect storm' for a gold rally?