Precious metals plunged on Friday morning, ending the week on a gloomy note, with gold, silver and platinum all down, pressured by a stronger US dollar (DXY) and rising US Treasury yields. However, palladium was still up.

According to Piero Cingari, analyst at Capital.com, “Over the past month, precious metals have drifted sideways in a backdrop of contained volatility, with gold trading within a narrow range of $1,800 to $1,880 and silver between $20.9 and $22.5. Relatively speaking, the resilience of precious metals is remarkable, especially when compared to the volatility of the stock and bond markets.”

Cingari added: “The gold-to-S&P 500 index ratio, which gauges the yellow metal’s relative strength against the stock index of the 500 most capitalised companies in the United States, is on an upward trend and has just hit January 2021 highs. 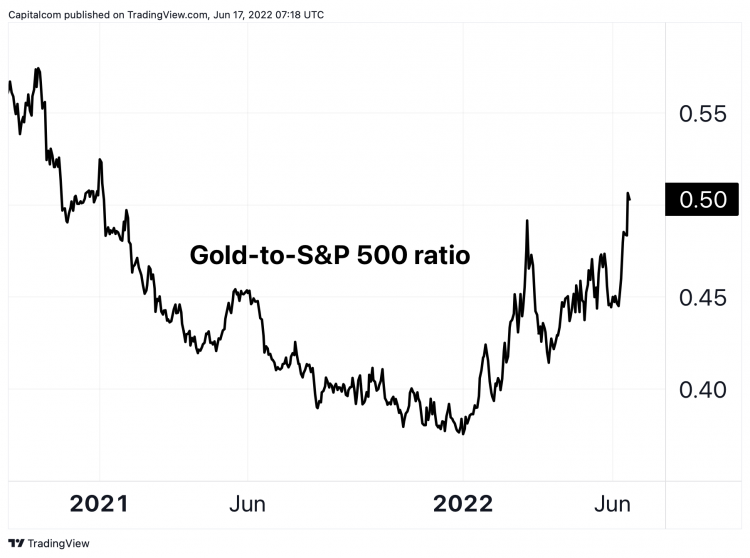 Silver fell 0.2% to $21.8 per troy ounce, bottoming out below the psychologically important $22 per troy ounce level and approaching a near two-year low.

US 10-year Treasury yields climbed to 3.2%, still holding steady above the critical 3% level.

Platinum edged down 0.8% to $943 per troy ounce, hovering near a six-week low and trading almost 20% down from the highs seen earlier in March.

Palladium inched up 0.2% to $1,882 per troy ounce, but still lingered uncomfortably close to a near five-month low, following continuing disappointing demand from the Chinese auto manufacturing sector for auto catalysts.

Aluminum fell 0.2% to $2500 per tonne, around a one-year low, following the industrial metal approaching oversold levels.

Iron ore retreated 0.8% to $131 per tonne, falling to around a three-week low, following renewed COVID-19 lockdowns in industrial parts of Shanghai.

Gold: Kinross Gold (KGC) has recently sold its Russian assets to Highland Gold Mining, for half the previously agreed price.

Iron ore: China has recently revealed that in order to combat Australia’s hold on the iron ore market, it will be setting up a centralized iron ore buyer.

Platinum: PwC has recently suggested that miners try to use the profits they reaped from 2021, to bolster the future of critical metals, such as platinum.

Rio Tinto (RIOgb) is currently conducting investigations following an employee at the Kitimat site getting injured and being airlifted in a crucial condition.

BHP (BHP) has just announced that it plans to wrap up its thermal coal following a lack of buyers.

Antofagasta (ANTO) has recently revealed that it expects its full-year guidance to be much lower than expected.