The price of platinum has surged above its pre-pandemic highs since 2021 started, as the imbalance between demand and supply levels has kept the post-pandemic bull run going.

With Covid-19 restrictions and a weaker dollar knee-capping suppliers’ capacity to deliver higher volumes, along with higher demand coming from the automotive industry and from investors seeking to hoard precious metal amid inflation worries, the short-term platinum price outlook remains positive, although traders should keep an eye on how certain factors that are currently influencing the price will behave in the coming months.

Here’s a platinum price forecast – a closer look at the catalysts that are driving the uptrend to get a sense of the direction of the platinum price in 2021.

The price of platinum had failed to clear the $1,040 threshold for more than three years, responding negatively to each rejection in the past, while bulls finally managed to push the price above that resistance in recent days amid the continuation of a supply/demand imbalance caused by the pandemic along with other variables in play.

According to a recent report from the World Platinum Investment Council (WPIC), platinum supply levels were five per cent lower during the third quarter of 2020, compared to the same period in 2019, while the annual decline was 21 per cent based on the council’s full-year estimate.

Meanwhile, the demand for the precious metal only retreated five per cent during the year – again, based on the council’s full-year forecasts – which created a significant imbalance in the market, as demand outpaced supply throughout 2020.

A significant surge in investment demand was one of the drivers for this imbalance, as investors turned to platinum and other precious metals to hedge their wealth against the potential inflationary impact of highly accommodative monetary policies around the world.

In this regard, the council estimated that investment demand for platinum bars and coins surged by 123 per cent by the end of 2020, compared to a year ago, while the total increase in demand from the investment segment ended the year 32 per cent higher.

Moreover, during the third quarter of the year, an important bounce in the demand from the automotive sector kept contributing to the annual imbalance in supply and demand levels for platinum, while the appearance of a new Covid-19 strain in South Africa could prolong the disruption caused by the virus in the supply chain of the precious metal, as the country accounts for roughly 70 per cent of the global output. 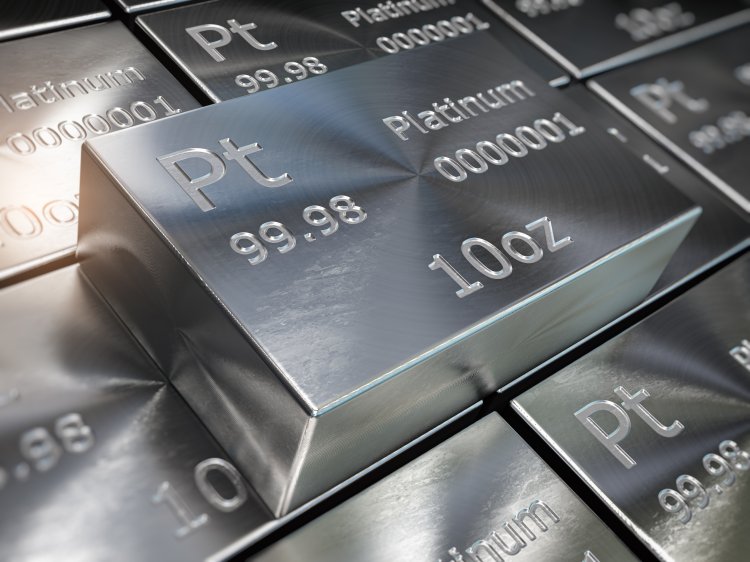 The Q3 report from the WPIC shows how the current supply/demand imbalance could spill over to 2021, as the pandemic situation continues to be an obstacle for miners in South Africa.

Meanwhile, the appetite for precious metals as a potential store of value in the wake of unprecedented levels of monetary easing – which could lead to a spike in inflation rates across the world – may continue into the years following 2021.

Finally, a seemingly imminent shift towards renewable sources of energy, including hydrogen fuel cells, which require a significant amount of platinum to function, could also provide a short-term boost to the price of platinum, which reinforces bullish platinum price predictions for 2021 and possibly beyond. 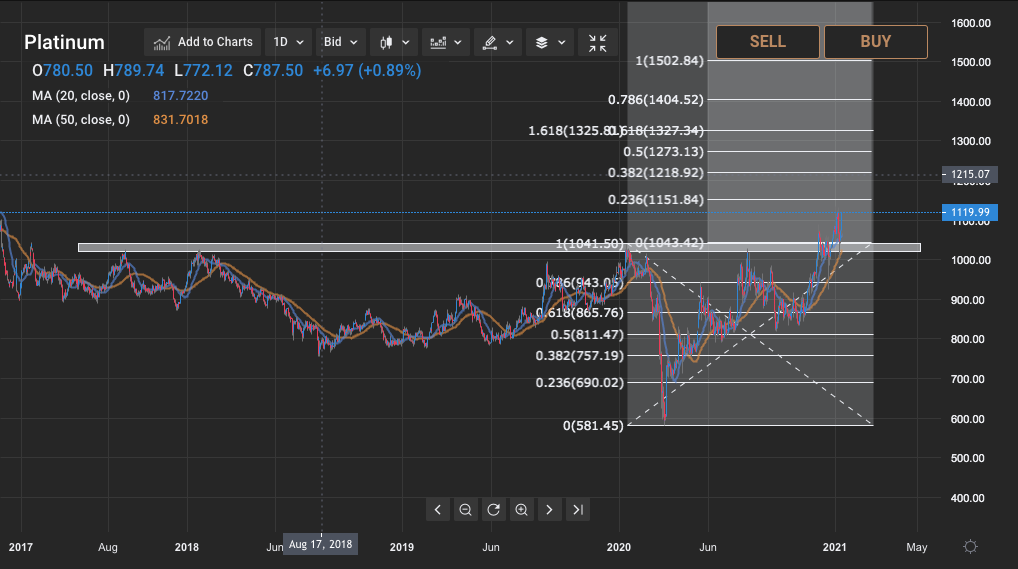 The chart above shows how the latest uptrend has already broken above that long-dated $1,040 ceiling, with the price now approaching a first target of $1,150 per ounce if the bull run continues.

This upward move is being accompanied by a surging 20-day SMA, although there is a worrying bearish divergence in the RSI that could lead to a short-term pullback if the momentum for the precious metal temporarily fades. 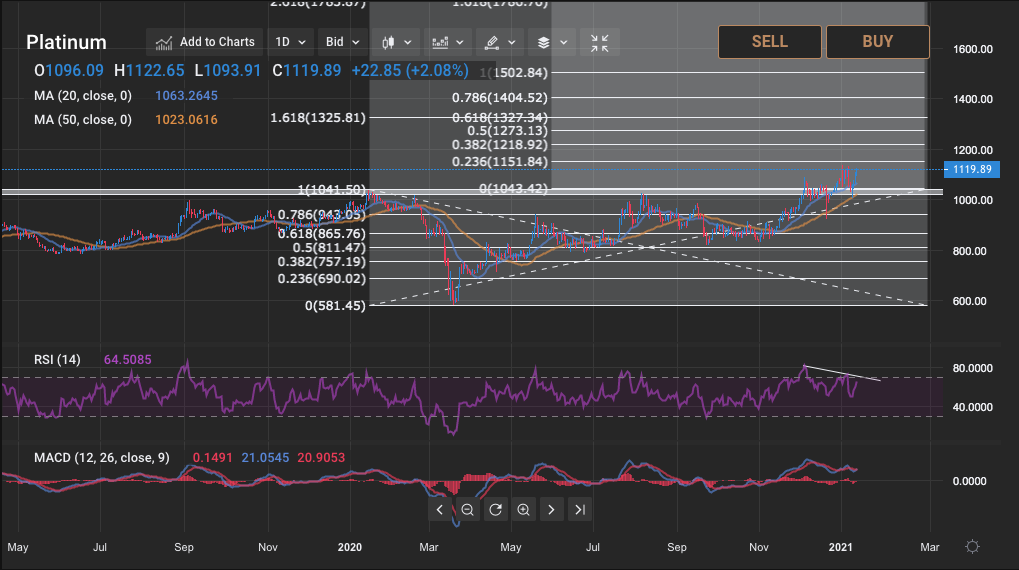 That said, one of the most important catalysts for platinum prices at the moment seems to be the Covid-19 situation in South Africa, as the reintroduction of shutdowns in the mining sector could worsen the supply/demand imbalance indicated by the WPIC report, with the country already moving to alert level 3 it its five-tier system.

If that alert level were to be moved to level 4 or 5 (moderate to high spread levels with low health system readiness) the impact on the country’s mining industry in the short-term could be quite severe – which would result in further upside pressure for the price of platinum.

That target could serve as a plausible Platinum futures price prediction for 2021, based on the current positive backdrop, while a correction at this point will probably be short-lived as the fundamentals are all pointing to higher platinum prices.

Will platinum prices rise in 2021?

Although nobody can predict what will happen in the financial markets, a closer look at platinum’s fundamental drivers reinforce the thesis that the precious metal is heading to new highs amid a strong supply/demand imbalance and a worsening virus situation in South Africa.

That said, the strength of the US dollar against the rand could cap the advance of platinum during the year, although the increasingly accommodative monetary policy from the US Federal Reserve and the promise of further fiscal stimulus from President-elect Joe Biden might weigh on the dollar’s advance against South Africa’s official currency.

Last year, the dollar appreciated nearly five per cent against the rand, while platinum prices advanced more than 11 per cent during the same period.

If the current uptrend in the USD/ZAR pair were to reverse, miners would probably react by decreasing their output in order to ramp up the price of the precious metal higher to increase their profit margins in rands.

Therefore, the performance of USD/ZAR is also a variable to keep an eye on to draft further platinum price forecasts.

Read more: Marks and Spencer share price forecast for 2021: is the stock a recovery play?