Pfizer and BioNTech flooded the markets with a strong wave of optimism in November, when the American drugmaker announced that its Covid-19 vaccine was effective in 90 per cent of the cases within a small subset of candidates that were part of the company’s Phase 3 clinical trials.

News of a coronavirus vaccine pushed up broad-market indices around the world, along with commodities and other risky assets, to post significant single-day gains on Monday, while Pfizer shares jumped 7.7 per cent along with BioNTech shares, which closed the day 14 per cent higher amid the news.

What was Pfizer’s announcement all about?

The Pfizer vaccine news, announced by none other than the firm’s chairman and CEO Dr Albert Bourla, indicated that in a small interim analysis conducted with 94 candidates that tested positive for Covid-19, the tests found that 90 per cent of the patients who received the vaccine had a strong immune response to the virus, which means that they were not infected.

Those results were seen as a very positive development in the fight against the virus, which has caused almost 1,300,000 deaths so far this year, as scientists from all over the world had already said their best hopes were for a vaccine that showed a level of efficacy around 75 per cent, while others said they would conform with 50 to 60 per cent.

American drugmaker Pfizer and Germany’s BioNTech have been working alongside in the vaccine development process and they will split the proceeds from the sale of the treatment once it is approved by regulators around the world, including the United States Food and Drugs Administration (FDA). How much do Pfizer and BioNTech stand to make from the vaccine?

According to estimates from US investment bank Morgan Stanley, the firms stand to make around $13bn (£9.9bn, €11bn) combined next year from selling the vaccine, which means that they will each bank around $6.5bn each if these estimates turn out to be true.

The price of each dose is expected to be around $20 in the US and two doses will be required to guarantee the highest level of immunity.

To put this sales bump into context, Pfizer’s sales last year were almost $52bn, which means that the vaccine could boost the pharmaceutical’s giant top line by around 10 per cent, while the impact on the firm’s bottom line is hard to estimate amid the financial and operational complexities of a multinational like Pfizer.

With that in mind, analysts are likely to revisit their Pfizer stock forecast in short notice to incorporate the impact that an effective vaccine – possibly the most effective so far – would have on the Pfizer shares price.

Any subsequent price target hikes could result in significant upside for the stock on relatively short notice.

Meanwhile, BioNTech had total revenues of nearly €109m last year, which would make the possibility of developing an effective Covid-19 vaccine alongside Pfizer a home run for the German biotech firm.

That said, the company’s equity is being valued at $27bn at the moment, which is around four times the amount in sales that the vaccine would bring next year according to Morgan Stanley’s estimates. Aside from that, BioNTech lost €179m last year. 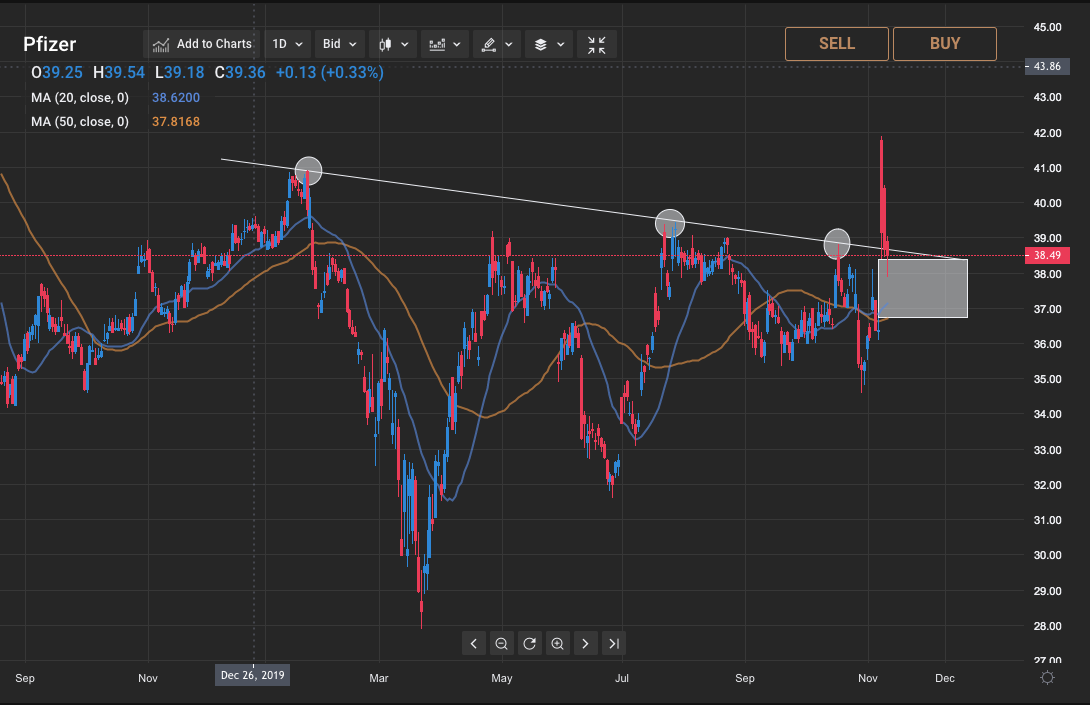 From a technical standpoint, the price action seen this Monday showed that market players were reluctant to push Pfizer shares above the $42 mark. Although the stock moved to those levels during the day, the price settled below, while closing at $38.5, or 8.3 per cent below Monday’s intraday highs.

Today’s price action also filled a portion of Monday’s bullish gap, which is not necessarily a good thing. The following sessions would probably tell us more about where the shares may be headed as the fulfilment of this entire gap could mean that market players are not buying the whole vaccine story just yet.

Meanwhile, in other Pfizer covid vaccine news, the firm’s CEO reportedly sold a total of $5.6m worth of the company’s stock in the same day that he made this vaccine announcement, although the executive still holds a total of 81,812 shares of the drugmaker, valued roughly $3.15m based on today’s closing price.

According to financial data provider Koyfin, Pfizer’s 12-month consensus price target currently sits at $42.3, while shares of the American drugmaker are trading at 13 times its next-12-months earnings. Pfizer made $16.27bn in net income last year, resulting in earnings per share of $1.65. 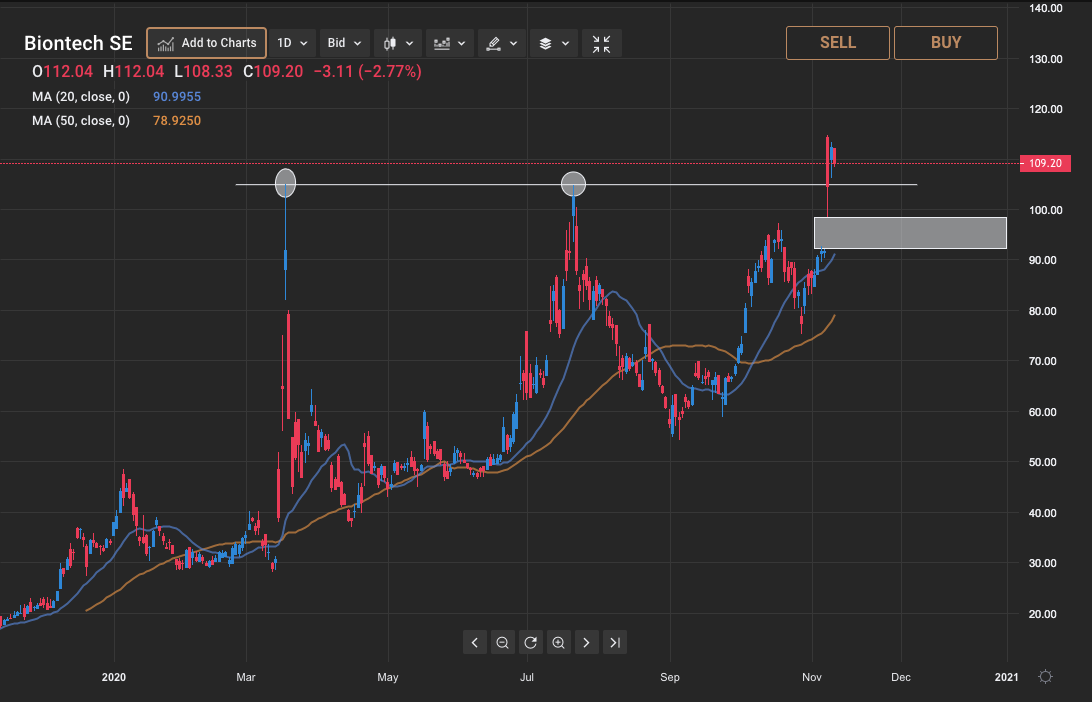 BioNTech shares successfully broke above their $105 resistance seen in March and July, with the price of the stock closing Monday’s session right above that mark, while the firm’s American Depositary Receipts (ADR) have settled higher at $109 in the last two sessions.

At this point, investors should be aware that the only element backing such a sky-high valuation for BioNTech is an effective vaccine that delivers significant revenues for the company.

Any BioNTech share news that put that revenue stream into question could result in a severe plunge in the stock price.

Moreover, the actual amount of revenue coming from the vaccine is also a factor to analyse in depth, as the current BioNTech stock forecast – such as the one I mentioned earlier from Morgan Stanley – are assuming a lot of “ifs”, while the reality of things can be quite different than those expectations.

It is also worth noting that the last three times that BioNTech shares have seen an overbought RSI, the upswings have been greeted by sharp sell-offs as market players took profits after the initial momentum started to fade.

There’s an old saying in Wall Street that goes: “Buy the rumour, sell the news.”

Vaccine headlines pushed the price of growth stocks, such as those in the tech and healthcare sectors, for months after they rebounded off their March lows.

The news from Pfizer is now potentially materialising those “hopes”, which means that stocks could do the exact opposite to what most people would expect, as those news reports were already priced in and market players could now “sell the news”, as they have been “buying the rumour” for quite a while.

With that in mind, although the vaccine is not yet a done deal, market players could be preparing to rotate into the next “growth” sector now, while shunning stocks that have delivered strong gains during the pandemic, as they offer little upside.

Keep following the latest Pfizer stock news and build your own BioNTech stock prediction with Capital.com. While the healthcare market is extremely volatile, try to benefit from both stocks’ price fluctuations with CFDs.