The Reserve Bank of New Zealand (RBNZ) will be meeting overnight to decide the next round of action regarding its monetary policy. The consensus is for another 50bps hike to the Overnight Cash Rate (OCR), its 5th consecutive one, taking the rate up to 3.50%, the highest level since April 2015.

As it stands, markets are pricing in a 30% chance of a bigger 75bps hike, to 3.75%, which would be the highest since late 2008. The commentary surrounding previous meetings has suggested further hikes are needed to bring inflation back to its target rate, and the latest growth data suggests that New Zealand still has a robust economy, with Q2 GDP showing quarterly growth of 1.7%, above expectations of 1%.

But the latest retail sales data showed a quarterly drop of 2.3% in Q2, which follows the 0.9% drop seen in the first quarter. This is suggesting consumers are likely feeling the pinch of higher inflation and have cut back slightly on discretionary spending, but this data alone is unlikely to shift the policy stance of the RBNZ.

The latest projections showed the OCR peaking at 4% by year-end. There is a high chance of this happening, considering there is still another meeting after tomorrow before the end of December, with a full percentage point hike expected at the end of these two meetings.

What is your sentiment on NZD/USD?

Give NZD/USD a try 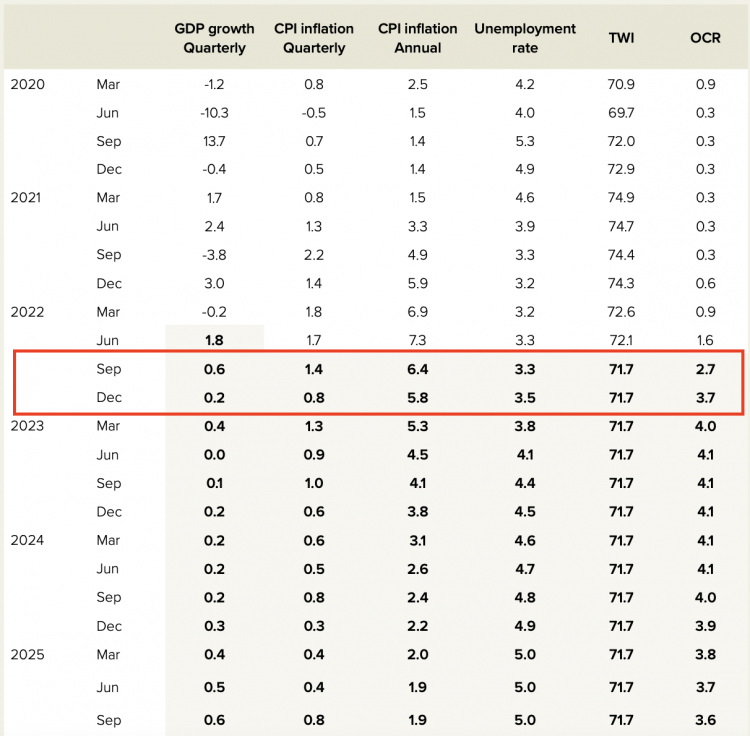 The Reserve Bank of Australia (RBA) met on Tuesday and decided to start lifting the foot of the hiking pedal, delivering a 25bps hike to 2.6%, after 4 consecutive 50bps hikes from June to September. The argument in favour of the smaller-than-expected hike (50bps was a given before the meeting) has come from the effects that higher rates are having on the housing market, with the full extent of higher rates on mortgage payments expected to be seen further down the line.

Because of this unexpected decision, markets are pricing in lower rates by year-end, with peak rates expected at 3.50% next year, down from 4.10% last week. But the labour market remains robust, as well as consumer spending, and with inflation expected to continue elevated, it may be seen that the RBA is taking the longer route to get to the same point, which could be a detriment to the economy.

Nonetheless, this change in tactic does raise some thought about the possibility that the RBNZ may also do the same. At the end of the day, they are still raising rates to combat inflation but are doing it more gradually, in an attempt to see the effects on the economy before making further bold moves. Given the similarities between both economies and policy decisions, there is a chance that we see some hawkish disappointment at tomorrow’s meeting, whether that be a smaller rate hike or weaker projections going forward.

Of course, a smaller rate hike will have a greater impact on the New Zealand Dollar, but an attempt to start lowering expectations for the next few months can also weigh on the Kiwi even if we do see 50bps. The likelihood of the disappointment is slightly limited given the comments from Governor Orr at the last meeting, which suggested that the current pace of hikes remained the best means to tighten financing conditions, but the chance of a bearish reaction in NZD is still something to keep in mind.

Another thing to note is a large amount of time between the last meeting of the year, which will happen in November, and the first one in 2023, scheduled for February. The gap of almost 3 months does give the RBNZ a chance to wait it out and see how everyone else reacts, and so this also pushes in favour of two 50bps hikes at the two remaining meetings in 2022, before the bank steps back and evaluates how the economy is reacting and adapting.

But the focus of this meeting, which will not be accompanied by a full monetary policy statement, will be on whether there is any sign that the RBNZ is veering away from its August forecasts.

Up until last week, the US dollar has been on a tear, pushing above 20-year highs on the back of a hawkish Fed. This has meant many currencies have been eaten alive, and that has been no different for the kiwi. NZD/USD has been dropping consistently since the April highs, but the longer-term bearish trend has been in place since early 2021 when the USD started to pick up momentum.

The risk appetite has helped the NZD stay afloat over the last few sessions, helped as well by the drop in US yields and subsequent retracement in the USD. The belief that the Fed will need to start showing more leniency when tightening policy is partially to blame for this, but the reality is that it simply looks like a pause for breath in the trend and the USD will resume its push higher in due course.

The weaker Kiwi makes imports more expensive, which doesn’t help with soaring inflation, and so it’s likely that the RBNZ is keeping an eye on the market when mulling its policy options. For now, Governor Orr seems pretty relaxed when talking about the decline in the currency, but he is likely unhappy about it.

The 4-hour chart is now holding above its 20-SMA, whilst attempting to breach above the 50-SMA as two-way trade has brought up some resistance. The break in the USD rally has offered the Kiwis a chance to move higher, but there are still some technical barriers to be broken for buyers to feel more comfortable. The last few sessions have evidenced short-term resistance at 0.5750, the first hurdle to be cleared before attempting to get back above 0.58, where the 4-hour 100-SMA is currently converging.

AUD/NZD has started to dip from its yearly highs, aided mostly by the disappointment from the RBA. As can be seen in the chart, the yield differential between the Australian 10-year bond and the New Zealand 10-year bond has widened after the meeting, as Australian yields have retraced. The performance of AUD/NZD has been tracking the rate differential higher, and the recent drop is suggesting a further bearish reversal in the pair.