The NSE Nifty 50 (India 50) could be volatile on Thursday with a correction likey over weekly expiry, analysts told Capital.com. “The scheduled weekly expiry may result in some whipsaws so plan accordingly,” warns Ajit Mishra, vice president (research) at Religare Broking.

Bharti Airtel share price and State Bank of India share price could react to news flow from those counters, that could influence the National Stock Exchange index.

“The buoyancy in the global markets, especially the US, combined with favourable domestic factors such as improving macros, consistent foreign flows among others are helping the markets to maintain the prevailing trend. We thus reiterate our bullish view and suggest using any intermediate dip or pause to create fresh longs,” Ajit Mishra, vice president (Research) at Religare Broking said.

“As the stance of monetary policy tightened further, it likely would become appropriate at some point to slow the pace of policy rate increases while assessing the effects of cumulative policy adjustments on economic activity and inflation, according to minutes of the Federal Open Market Committee’s July 26-27 meeting released on Wednesday.

“Any lack of strength around 17,900-18,000 levels in the next 1-2 sessions could pull Nifty below the resistance area in the short term,” said Nagaraj Shetti, technical research analyst at HDFC Securities.

“On Wednesday, a small positive candle was formed on the daily chart with minor upper and lower shadow. Technically, this pattern indicates a continuation of upside momentum in the market without any reasonable downward correction from the highs,” Shetti added. 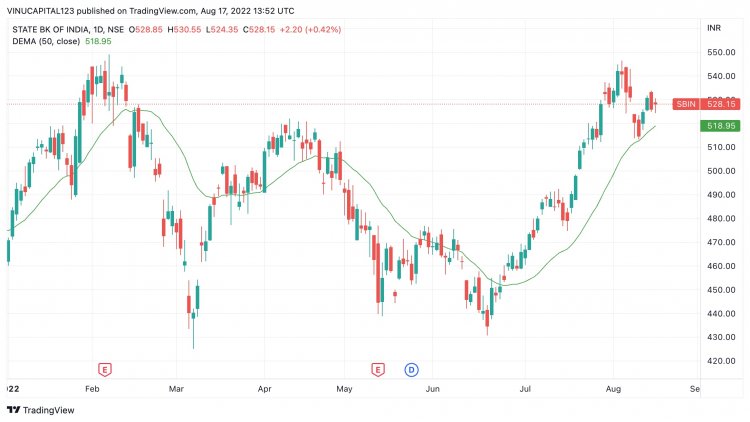 Telecom service provider Bharti Airtel on Wednesday said it has paid INR83.12bn (1.09bn) to the Department of Telecommunications towards dues for spectrum acquired in the recently concluded 5G auctions. Airtel has paid four years of spectrum dues upfront, it said in a regulatory update. The firm’s share prices closed up 2.55% at INR721.75.

On Wednesday, Nifty ended up 0.67% at 17,944.25, buoyant on positive global cues and marking its seventh consecutive rise. Among the sectors, telecom, consumer durables and information technology indices rose the most, while auto and capital goods indices fell the most.

“Asian shares were mostly higher Wednesday as regional markets looked to strong economic signs out of the US and China as drivers of growth. Markets are less than 4% off their lifetime highs. Nifty continues its relentless rise and is currently outperforming global markets.

Though there are no signs of reversal, the current uptrend is mature. On an up move 18,114 could act as a resistance, while 17,719 would be the support,” Deepak Jasani, head of retail research at HDFC Securities said.