Precious metals were fairly mixed on Friday morning, ending the week on a lacklustre note, with silver up, but platinum and palladium down. Gold was trading mostly flat, at about $1,787 per troy ounce, just shy of the critical $1,790 mark, however, was on track for its fourth consecutive week of gains.

Gold was on track for its 4th consecutive weekly rise

According to Piero Cingari, analyst at Capital.com, “University of Michigan consumer sentiment is something to keep an eye on today. Analysts expect a slight increase in August to 52.5 from 51.5 in July. However, this would still be very close to the record lows (50) set in June.

A lower-than-anticipated reading could be interpreted as a sign of further economic deceleration, thereby bolstering market expectations of a less hawkish Federal Reserve. This could provide a further boost to gold and silver prices.

A stronger-than-expected print in the US Consumer sentiment would indicate that a rebound in US economic activity is now ongoing in the third quarter, following the technical recession in the first half of the year. This could keep markets unsure about an upcoming Fed stance shift, somewhat limiting gold’s upside.

A rebound in US consumer sentiment would benefit growth-sensitive metals such as silver and copper, which, among other things, now enjoy a tailwind from the US Inflation Reduction Act, which promotes investment in green transition sectors.”

Silver traded mostly flat at $20.3 per troy ounce, with a weekly rise of about 2.2%, following gold’s footsteps, as the precious metal also benefited from a weaker US dollar (DXY).

Platinum inched lower 0.4% to $951 per troy ounce, but rallied about 2% in the last three days, following Sibanye Stillwater (SBYSF) predicting a steep drop in platinum group metals production at its US mines due to flooding. This caused palladium to also see a weekly rise of about 6.3%, trading at about $2,264 currently.

Copper dropped 1.2% to $3.6 per pound, eroding away some of the gains seen by the base metal due to lower-than-expected US inflation numbers for July. However, copper still saw gains of more than 5% since the beginning of the month. Iron ore inched lower from CNY 773 per tonne in the last trading session to CNY 771 on Friday. Aluminium dropped 0.5% to $2508 per tonne.

The US dollar (DXY) inched up from $105.1 from the previous trading session to $105.4 on Friday morning, recovering somewhat from its recent declines.

The US Treasury yields dropped 1 basis point to 2.8%.

Piero Cingari highlights, “When it comes to mining stocks, the SPDR S&P Metals and Mining ETF (XME) has shown some interesting technical signals, with prices breaking above the 200-day moving average for the first time since early February 2022.

In that instance, XME then delivered a 52% rally to the high of 18 April. For the first time since April, the daily RSI is also flirting with overbought technical levels. If the bullish price momentum continues, June’s high at $56.9 could be the next resistance to test.” 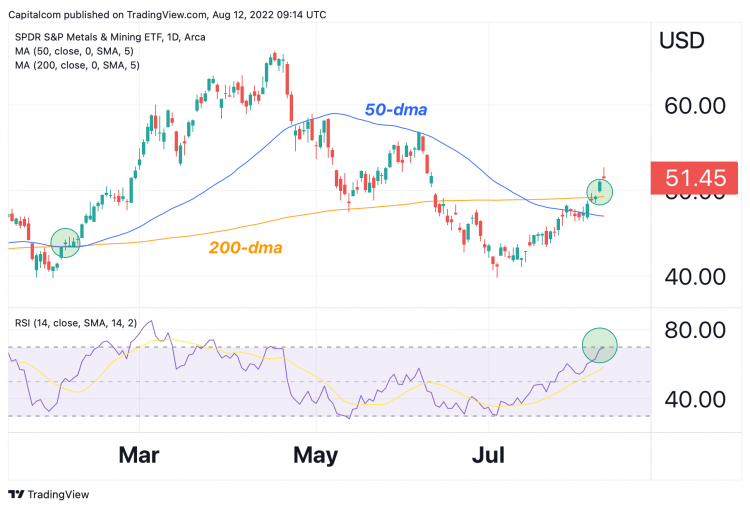 Glencore (GLEN) dropped 1.4% to GBP 4.6, with a weekly decline of about 8.7%, following the company breaking things off with a Chinese trader over copper worth about $500 million going missing.

Antofagasta (ANTO) dropped 2.4% to GBP 11.4, following the miner warning of copper mining challenges in Chile due to the country’s new tax plans.

The University of Michigan consumer sentiment index is releasing later in the day. In July, the index had inched up to about 51.5 from a record low of 50 in June. However, this month, analysts expect it to touch about 52.5.

Five central banks that are likely to raise rates in 2022