What are oscillator indicators and how do they work?

Oscillators are technical indicators that vary between two extremes. The indicator oscillates within this range and its position delivers signals determining whether a security is overbought or oversold by whether it approaches the higher or lower indicator bands respectively.

Oscillators can suggest buy and sell signals either through crossovers or divergence. A crossover is a point where the oscillator intersects the upper or lower boundaries. You can use crossovers to predict how an asset might perform in the short-term and help signal the best time to buy or sell. Divergence occurs when the price trend and the indicator move in opposite directions, this suggests that the price trend could be weakening.

What is the MACD?

The Moving Average Convergence Divergence (MACD) oscillator is a momentum indicator, designed to show the relationship between two sets of moving averages.

The MACD subtracts the longer-term EMA from the shorter-term EMA to produce an indicator that reflects both trend and momentum. The indicator consists of three elements: a MACD line, which measures the distance between two moving averages; the signal line, which identifies changes in price momentum; and the histogram, which represents the difference between the MACD and signal line.

Typically, the MACD line is calculated by subtracting the 26-unit period EMA from the 12-unit period EMA, which is plotted on the graph. A typically 9-unit EMA of the MACD line, known as the signal line, is then superimposed on top, and this can help deliver buy and sell signals. The histogram is often shown behind these two lines.

A sudden rise in the MACD, where the shorter moving average rises rapidly above the longer term EMA, indicates that the stock has been overbought and could fall back to normal. The inverse holds. 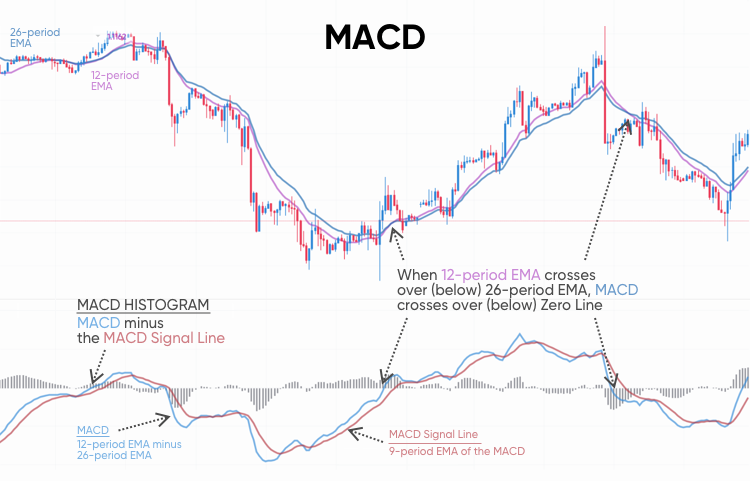 Who invented the MACD?

The MACD indicator was invented in the 1970s by professional money manager Gerald Appel. Appel worked in the investment management sector for more than thirty-five years. As well as his professional achievement, he contributed to the academic study of financial services, co-authoring over 15 books as well as publishing several academic articles. His contribution was related to the field of investment strategies and he is recognised as an expert within technical analysis.

In 1986, Thomas Aspray, a financial market analyst, added a histogram to the MACD as a way to anticipate crossovers of the MACD and signal line – an indicator of substantial moves in the price of the underlying security.

Why is the MACD useful for traders?

The MACD indicator is so widely used by traders owing to both its simplicity and reliability (relative to other oscillators). One reason the indicator is so popular is due to the fact that it provides signals indicating both the strength of the trend and when the trend is running out of steam (the turning point). Knowing how strong the indicator signals are and the direction of a trend is a valuable asset to traders.

The MACD indicator provides an accurate representation of what is happening in the market in real time. If you compare this to other technical analysis tools, such as moving average indicators, the signals can often be delayed and sometimes market sentiment will have changed before a clear signal is produced.

MACD trading: how to trade with the MACD